Hyperion: The Watcher From Above 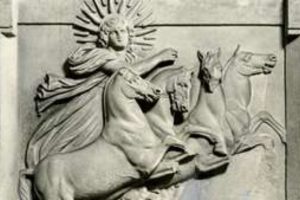 Hyperion, Titan god of heavenly light, is another first-generation Titan that is mainly relegated to obscurity. Thanks to Shakespeare, his name and his countenance are remembered. Like many of his other siblings, the story of Hyperion begins and ends before the existence of humankind. His legacy lies in the tales of his children and the occasional mention in literature.

Who Is Hyperion in Greek Mythology?

During the Golden age, Hyperion was the god of heavenly light. It is suggested that this light emanated from Hyperion himself, illuminating the universe from all directions. Only when his children were born, the light was associated with the celestial orbs of the sun and moon.

Hyperion’s name means he who watches from above. From his point of view in the heavens, he could see everything happening below on Earth and bring his light to dark places. His other moniker, “the high one,” may refer to his physical location. It may also reference his state as the eldest brother of the first-generation Titans.

Some sources infer that his ability to stand on high and watch the patterns of life unfolding led to his noticing the cycles of days, months, and years and the movements of the tides. However, his brother Crius is usually given credit for control of the seasons.

Hyperion himself was quite beautiful, wise, and stately. This description fits with Shakespeare’s metaphor “Hyperion to a satyr,” mentioned in Hamlet. The inference was that Hamlet’s father was by far a superior match when compared to his brother, Claudius.

The Creation Myth and the First-Generation Titans

Like the other first-generation Titans, the story of Hyperion begins and ends in the Golden Age, before the existence of man. There is little specific mention of Hyperion in the myths of Creation and the Titanomachy, but one can infer that he played an active role in both.

In the beginning, Chaos alone existed. From Chaos came the earliest primordial gods, including Gaia (Earth). Gaia alone conceived and brought forth Uranus (Sky). They mated and had many children, the first of which were the 12 giants known as the Titans: 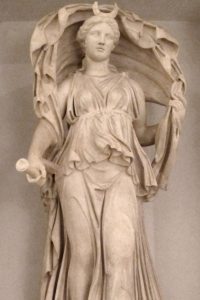 Other giant races came into being through the union of Uranus and Gaea, notably the Hecatonchires with 100 hands and 50 heads and the one-eyed Cyclopes.

Hyperion and three of his brothers were given the task of guarding the Pillars of Heaven. These were four enormous pillars located at the four corners of the Earth, holding the sky aloft. This was somewhat of a misnomer, for it is believed that the Greeks knew the world was round.

In some texts, the brothers were considered personified representations of the pillars themselves rather than the guardians. Hyperion represented the pillar in the east, which is natural, considering the sun and moon rise from that quadrant. Coeus represented the pillar in the north, Crius was responsible for the south, and Iapetus resided in the west. One could wonder why they were given this task since their parents were the Sky and Earth.

Hyperion married his sister Theia, the Titan goddess of sight. This situation seems like an excellent complement to Hyperion’s role as the watcher from above. Together, Hyperion and Theia had three children. Hyperion’s son was Helios, Titan of the Sun; he and his father are often confused with each other. The daughters of Hyperion were Selene, the goddess of the Moon, and Eos, the personification of the Dawn. Though they are technically Titans as well, they played significant roles in the later myths of Greek mythology, even after the rise of the Olympian gods.

The Titanomachy and the Fall of the Titans

When the Titans, Cyclopes, and Hecatonchires were born, Uranus was the supreme deity of the world. Upon seeing the ugliness of the Cyclopes and the Hecatonchires, or perhaps because of their massive size, Uranus threw the two races deep into the Earth, essentially shoving them back in their mother’s womb. He imprisoned them in the abyss called Tartarus. Since the Titans were smaller and comelier than their siblings, they were spared the same fate.

Their mother, Gaia, was perturbed that her children were imprisoned. She convinced her children, the Titans, to rise against Uranus and overthrow him. They all agreed, but only Cronos was willing to wield a weapon against their father.

Hyperion, Coeus, Iapetus, and Crius were able to lend vital assistance to their brother due to their positions at the four corners of the Earth. The four brothers ambushed and subdued Uranus when he came down from the cosmos to lie with Gaia. They held him down by his arms and legs while Cronos used an adamantine sickle to castrate his father. He fled back into the cosmos. Cronos threw Uranus’s testicles into the sea. The blood that fell on the oceans created other creatures such as the Furies, the Erinyes, and the Meliae. His genitals caused the sea to foam, and from that foam, the goddess Aphrodite was born.

Cronos ruled over the cosmos during what was known as the Golden Age. He became aware of a prophecy that his children would overthrow him like he defeated his father. To avoid this destiny, he ate his first five children as soon as they were born. His wife, Rhea, smuggled the sixth child away, fooling her husband into swallowing a stone instead.

This sixth child was the infant Zeus. Once Zeus was grown, he returned and disguised himself as Cronos’s cupbearer. Zeus tricked Cronos into drinking a potion which caused Cronos to vomit up the five children. They emerged full-grown from their father’s stomach and joined forces with Zeus to rise against Cronos.

The conflict continued unabated for 10 years. Some sources suggest that the Olympian gods won because Zeus released the Cyclopes and Hecatonchires from Tartarus. The Cyclopes fashioned powerful weapons for the gods, including Zeus’s lightning bolt. The Hecatonchires used their many hands to hurl mountains at the enemy. With these allies, the Olympian gods were finally able to overcome the Titans. After they won the war, Zeus condemned Hyperion and the majority of the Titans to suffer forever in Tartarus.

No complete text survives to give details of the battle, and none of the fragments mention the role Hyperion played if any. However, an abandoned poem by John Keats relates Hyperion’s thoughts about the downfall of the Titans. His speech shows a possible reluctance to admit defeat and a renewed vigor for one final battle. This view would cast Hyperion as a tragic hero of the Titanomachy.

The Light Continues Through Hyperion’s Children

As is often the case with the Titans, Hyperion himself is seldom remembered indeed, but his fame lies with the children he sired.

Eos was Hyperion’s eldest child, noted by her position as goddess of the Dawn, the first light in the sky. Furthermore, she married Astraeus, god of the Dusk. Their children included the Anemoi (the four winds) and Eosphorus (the morning star). She was depicted with rosy fingers and white-feathered wings.

Helios was the personification of the sun, known for his daily chariot ride across the sky. He is often featured in Greek myth, most notably in the tale of his son Phaethon. Helios was also the father of the Three Graces and Circe, who features in the journey of Odysseus.

While many goddesses were associated with the moon, Hyperion’s daughter Selene was the moon itself. Like her brother, she drove a chariot across the sky each night. Sources report that Selene had numerous children, some by Zeus and some by the mortal Endymion. 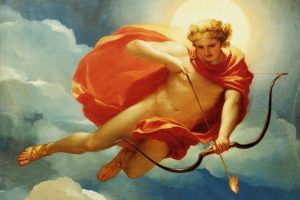 Despite Hyperion’s status as “the high one,” very little is known about him, and when he is mentioned in Greek myth, he plays a minuscule role. Here’s what we do know:

It is curious that later poets like Shakespeare and Keats continued to be fascinated by Hyperion with so little information. However, we can be grateful to them for making Hyperion relatable to today’s audiences.