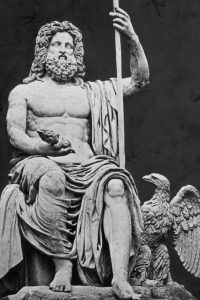 Iapetus, Titan of mortality, is regarded as one of the lesser-known deities in Greek mythology. His name is usually remembered because one of Saturn’s moons shares his name in modern times. Though Iapetus doesn’t appear in the most recognized tales of the Olympian gods, he was one of the first figures in the Creation story. He was mentioned by name in Homer’s Iliad as one of the most vicious warriors. His most important contribution was as the father of several of the more popular Titans in myth. Through his sons, he helped shape the story of humanity.

Who Is Iapetus in Greek Mythology?

Iapetus was one of the original 12 of the mythical Titans, one of the first races on the Earth.  Known as the Titan of mortality and one of the gods governing time, he presided over the human lifespan. His name means “piercer,” or “pierced with a spear,” which is how he possibly gained his association with violent death. In the Titanomachy or the War of the Titans, he was said to be a bloodthirsty opponent.

Along with three brothers, Iapetus represented one of the four pillars separating the Earth and the Sky. These were called the Pillars of Heaven. After the great war against the Olympians, Iapetus was imprisoned, and his son Atlas took his place.

Some sources suggest that Iapetus was also associated with Japheth, the Son of Noah. After the flood, Japheth was considered the progenitor of the Greeks, Turks, Russians, and other Indo-European peoples. This situation is complementary to the idea of Iapetus shaping humanity through the influences of his sons.

The Creation Myth: Iapetus and His Relations

The whole story of Iapetus takes place before the reign of the Olympian gods and long before the age of man. Though he had no effect on humans, two of his sons figure significantly in the myths about early man. Indeed, the story of mankind would have been much different without the contributions of the sons of Iapetus.

At the beginning of the world, there existed only the mysterious being Chaos. Chaos created a handful of primordial gods, such as Nyx (Night), Erebus (Darkness), and Gaia (Earth). Gaia gave birth to Uranus (Sky) and then married him. Their union created the original 12 giants known as the Titans:

Uranus and Gaia were also the parents of other races who were also giants: the Cyclopes, the giants with one eye, and the hundred-handed Hecatonchires.

Along with his brothers, Coeus, Hyperion, and Crius, Iapetus was tasked with guarding the four enormous pillars that held the sky aloft. The westernmost pillar was Iapetus’s responsibility. Since the Sky was their father and the Earth, their mother, it seems odd that they should strive to keep the two separated.

The Children of Iapetus and Clymene 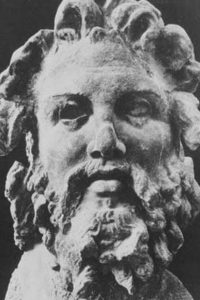 Iapetus married the sea nymph Clymene, the daughter of his Oceanus. Their sons are the majority of Iapetus’s legacy. It’s suggested that he passed on some of his worst character traits to his sons, and by extension, the new race of mankind.

Prometheus is likely the most popular of the sons of Iapetus. He stole fire from the gods and gave it to humanity, for which Zeus severely punished him. Clever and sly, he was often seen as untrustworthy.

Epimetheus was said to be as stupid as his brother was clever. Lacking foresight, he gave all good protective traits to the animals, leaving nothing for humans.

Atlas eventually took his father’s place as bearer of the heavens. Strength and endurance are his most prominent features, but he is also gullible and impetuous.

Menoetius is the least well-known, though he figures prominently in the story of the Titanomachy. The character trait he displayed most often was violence.

Iapetus and Clymene also had another son, Bouphagos, a hero of Arcadia. They also had one daughter, Ankhiale, the goddess of the warmth of fire.

The Titanomachy and the Downfall of Iapetus

Uranus was the supreme deity of the world when the Titans, Cyclopes, and Hecatonchires were born. Upon seeing the horror of the Cyclopes and the Hecatonchires, Uranus imprisoned these races in the yawning dungeon abyss called Tartarus. The Titans, being more attractive than the other races, were spared this fate. They were likely perceived as less of a threat to Uranus’s rule.

Gaia was offended that her children were imprisoned. Considering that Tartarus was located deep within the Earth, this also caused her great physical pain. She convinced the Titans to rise against Uranus and overthrow him. However, only Cronos was willing to wield a weapon against their father.

Iapetus, Hyperion, Crius, and Coeus did play a vital role in this coup since they were positioned at the four corners of the Earth. When Uranus descended from the heavens to mate with Gaia, the four brothers ambushed him and held him down by his arms and legs. Cronus castrated him with an adamantine sickle given to him by Gaia. He fled back into the cosmos, defeated.

Cronos ascended his father’s throne, and he ruled with a heavy hand. Fearing a prophecy that his children would overthrow him as well, he ate them as soon as they were born. His wife, Rhea, smuggled the infant Zeus away, tricking her husband into swallowing a stone instead.

Some sources say that Iapetus was viewed as an equal to Cronos or a significant ally. Likely, Cronos’s vicious nature appealed to Iapetus. How he reacted to Cronos’s madness of eating his children is unknown. However, when Zeus reappeared and saved his siblings from their gastric fate, Iapetus did not hesitate to side with his brother when the battle lines were drawn.

Thus, the great War of the Titans began. Most of the Titans fought alongside Cronos. Two of Iapetus’s sons, Prometheus and Epimetheus, fought on the side of Zeus and the new Olympian gods. His son Atlas was the leader of the Titan army, and Iapetus was one of the generals. No complete text exists that details the battle, but some fragments of text mention that Iapetus was a fierce warrior, and he lived up to his name as “piercer.”

The conflict raged for 10 years, with neither side gaining the upper hand. Iapetus fought in hand-to-hand combat with Zeus himself and was at last defeated. Some sources suggest that this was the pivotal turning point in the battle, for it was then that Zeus proved he was worthy to rule Olympus.

The war itself ended when Zeus released the Cyclopes and Hecatonchires from Tartarus. The Cyclopes fashioned powerful weapons for the gods, including Zeus’s lightning bolt. The Hecatonchires used their many hands to hurl boulders and mountains at the Titans. With this extra force, the Olympian gods were finally able to overcome the Titans.

After they won the war, Zeus condemned the majority of the Titans to suffer forever in Tartarus. Iapetus was included in this fate; Homer describes him standing in the abyss alongside Cronos.

As for Iapetus’s sons, Menoetius was struck by a lightning bolt from Zeus. Some sources say he was killed, while others say the lightning bolt carried him into Tartarus. For his role as leader of the Titan army, Atlas received a significant punishment. He was forced to hold the sky aloft for eternity, a task once performed by Iapetus and three of his brothers.

Prometheus and Epimetheus were not punished that day since they fought on the side of the Olympians. Zeus tasked them with populating the world with men and beasts, so they are viewed as the progenitors of mankind. They went on to cause havoc and adventures of their own, and they played roles in many of the popular myths.

The result of the Titanomachy marks the end of Iapetus’s direct role in Greek mythology. While many sources report that his imprisonment lasted eternally, others suggest that Zeus eventually relented and released the Titans from Tartarus. 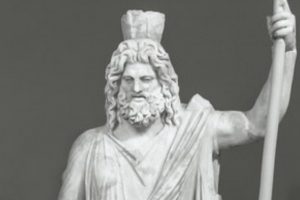 Not much is recorded about Iapetus, and the arc of his personal story ends just as the Olympian gods begin their adventures. Here’s a list of the things we do know about him:

Though his place in Greek mythical history is obscure, Iapetus is an essential character in the rise of the Olympian gods and the formation of mankind.