Mnemosyne: The Personification of Memory and Reason 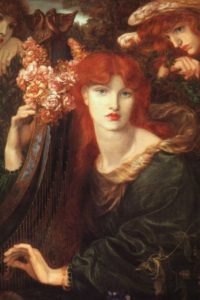 Grocery shoppers who get home with everything they meant to buy can thank Mnemosyne, Titan of memory. Like many of the first-generation Titans, Mnemosyne plays only minor roles in the actual myths. However, her name was invoked by poets, historians, and lawyers who relied on the oral tradition. Homer, Hesiod, and Plato included this Titan of memory in their written works as well.

In ancient times, all civilizations passed down every type of information by word of mouth. Even after writing was developed and became widely used, societies still relied heavily on the oral tradition to pass information to those who could not read.

Specifically, all types of Greek education centered around rote memorization. Lawyers, historians, philosophers, and poets alike recited the works of great writers aloud from memory. Before any recitation, it was tradition to invoke Mnemosyne and ask for her aid. With good recall, the educated Greeks could support their rhetoric and speak with authority.

We know that the stories from Greek mythology were passed down orally for hundreds of years before they were written down. Even the best bards did not recall every story the same way during each telling. Firstly, many of the stories were quite long. For example, the Iliad alone is over fifteen thousand lines long. Further, the stories were embellished for different audiences. This accounts for the inconsistencies and confusion in some of the recognized myths. Still, a bard in ancient Greece wouldn’t dare to begin a tale without first calling on Mnemosyne.

Who Is Mnemosyne in Greek Mythology?

Mnemosyne’s name comes from the Greek word mneme, meaning memory or remembrance. Usually, she is known simply as the Greek goddess of Memory, but this moniker has layers of meaning. She was believed to be the personification of perfect recollection. While this included rote facts, such as mathematical equations, historical facts, and lists (like your grocery list), it dealt more with remembering the ways of life and the laws of the universe.

The ability to remember is vitally linked with the power of reason and persuasive rhetoric, as well as the primary usage of language itself. Ultimately, any sort of speech and writing was associated with Mnemosyne.

Though she has no specific symbols or affiliated animals or plants, Mnemosyne is associated with Mount Pieria, which was said to be her home. She was personified as a river in the Underworld, serving as a counterpart to Lethe, the river of forgetfulness. Some sources say that when the dead reached the Underworld, they were told to drink from either of the two rivers as they chose.

Those that drank from the river Lethe wiped away the anguish of their lives. However, they also forgot all they learned, so they were reincarnated to learn their lessons again. If a person drank from the river Mnemosyne, they would remember all that came before, which would release them from the cycle of death and rebirth.

Like several of her Titan siblings, Mnemosyne was considered a goddess of time; she could “remember” the future as easily as the past. This ability associated her with oracles, specifically those at the sanctuary of Trophonios in Boeotia.

There, initiates were instructed to drink from two pools that bore the same names as the rivers of the Underworld. First, they would drink the waters of Lethe to forget their lives before they came to the sanctuary. Then, they would drink from the pool of Mnemosyne to remember the mysteries of the universe that the oracle would share with them.

Inside many of the temples to other gods, there often stood a shrine to Mnemosyne as well. She was also a revered figure in the cult of Asclepius, where supplicants prayed for the ability to remember any visions they may experience while at the temple.

Mnemosyne’s Family and History: the Titanomachy 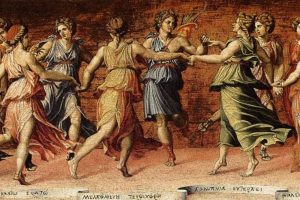 The story of Mnemosyne, like many of her siblings, involves few actual myths. However, the history of the Titans serves as the formation of all the well-known legends of the Olympian gods.

Mnemosyne and her 11 siblings were the children of the primordial gods Uranos and Gaia. According to tradition, the Titans rose up against their father, and Mnemosyne’s brother Cronus castrated him with an adamantine sickle. Cronus assumed his father’s throne, but he also proved to be a tyrant. Worried that his children would also rise up against him, he swallowed them shortly after their birth. His wife, Rhea, saved their sixth child, Zeus, from this gastric fate. As an adult, he returned to free his siblings from Cronus’ stomach.

The 10-year battle that followed was called the Titanomachy, which ended Cronus’ rule and began the age of the Olympian gods. Some sources report that Mnemosyne and her sisters took no part in the battle and sheltered in the palace of their brother Oceanus, who also remained neutral. While most of the male Titans were punished in the dungeon abyss called Tartarus, the female Titans were spared.

Mnemosyne and Zeus: The Birth of the Nine Muses

The primary myth for which Mnemosyne is remembered concerns the birth of her famous children, the nine Muses, patrons of the arts and sciences. Unlike the rest of her Titan brothers and sisters, Mnemosyne never took a spouse or a consort. However, she was just one of the many titans, goddesses, nymphs, humans, and other creatures which caught the lustful eye of Zeus.

Some sources speculate that Zeus had an additional motive for seducing Mnemosyne. Since he had recently defeated the Titans and assumed the throne of Olympus, he wanted his great victory and the glory of his rule to be remembered forever.

Disguising himself as a shepherd, Zeus went to Mount Pieria and seduced Mnemosyne. They lay together for nine consecutive nights, and then Zeus returned to Olympus. In the course of time, Mnemosyne bore nine daughters, each on successive days. They entertained at all of the banquets on Olympus, praising their father’s greatness in song and story in each of their unique ways:

Though the Muses seemed to take over Mnemosyne’s role, inspiring writers of all types, the writers often invoked her alongside her daughters.

Two Modern Words That Remind Us of Mnemosyne

Though Mnemosyne’s full name is seldom recognized today, two words exist in modern culture which preserve her in the collective memory. A mnemonic device is a teaching tool that helps people recall certain concepts. For example, “Every Good Boy Does Fine” helps a musician remember the order of notes on the treble clef in written music. “ROYGBIV” is a mnemonic device that aids in placing the order of colors in the rainbow.

Social media brought about the popularity of the word meme. A meme is an idea, behavior, or style made popular and easily recognizable through imitation. This is thought to be a cross between the two Greek words mimema (to imitate) and mneme (to remember). Arguably, one cannot imitate something if one does not remember it well. 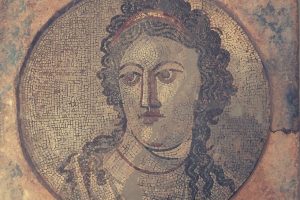 Though most of the Titans faded from memory after the Titanomachy, Mnemosyne remained influential throughout the various eras of Ancient Greece. Here are a few reminders of why she is still well-known:

While Mnemosyne had few dedicated cults, it can be argued that she was the most frequently invoked goddess in Greek Mythology. She was a part of the daily lives of the ancient Greeks, and she is likely to remain in the collective psyche as long as man needs memory.