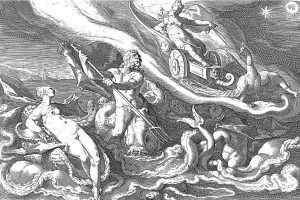 Oceanus Titan god of the sea, existed long before Poseidon. During the great war between the new Olympian gods and the Titans, he remained neutral, so he wasn’t punished with imprisonment. Still, Poseidon’s ascendancy as the god of the sea pushed Oceanus out of the spotlight. With his quiet nature, semi-retirement probably suited him well.

Who Is Oceanus in Greek Mythology?

Before Zeus and the other Olympians were born, Oceanus personified the river that surrounded the world. This river also served as a barrier between the land of the living and the realm of the dead. Some scholars infer that the Greeks might have considered the Atlantic Ocean to be this world river since it seemed that the Atlantic Ocean was at the edges of the Earth. Of course, any epithets that made the Earth seem flat were purely metaphorical. The Greeks were well aware that the Earth was round.

Instead of the Titan of the sea, a better epithet for Oceanus is the Titan of water. The Greeks believed that Oceanus’ vast world river was freshwater rather than saltwater, and the protogenoi god Pontus governed the salty seas. When Oceanus married Tethys, the goddess of freshwater springs, the couple represented all sources of freshwater upon the earth.

Oceanus had a loose connection to celestial bodies. The Greeks observed the movement of stars across the sky from east to west, and they created the story that the stars swam back to the east through Oceanus’s waters.

Oceanus appeared much like a merman, with a fish’s tail from the waist down. He wore horns shaped like a bull’s horns or the claws of a crab. Though he sometimes held an oar, usually, he is depicted with a fish in one hand and a snake in the other.

– Oceanus and His Family: Large in Size and Quantity

A family reunion for Oceanus would need more than a large event venue; it would require an entire continent. His parents, Uranus (Sky) and Gaea (Earth) brought three races of giants into being.

First were the three Cyclopes, named Arges (Brightness), Steropes (Lightning), and Brontes (Thunder). Despite having only one eye, these three were skilled craftsmen who later made magical weapons for Zeus and Hades. They were also much more intelligent and civilized than the Cyclopes that Homer described. Polyphemus, who appeared in the Odyssey, was dimwitted and somewhat violent.

The next children of Uranus and Gaia were the three Hecatonchires. Cottus (Furious), Briareus (Vigorous), and Gyges (Enormous) were immense giants with fifty heads and one hundred hands. With their size and agility, they were expert fighters, and they personified the raw power of nature. Artists throughout the centuries have attempted to depict the Hecatonchires in many different ways, with varying degrees of success.

Uranus was not pleased with either of these two races, and he imprisoned them in Tartarus, effectively returning them to Gaea’s womb. Their third race of giants was the Titans, and they were smaller and much more attractive. Uranus didn’t send them to Tartarus, so he must have been pleased, or at least not intimidated, by these children.

Oceanus was the eldest of the 12 Titans. Some sources suggest they were six sets of twins. Like most primordial gods, they usually personified an aspect of the universe instead of merely being in charge of it. Here is a list of the six sets of twins and their attributes:

– Oceanus and Tethys: The Large Family Gets Even Larger 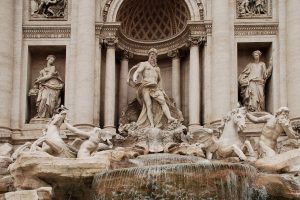 In time, Tethys became the wife of Oceanus. The Greek poets explained the innumerable sources of fresh water on the earth by gracing Oceanus and Tethys with a staggering number of children. Their male children were the Potamoi, and they personified the large rivers and lakes. Alternately, the Oceanids were the female children who represented ponds, streams, and brooks.

According to several sources, there were 3,000 Potamoi and 3,000 Oceanids. Often, the Greeks used “3,000” to represent a number too large to count, like the modern idiom “I’ve told you 20 times…” Therefore, the exact number may be unknown, but so is the number of freshwater sources.

With so many children, Oceanus and Tethys naturally served as grandparents to even more deities. The Potamoi all had children, collectively called the Naiads, who assisted their fathers in protecting the rivers. Several Oceanids bore children that often figured prominently in Greek myth, such as Prometheus, Epimetheus, Atlas, Achilles, and the Pleiades.

– Oceanus and His Neutrality in the Betrayal of Uranus

Uranus was a tyrannical ruler, and the Titans disapproved of his treatment of the Cyclopes and the Hecatonchires. Gaia gathered the Titans and asked them to overthrow their father. They agreed that dethroning Oceanus refused to take part in the betrayal. One can assume he was too busy fathering children with Tethys. He was a lover, not a fighter.

In the end, Cronus volunteered to attack his father, and the brothers that served as the Four Pillars of Heaven volunteered to assist. When Uranus came down to lie with Gaea, Coeus, Crius, Iapetus, and Hyperion ambushed him, holding each of his limbs. Cronus castrated his father with an adamantine sickle and threw his testicles into the sea. In disgrace and pain, Uranus retreated into the cosmos.

– Oceanus, the Golden Age, and an Alternate Myth

Cronus assumed the throne of Uranus on Mount Othrys. With Oceanus and his other siblings as close advisors, he ruled over an era of peace and prosperity known as the Golden Age. However, Cronus became obsessed with a prophecy that said his children would betray him and usurp his throne. In his madness, he swallowed five of his children whole soon after their birth.

Hestia, Demeter, Hera, Hades, and Poseidon suffered this gastric torture. Rhea saved her sixth child, Zeus, by giving birth in secret and tricking Cronus into swallowing a stone instead.

An obscure fragment of The Iliad discusses an alternative version of this story that includes Oceanus. Homer implies that Hera, too, escaped being eaten by Cronus. While Zeus grew to manhood on Crete, Hera was hidden away and raised by Oceanus and Tethys. This fragment relates that Tethys even served as Hera’s wet nurse:

For I am faring to visit the limits of the all-nurturing earth,

And Oceanus, from whom the gods are sprung,

And mother Tethys, even them that lovingly nursed

And cherished me in their halls,

When they had taken me from Rhea,

What time Zeus, whose voice is borne afar,

Thrust Cronos down to dwell beneath Earth

And the unresting sea.

Although this passage exists in such a famous work, most scholars confirm that Hera joined her siblings in Cronus’ stomach.

When Zeus was grown, he returned in disguise and slipped an emetic into Cronus’s wine. Cronus became violently ill and vomited up Zeus’s siblings, full-grown. The six siblings went to Mount Olympus to plan the War of the Titans or the Titanomachy.

Most of the Titans and their children fought for Cronus; a few sided with Zeus and the new Olympians. Once again, Oceanus refused to take part in the battle on either side. Since his palace was far from the fighting, he offered refuge to the female Titans and Olympians who didn’t fight in the battle. Hera likely sheltered there as well, which might have led to Homer’s confusing poem fragment.

There is no complete manuscript detailing the ten-year war of the Titanomachy. However, enough fragments exist to confirm that Oceanus remained neutral for the entire battle. In the tenth year, Zeus released the Cyclopes and the Hecatonchires, and their contributions eventually led to the end of the war. Zeus condemned the male Titans who sided with Cronus to suffer in the abyss of Tartarus. Since they took no part in the battle, Oceanus and the female Titans did not receive punishment.

When the new Olympians drew lots to divide the world, Poseidon became ruler of the sea. However, since Oceanus remained neutral, he kept his domain in the river surrounding the earth while Poseidon governed the Mediterranean sea. 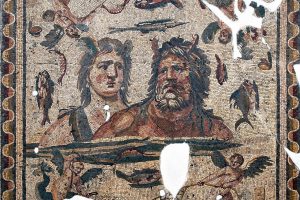 Oceanus is a unique figure in Greek mythology. He didn’t commit adultery, and he wasn’t hungry for battle or power. Here are some quick facts about him:

By all accounts, Oceanus seemed kind, level-headed, and peaceful. In a pantheon that contained lustful Zeus, jealous Hera, hot-headed Ares, and other fallible gods, Oceanus was a refreshing addition to the list.