Phobos: God of Fear and Trembling 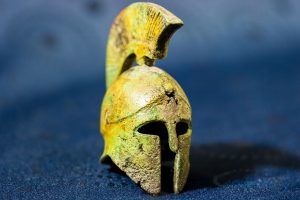 Everyone can associate Phobos, god of fear, with any uneasiness they might feel about particular objects or situations. While the Greek god Phobos is usually labeled generally as the god of fear, his role is more specific, and he requires the help of his twin brother to encompass the whole concept of fear.

Phobos was one of the lesser gods of the Olympian pantheon. Like many of his Titan predecessors, Phobos embodied a concept rather than playing many active roles in myth. Sometimes, these personifications were called daimones, or spirits. This word is the origin of the English word demons, which is rather appropriate in the context of Phobos and especially his twin brother, Deimos.

Deimos and Phobos together were the complete personification of fear, each representing different but equally crippling facets of this complex emotion. Deimos embodied terror, dread, and hopelessness, while Phobos symbolized panic, agitation, and the overwhelming desire to flee. For example, a deer who freezes in a car’s headlights would be seized by Deimos. The same deer leaping away with his white tail held high shows the influence of Phobos.

Phobos and Deimos always accompanied their father, Aries, into battle. Their purpose was not to inspire greatness and heroic deeds in the warriors that worshipped them. Instead, they were invoked to confound the enemy and bring him to confusion, disorder, panic, and disgraceful retreat. Though Deimos and Phobos were minor deities, the Greeks felt that these two alone could defeat an entire army.

The twins drove their father’s chariot, which was drawn by four gold-bridled, fire-breathing stallions named Aithon (Fire), Phlogios (Flame), Konabos (Tumult), and Phobos (Fear). It is interesting that one of the stallions bears the same name as the young god; this emphasizes the importance of fear as a battle tactic.

Whereas Deimos was hardly ever mentioned alone, Phobos was often invoked independently of his brother. Warriors frequently made sacrifices specifically to Phobos before battles.

How Was Phobos Born?

Phobos’ father was Aries, god of war, who thrived on bloodshed and violence. His mother, however, was Aphrodite, the goddess of love and beauty. This seems like a most unusual union, but it was reportedly one of Greek mythology’s most famous and most successful love affairs.

Both love and war engender intense and often irrational emotions. It is no wonder, then that the children of Ares and Aphrodite were living embodiments of several of the strongest emotions known to humankind:

Ares is the parent most associated with Phobos and Deimos, since fear and trembling are potent weapons in the art of warfare. However, Aphrodite’s province of love also contains a healthy amount of fear, even the kind for which Phobos is famed. People often contemplate illogical acts when fearing the loss or lack of love, either through death or the end of a romance. Phobos’ type of fear extends to the avoidance of relationships altogether for fear of rejection or abandonment.

What Is Phobos Known For? 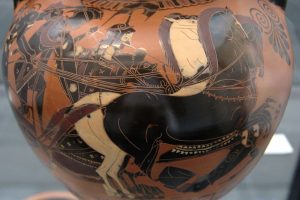 Predictably, most people know of the existence of the god Phobos through the use of the psychological word phobia. Normal fears are based on legitimate dangers and can often save one’s life. For example, sharks are dangerous under certain conditions, so a certain amount of anxiety may be healthy when encountering one.

Irrational fears, or phobias, occur when a person experiences alarm or even crippling anxiety about something that is not likely to cause harm, such as socks or asparagus. Alternately, these fears can involve real dangers but unlikely situations, such as feeling anxious about sharks while one is nowhere near water. A person with a phobia will often feel tense at the mere mention of an object or situation.

Phobos and his brother Deimos also lend their names to the two moons of the planet Mars, named by the American astronomer Asaph Hall in 1877.  Mars bears the Roman name of their father, Ares. Naming the moons for these famous brothers evoked the image of the twins accompanying their father once again into battle.  Phobos is the larger of the two moons.

Phobos doesn’t carry a specific symbol but is associated with weapons and armor due to his prominent presence on the battlefield. His image was often included on the shields of warriors to invoke fear and trembling in the enemy. The poet Nonnus alludes that Phobos is sometimes associated with lightning, while his brother Deimos is connected to thunder.

The twins are portrayed as nondescript young men or buff, bloodthirsty warriors. The only physical characteristics mentioned are Phobos’ mane-like hair, eyes of flame, and a row of bared teeth.

Phobos is sometimes associated with the lowercase greek letter phi; this is the astronomical symbol for the moon that bears his name.

Is Phobos Mentioned by Poets or Historians?

Shields provided a type of psychological warfare among Greek armies, and they often painted images of Phobos on their shields to inspire fear in their enemies during battle. Agamemnon and Achilles both fought in the Trojan War using shields bearing the images of Phobos and Deimos. The most well-known reference to this practice was penned by the Greek poet Hesiod, who describes the shield of Heracles:

In his hands he took his shield, all glittering:

No one ever broke it with a blow or crushed it.

And a wonder it was to see…

In the centre was Phobos, worked in adamant,

With eyes that glowed with fire.

His mouth was full of teeth in a white row,

-Hesiod, The Shield of Heracles

Phobos and his brother play another role in The Shield of Heracles. In one passage, Ares is injured during the skirmish, and his charioteers Phobos and Deimos rescue him and remove him from the field of battle.

In the Dionysiaca, Nonnus declares that Zeus gave the boys gifts to aid their task of instilling fear during his war with Typhon.

His own grandsons, Phobos and Deimos his servant,

The inseparable guardsmen of the sky:

Phobos he set up with the lightning,

Deimos he made strong with the thunderbolt, terrifying Typhon.

Nike lifted her shield and held it before Zeus:

Enyo countered with a shout, and Ares made a din.

In the poem Seven Against Thebes, Aeschylus declares that the seven warriors offered a gruesome sacrifice before the battle. They slaughtered a bull over a black shield, letting the blood and entrails flow down over the shield’s surface. Then they dragged their hands through the muck and held them aloft. They swore an oath to Aries, Enyo, and Phobos that if they did not conquer Thebes that day, their own blood would be the next to stain the ground.

In Ancient Greece, the city-state of Sparta was considered particularly aggressive and structured, and they saw fear as an essential component of a functioning society. Plutarch indicates that Sparta was the location of Phobos’ only active shrine. Going against the norms accepted elsewhere in Greece, the Spartans dedicated three noteworthy shrines: one to Phobos, one to Thanatos, the god of death, and one to Gelos, the god of laughter. This unusual trio signified that the Spartans had no fear of dying themselves, and they laughed when fear granted them victory over their enemies.

Plutarch also mentions that Alexander the Great made sacrifices to Phobos on the eve of the Battle of Gaugamela.  Alexander’s rival, Darius III, did flee the field of battle, so it seemed that Alexander’s prayers were answered. 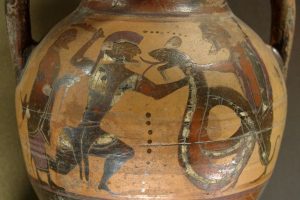 The Greeks named deities to represent every facet of life: physical, mental, and emotional. Often the minor gods played such insignificant roles that they disappeared into obscurity. Phobos, however, was not one of those characters. Here’s what we know about him:

Despite his minor role in Greek mythology, Phobos will continue to be remembered by humankind because of the primal emotions evoked by his name.