Prometheus: The Quick-Thinking Advocate of Humankind 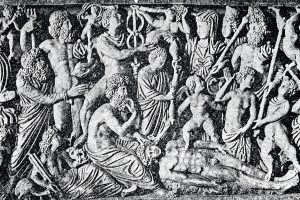 Though Prometheus titan and trickster, is known as the Titan who gave fire to humans, there is much more to know about this fascinating character. To the Greeks, Prometheus was the “benefactor of man,” responsible for humankind’s creation and continued ability to flourish. They held him in high esteem due to his many gifts to man and his advocacy before the Olympian council.

Who Is Prometheus in Greek Mythology?

Most people think that Prometheus is the Greek Titan of fire, but that isn’t strictly accurate. Hephaestus was always the god of fire, and Prometheus merely stole this element as a gift for the people he created. While he will always be closely associated with fire, Prometheus is actually the god of quick thinking and crafty solutions, and he is credited with the creation of humankind.

Prometheus was a trickster god, but he used his powers for good. Hesiod described the Titan Prometheus as a wise Titan whose cunning schemes helped humankind more than any other gods in the Greek pantheon. Athenians actively worshipped him throughout the age of the Olympians.

Some scholars suggest that the myth of Prometheus is akin to the story of Jesus. Both figures had a great love and empathy for humankind and suffered greatly (and willingly) because of their efforts to better the human condition.

Prometheus’ Beginnings: The Early Titans and the Titanomachy

Iapetus was the Titan god of mortality and the personification of the western Pillar of the Sky. He married his niece, Clymene, and they had four sons: Atlas, Prometheus, Epimetheus, and Menoetius. They grew up during the Golden Age of the Titans, in which Cronus ruled.

Cronus drove himself insane obsessing over a prophecy that his children would overthrow him like he did his own father. To avoid this fate, he ate his first five children. His wife, Rhea, hid on the island of Crete to bear their sixth child, Zeus. When she appeared before Cronus, she gave him a stone wrapped in swaddling clothes, and he ate that instead.

Once Zeus reached adulthood, he returned to Olympus in disguise and slipped an emetic into Cronus’ wine. Suddenly, Cronus became violently ill, and he vomited up Zeus ’five siblings, who appeared full grown. Together, they prepared to battle Cronus for the crown.

Prometheus and Epimetheus sided with Zeus and the Olympians, while Atlas and Menoetius chose to fight alongside their father. After ten fierce years of fighting, the Olympians prevailed. During one of the final battles, Zeus struck Menoetius with a lightning bolt; the force of the blow carried him into Tartarus. While most of the male Titans were imprisoned in Tartarus, Atlas was tasked with taking over for the Four Pillars, holding the sky aloft for all eternity.

Prometheus and Epimetheus: The Creators of Humankind

Since Prometheus and Epimetheus had proved their loyalty during the war, Zeus entrusted them with the task of populating the new world with men and beasts. The brothers used clay to fashion all sorts of interesting creatures, and Zeus breathed life into them. Then, the other gods joined in the project and gave them an assortment of characteristics and attributes they could use to make their creatures even more unique.

Unfortunately, Epimetheus lived up to his name. He blithely doled out the attributes without estimating how many types of animals there would be. When Prometheus arrived with his best work, called Man, the box of characteristics was empty. He told Zeus what his brother had done, but Zeus would grant no more attributes. Zeus was afraid that the humans would become greater than the gods themselves.

Prometheus was quite irked at his brother, for he was proud of his new creations and sympathetic to their needs. Secretly, he snuck into the private rooms of the gods. He found wisdom and reason in Athena’s workshop, so he stole them and gave them to his new humans. He took creativity and artistic ability from Apollo, and from Hephaestus, he purloined the tools humans would need to survive.

Some sources report that this was also the first time Prometheus stole fire for the people. It helped to keep them warm, since they had no fur like other beasts. However, they did not understand the art of fire, so they had to be careful to keep it going.

Prometheus vs. Zeus: The Sacrifice at Mecone 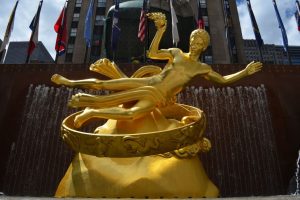 Knowing that Zeus would be angry because of this theft, Prometheus thought of a way to redirect Zeus’ attention. He taught his young humans how to make sacrifices to the gods. By praising them with offerings, the humans might be able to gain favor with the gods or avoid their punishment.

Prometheus showed the people how to sacrifice a fine bull and carve it, separating the parts into two piles. Prometheus hid the best cuts of meat inside the intestines and hide in one pile, while the other pile held the bones and lesser cuts. By adding the fattier pieces of meat on top, Prometheus made the second pile more attractive.

Sources argue over whether or not Zeus saw through Prometheus’ deception. Nevertheless, he chose the pile with the bones and fat. Ever after, sacrifices to the gods only contained the second-best cuts of meat.

Whether or not Zeus chose the lesser sacrifice on purpose, the fact that he was given such a choice at all angered him, and the anger grew. Soon, in a fit of pique, he went down to humankind and took away their fire. Without it, the poor hairless ones would freeze or suffer attacks by wild animals.

Prometheus determined that humankind would not suffer due to his misdeeds. He crept into Hephaestus’ workshop once again and stole an ember in a fennel stalk. Taking it back to the people, he showed them how to make fire and how it was useful for much more than heat. Once they knew the art of fire, Zeus could never take it away from them again.

Zeus was enraged. At his word, Hephaestus chained Prometheus to a rock, far away in the Caucasus mountains. Every day as he lay helpless, a giant eagle appeared, ripping at his torso and pecking out his liver. At night, his liver regenerated in time for the cycle to start again at dawn the next day.

The liver was considered the seat of emotion and empathy, so with this punishment, Zeus symbolically tore away Prometheus’s feelings for his beloved humans. However, the liver grow back each night, so Zeus failed to achieve his goal.

Pandora’s Box and the Punishment of Humankind

Before Zeus punished Prometheus, he took his revenge on the humans who loved Prometheus. On Zeus’s order, Hephaestus fashioned the first woman out of clay and sent her to be Epimetheus’s wife on Zeus’s order. Prometheus warned his brother to be wary of this gift, but he did not listen.

Pandora was given a jar as a wedding gift but was told never to open it. One day, her curiosity won. All types of evil spilled forth from the jar and escaped into the world, plaguing humankind with disease, crime, and other ills. When she got the lid back on the jar, everything had escaped except hope.

Hercules and the Salvation of Prometheus

After Prometheus’s punishment continued for many years, Zeus did visit him. He offered Prometheus his freedom in exchange for information about the prophecy in which Zeus might lose his throne. Prometheus refused, and so his excruciating punishment went on.

Hercules and Prometheus met while Hercules was performing his famous Twelve Labors. As he passed through the Caucasus, he heard Prometheus’ screams of pain. Hercules had a habit of going against his father’s wishes, and he killed the eagle and broke the Titan’s chains.

As expected, Zeus was angry at first, but Hercules was his favorite son and usually got away with such misdeeds. Zeus relented with one caveat: Prometheus must take one of the links from his chains and fashion it into a ring. Wearing it would serve as a daily reminder not to cross Zeus again.

Prometheus even agreed to tell Zeus the details about that bothersome prophecy. Luckily, the prophecy said that “the son of Thetis would become more powerful than his father.” Zeus did indeed want Thetis as a consort, but upon hearing this, he ceased his pursuit. This may be the one time in Zeus’s history that his brain overpowered his libido.

Prometheus in Literature and on Screen

The legend of Prometheus is recorded in several texts. Specifically, it is partially referenced in two of Hesiod’s works: Theogony and Works and Days. Theogony is the earliest recorded work about Prometheus, dating to the 8th Century BCE.

Prometheus makes appearances in several modern fictional works. One significant example occurs in the television show Supernatural, in which Artemis and Prometheus appear. In their version of the story, Prometheus was driven insane by his torturous punishment, and Zeus commissioned Artemis to hunt Prometheus and kill him. Despite the appeal of this idea, this storyline is not a part of classic Greek myth. 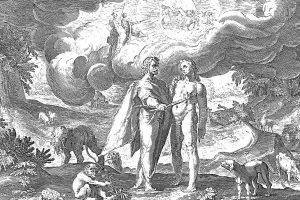 Prometheus was a trickster god who used his cleverness to help humanity, even though he sometimes made Zeus and the other gods look foolish. Here are the essential facts.

Despite all of his advocacy and good deeds, one could argue that Prometheus was the catalyst for many of the woes faced by humankind. Without his interference, they would not have suffered Zeus’s punishments. However, without his gifts, humans might not have survived. At least his heart was in the right place… or rather, his liver.