Rhea: Mother of the Olympian Gods 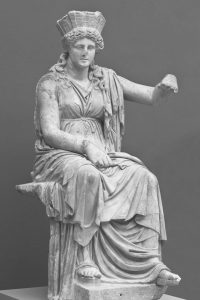 Rhea, Titan goddess of fertility and motherhood, may have played only a supporting role in the famous stories of Greek mythology. Still, the classic Greek pantheon wouldn’t even exist without her. Of all the goddesses that carry the moniker, Rhea is indeed Mother of the Gods.

Rhea’s place in myth exists primarily in the pre-history of Olympian rule and with the epic formative story known as the Titanomachy. Once Rhea’s children were in power, she was present at many significant Olympus events.

Who Is Rhea in Greek Mythology?

Rhea was the first-generation Titan goddess of fertility and motherhood. Etymologists infer that the name “Rhea” is pre-Greek or Minoan in origin, though they disagree on its meaning. The word is thought to derive from seed words meaning earth, flow, ease, and occasionally, pomegranate. Ultimately, Rhea is associated with these attributes, but flow and ease are the most prevalent.

Flow is associated with fertility and motherhood, describing menstrual blood, birth waters, and mother’s milk. Ease in the Greek language is rhea. The works of Homer often use the phrase “the gods who live at their ease.” While this phrase suggests a leisurely life, it also notes that Rhea is responsible for it.

Though most of the goddesses in Greek mythology possess eternal youth and beauty, Rhea was portrayed as an older, more matronly figure. She wore a high crown, sometimes called a turret crown, that was said to resemble the walls of a city. As Queen of the Gods during the Golden Age, she carried a royal scepter, and she possessed a grand palace on the peak of Mount Dindymon in Phrygia.

Like many of the other goddesses, the moon served as one of her symbols. She was also associated with the planet Saturn, and she lent her name to one of Saturn’s moons. Swans and lions were the animals most associated with Rhea. In various artworks, she rode a lion or in a chariot pulled by two lions. Of plants, she preferred the fir tree. Because of the story of the birth of Zeus, she is often depicted carrying a wrapped stone.

Rhea was associated with several of the mother goddesses in the Mediterranean and Near East. Often, she was used interchangeably with the goddess Cybele in Anatolia and sometimes with her own mother, Gaia. She was also revered as Meter Theon (Mother of the Gods) in Attica, Arcadia, Corinth, and other cities in Asia Minor. In Rome, she was identified as Magna Mater (the Great Mother) and the goddess Ops. Some have noted that Rhea is also an acronym for Hera, Zeus’s wife and Queen of the Olympian gods.

She had a significant cult in Crete, the island where she fled to give birth to Zeus. Rhythmic chanting and percussion were thought to be regular features of her worship. 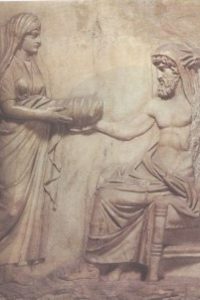 Rhea’s most significant contribution to myth takes place during the Titanomachy, the War of the Titans. To understand this story, one must explore the earliest Greek legends concerning the creation of the world.

In the beginning, Chaos reigned. Chaos created the primordial gods, such as Nyx (Night), Erebus (Darkness), and Gaia (Earth). Gaia gave birth to Uranus (Sky) and then mated with him, producing the first 12 mighty giants known as the Titans. There were six males and six females, and some sources say they were six sets of twins, one set being Cronos and Rhea. Uranus also sired other giant races, the Cyclopes and the Hecatonchires.

Uranus ruled with an iron hand. He imprisoned the Cyclopes and the Hecatonchires in the abyss of Tartarus. Sometimes it is recorded that he was offended by the horror of those two races, but more likely, he was apprehensive of their size and strength, fearing they could overthrow him. Most sources agree that the Titans, being smaller and more attractive, escaped this fate. Unfortunately for Uranus, this proved to be a mistake.

Gaia was aggrieved and offended at the treatment of her children. Also, their imprisonment in Tartarus caused her pain since Tartarus was located deep within the earth. She convinced the Titans to rise against their father, but only Cronos would wield a weapon against him.

Four of the brothers held Uranus while Cronos castrated him with an adamantine sickle given to him by Gaia. Defeated, Uranus fled back into the cosmos, and Cronos threw Uranus’s testicles into the sea. The blood that fell on the oceans created other creatures such as the Furies, the Erinyes, and the Meliae. His genitals caused the sea to foam, and from that foam, the goddess Aphrodite was born.

Rhea and the other female Titans took no active part in the overthrow of their father, but they did support the coup.

Cronos and Rhea: Mother and Father of the Olympians

After Cronos assumed his father’s throne on Mount Othrys, he married his twin sister, Rhea. Together they ruled the cosmos in the era known as the Golden Age. They had six children:

However, the children of Rhea did not have an easy beginning in the world. Cronos knew of a prophecy warning him that he would be overthrown by his sons, just like he defeated his own father. He became obsessed with the idea. To escape this fate, he had a unique solution. When Rhea brought forth a child into the world, he swallowed it.

Rhea watched, helpless, as he swallowed five of their children right after their birth. When she became pregnant for the sixth time, she hid on the island of Crete, where she gave birth to Zeus. Instead of presenting Zeus to his father to be devoured, she handed Cronos a stone wrapped in swaddling clothes, and he ate it instead. In time, this stone was called the Omphalos Stone. Some sources suggest that the stone was given to her by her mother, Gaia.

Rhea kept her son Zeus hidden on Crete in the Dictean cave on Mount Ida to keep him safe. He was raised by the goat-nymph Amalthea and protected by militant giants called the Kouretes. They kept Cronos unaware of the infant’s existence by banging their shields together, concealing the baby’s cries. Rhea could not visit her son on the island, lest she rouses Cronos’s suspicions.

Rhea’s Revenge and the Dawn of the Olympian Gods

Thanks to Rhea, Zeus grew up in safety. When it was time, Rhea went to her son on Crete and conspired to rescue his siblings, trapped in their father’s stomach. Zeus and Rhea returned to Mount Othrys, and Zeus disguised himself as Cronos’s cupbearer. He slipped an emetic into Cronos’s wine. Some sources report that it was mustard that was added to the drink. When Cronos consumed the wine, it made him violently ill, and he vomited up his five children, who had all grown to adulthood within his stomach. With Rhea’s guidance, her six children fought with Cronus and all the Titans who supported him.

The fierce War of the Titans lasted for 10 years. Each side seemed unbeatable, and the earth suffered greatly during the battles. It wasn’t until Zeus released the Cyclopes and Hecatonchires that the Olympians gained an advantage. With their help, the Olympians finally conquered the Titans.

After the defeat, Zeus took Cronos’s adamantine sickle and cut his father into a thousand pieces, throwing him into the abyss of Tartarus. All the Titans that opposed Zeus were imprisoned in Tartarus, except for Atlas. He was doomed to bear the sky on his shoulders for eternity. A few Titans, such as Prometheus and Epimetheus, were spared this fate. They went on to assist in the creation of mankind.

As the mother of the Olympians and instigator of the great war, Rhea was given a special place on Mount Olympus. She advised her children on how to divide the world to keep tensions between the siblings at bay. Although she is seldom mentioned after the end of the Titanomachy, Rhea was present at the great feasts of the gods and the birth of Apollo. It is said that she was the one who convinced Demeter to return to Olympus after the abduction of her daughter, Persephone. 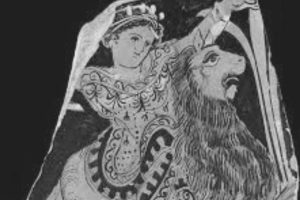 Rhea was a first-generation Titan and the Queen of the Gods during the Golden Age. Her contributions to the ancient stories were few but profound.

Though she is involved in only a limited number of myths, Rhea was essential to the rise of the Olympians. In a way, she could be considered the mother of Greek mythology.