Tethys: Spirit of Water and Mother of Thousands 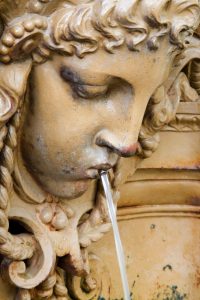 Tethys, Titan of flowing water, is one of the more obscure first-generation Titans in Greek mythology. She didn’t play much of an active role in many myths, but she is remembered for her impressive number of children.

Who Is Tethys in Greek Mythology?

Tethys was the daughter of Uranus and Gaia. Like the rest of the first-generation Titans, she represents a concept more than an actual object or location. She is often misconstrued as the Titan goddess of the oceans, but actually, she is the personification of all fresh, flowing waters. Water held the power of life, death, and renewal. It was her responsibility to ensure that this divine element moved and flowed freely about the world.

Tethys’s name is likely related to the Ancient Greek tethē, meaning grandmother. This would align with her copious fertility and her famous grandchildren. Tethē is also similar to another Indo-European word meaning to suck or to suckle. Some sources suggest that this is related to an obscure alternate myth about Tethys serving as nursemaid to Hera. Both definitions seem to adequately fit Tethys’s maternal nature.

She is seldom mentioned in Greek literature, and those mentions are usually references to her children or grandchildren. Still, those infrequent appearances in myth support her nurturing, motherly attributes. This is not surprising since water is such a vital foundation of life.

Like several other Titans, Tethys gave her name to one of the moons that orbit Saturn. In an interesting coincidence, modern scientists have discovered that the moon Tethys is composed only of water and ice.

Like many of the first-generation Titans, not much is known about the story of Tethys.

In the beginning, there was only Chaos. From Chaos came the first primordial deities, such as Gaia (Earth), Erebus (Darkness), and Nyx (Night). Gaia gave birth to Uranus (Sky). Their marital union created the original twelve giants known as the Titans. Some sources report that these siblings were actually six sets of twins:

Uranus and Gaia were also the parents of other races of giants. Most easily recognized were the one-eyed Cyclops, who were master artisans. Less well-known were the Hecatonchires, who had 50 heads and one hundred hands each. This made them mighty fighters.

Oceanus and Tethys: Siblings and Lovers

The twins Oceanus and Tethys were well suited to each other. While Tethys was the personification of fresh waters, Oceanus represented Okeanos, the oceans that surrounded the entire Earth.

Together, they had an incredible number of children. Most notable of these were the 3,000 female Oceanids, nymphs of the oceans. Usually, this number is understood as a metaphor, indicating that the number was too high to count.

Several of the Oceanids made favorable matches with other first- or second-generation Titans and bore children that figured more prominently in Greek myth. These fortunate unions made Tethys the grandmother of many prominent gods and heroes, such as Athena, Prometheus, Epimetheus, Atlas, Achilles, and the Pleiades.

In addition to the Oceanids, Oceanus and Tethys also served as parents to the 3,000 male river spirits called the Potamoi. These rivers included the Nile and the fabled Styx, among others. The Potamoi were also the fathers of the Naiads, freshwater nymphs who would assist their fathers in protecting the rivers and streams.

Despite their parents remaining neutral in warfare, the Potamoi were known for being hotheaded warriors. They sided with the Giants when they rebelled against Zeus, and they picked fights with heroes such as Achilles and Heracles.

The Titanomachy: Foundations of the Conflict

Tethys played no active role in the events before or during the Titanomachy. Still, she was indirectly involved simply because of her Titan blood.

Uranus was a jealous, tyrannical ruler. He imprisoned the Cyclopes and the Hecatonchires in the abyss of Tartarus, deep within the Earth. Sources suggest he was offended by their ugliness, or more likely, apprehensive of their great strength. The Titans, being a smaller, more attractive race, escaped this fate. However, it was eventually the Titans that rose up against him.

Gaia was upset at the treatment of her children, and their imprisonment in Tartarus caused her physical pain. She gathered the Titans and convinced Titans to rise up against their father. They agreed, but only Cronus was willing to wield a weapon against him.

The Titan brothers that served as the Four Pillars of Heaven volunteered to assist Cronus. Coeus, Crius, Iapetus, and Hyperion ambushed him and pinned each of his limbs at the corners of the earth. Cronus took an adamantine sickle and castrated his father, flinging his testicles into the sea. In disgrace and pain, Uranus fled back into the cosmos.

The Titanomachy: The Rise and Fall of the Golden Age

Cronus assumed his father’s throne and ruled over what was known as the Golden Age. However, he eventually proved to be a tyrant as well. Cronus became obsessed with a prophecy that said Cronus’s children would rise up to defeat him as he had deposed his own father. In his madness, he decided to eat his children as soon as they were born.

Hestia, Demeter, Hera, Hades, and Poseidon were swallowed whole just after their birth. Rhea saved her sixth child, Zeus, by tricking Cronus into eating a stone instead.

At this point in the tale, an alternative myth about Tethys comes into play. An obscure fragment of The Iliad suggests that Hera, too, was spared this intestinal torture. While Zeus grew to manhood on the Island of Crete, Hera was hidden in the castle of Oceanus, Tethys’s husband. This fragment relates that Tethys served as Hera’s wet nurse while she was an infant:

“For I am faring to visit the limits of the all-nurturing earth,

And Oceanus, from whom the gods are sprung,

And mother Tethys, even them that lovingly nursed

And cherished me in their halls,

When they had taken me from Rhea,

What time Zeus, whose voice is borne afar,

Thrust Cronos down to dwell beneath Earth

And the unresting sea.”

Despite this passage in such a famous work, it is still generally accepted that Hera was one of Cronus’s culinary victims.

The Titanomachy: Victory to the New Olympians

When Zeus was grown, he returned and disguised himself as Cronus’s cupbearer. He slipped an emetic into Cronus’s wine, which caused Cronus to vomit up Zeus’s siblings, full-grown. These were the first six Olympian gods, and they did indeed rise up against their father.

At this point, war was inevitable. While most of the Titans and their children fought for Cronus, a few sided with Zeus and the new Olympians. Tethys and most of the female Titans took no active part in the battle. In fact, Tethys and Oceanus offered refuge to the female Titans while the conflict raged. Likely, Hera sheltered there as well, which might have led to the confusing poem fragment.

The battle raged for 10 years, and eventually, the Olympians were triumphant. Those male Titans who sided with Cronus were condemned to suffer in the abyss of Tartarus. Since they took no part in the battle, the female Titans were spared.

After the conclusion of the war, Tethys and several of the other Titans faded into obscurity. Only one later myth mentions Tethys in passing, and it again involves her relationship with Hera.

Zeus seduced the nymph Callisto and impregnated her. The jealous Hera turned Callisto into a bear, and Artemis hunted and killed her. Zeus set the bear in the sky, becoming the constellation Ursa Major.

Tethys was sympathetic to Hera’s insult. She decreed that no part of the constellation could set into the waters as other constellations do. This is the origin story of why Ursa Major is located at the celestial pole and remains in the visible sky in the northern hemisphere. 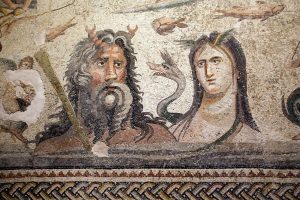 The Greeks tended to name a deity for almost all elements, locations, and concepts, even if the god rarely came into play. Here’s what we learned about the minor goddess Tethys.

Though her persona has passed into insignificance in modern society, Tethys lingered in the memories of the Ancient Greeks. Her children and grandchildren cemented her place in Greek Mythology.