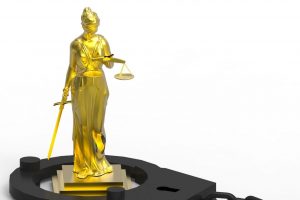 Themis, Titan goddess of justice, is one of the few first-generation Titans who is still recognized in today’s world. Every day in American courts and judicial facilities worldwide, people pass her image, known in modern times as Lady Justice. As a Titan, her direct contributions to Greek mythology were limited. However, as the personification of the natural and moral law, she will continue to play an essential role in all civilizations and societies.

Who Is Themis in Greek Mythology?

Instead of ruling a particular element or region, the first-generation Titans often personified abstract concepts. Though Themis’ position is shorthanded as ‘Titan of justice,” the meaning behind her role is more complex and nuanced.

Themis’ name derives from the Greek word tithemi, meaning custom or tradition, or appropriately, that which is established. Themis was considered the ultimate authority on “natural law,” which embodied the divine order of the universe. This included the laws of physics as well as what the gods considered a proper action for all of humankind. Violating those laws was deemed to be offensive to the gods themselves.

Known as “the people’s goddess,” Themis also promoted the fabric of a fair and ordered society by the adherence to an established set of rules for living, what one might call “moral law.”  These rules were seen as vital to preserving civilized culture.

Themis passed judgment not only during life but also after death. When a soul arrived in the Underworld, she provided the final decision as to whether a soul would live in the heavenly bliss of the Elysian Fields or suffer in the hellish abyss of Tartarus. Three sons of Zeus assisted her with these judgments: Aeacus, Rhadamanthys, and Minos.

On Olympus, Themis was well respected. The gods depended on her to help separate fact from fiction and give wise lawful advice. This earned her the nickname, “Lady of Good Counsel.” She was also responsible for calling the gods to assemble on Mount Olympus when Zeus issued decrees.

Like her mother Gaea, Themis had the gift of prophecy and therefore was associated with oracles. It was believed that Gaea bequeathed the oracular temple of Delphi to Themis. Later, she passed control of Delphi to Apollo. Even after Apollo became the primary god associated with Delphi, Themis was still worshipped there.

The classic image of Themis aligns with her portrayal in most courthouses. She is dressed in a classical Greek chiton, holding the Scales of Justice, which represent the balance of society and weigh the deeds of men. Her sword cuts fact from fiction and pierces to the heart of an issue. She is also associated with a lion and is said to carry a cornucopia, but these images rarely appear in popular art.

One discrepancy exists in her popular portrayal; Themis never wore a blindfold. Some sources allude that the blindfold appeared as her roman equivalent, Justitia, became popular. Others indicate that 16th Century artists added the blindfold. The concept that “justice is blind” does align with Themis’ principles of fairness and impartiality, but a blindfold might have impeded her ability to “see” the truth.

Themis in the Golden Age and the Titanomachy 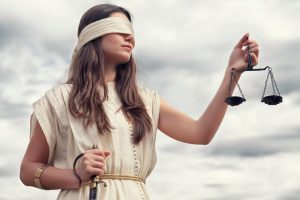 The story of Themis starts just after Creation, like the rest of the first-generation Titans. However, she continued to be an active player on Olympus longer than most of her brothers and sisters. Still, the Greek myths related to Themis are few.

In the beginning, there was only Chaos. From Chaos came the first primordial gods, such as Nyx (Night), Erebus (Darkness), and Gaia (Earth). Gaia gave birth to Uranus (Sky). They married, and their union created the original 12 giants known as the Titans:

Uranus and Gaia were also the parents of other races who were also giants: the Cyclopes, the giants with one eye, and the hundred-handed Hecatonchires.

Intimidated by their size or ugliness, Uranus imprisoned the Cyclopes and the Hecatonchires in the abyss of Tartarus, deep within the Earth. However, it was the Titans that rose up against him. Coeus, Iapetus, Crius, and Hyperion held their father down at the four corners of the Earth while Cronus castrated him with an adamantine sickle.

Cronus assumed his father’s throne and ruled over what was known as the Golden Age. However, he proved to be a tyrant as well. Cronus was driven mad by the thought of his own children betraying him, so he ate his first five children just after their birth. Rhea saved their sixth child, Zeus, by tricking Cronus into swallowing a stone instead. When Zeus was grown, he returned and caused Cronus to vomit up his siblings, full-grown. These were the first six Olympian gods, and they did indeed rise up against their father.

Battle lines were drawn. While most of the Titans and their children fought for Cronus, a few sided with Zeus and the new Olympians. Themis sided with Zeus, likely because Cronus violated natural law by eating his children.  Some sources report that Themis used her oracular powers to see that Zeus would be victorious in the battle, and she advised her nephews, Prometheus and Epimetheus, to side with the Olympians.

The battle raged for 10 years, and eventually, the Olympians were triumphant. Those male Titans who sided with Cronus were condemned to suffer in the abyss of Tartarus. Since they took no part in the battle, the female Titans were spared. A few, like Themis and Rhea, assimilated into the new order and were given places of prominence on Mount Olympus.

Zeus and Themis: A Natural Match

Though Zeus had countless consorts, he also had three actual wives: Metis, Themis, and Hera. Of the three, Themis seemed to best complement Zeus’ own role as patron of law. She would inform him when someone had broken the natural order, and he would see that justice was carried out. She also advised him against his own rash actions to ensure that he didn’t violate natural law himself.

At one point, Zeus was inclined to marry Thetis, one of Themis’ Titan sisters. Using her oracular powers, Themis saw that Thetis’ sons were destined to defeat their father. Zeus was understandably reluctant to have a child uprising in the family for a third generation, so he changed his plans about marrying Thetis.

Sources suggest that both Themis and Zeus were responsible for planning the Trojan War. They schemed to end the Age of Heroes and relieve an Earth whose resources were strained from overpopulation.

Together, Zeus and Themis had several children:

The Fates, also called the Moirai, were the entities that followed human lives from birth to death. Clotho would spin the thread of a person’s life, Lachesis would measure how long the thread should be, and Atropos would cut it with her shears.

The Horae (the Hours) maintained the stability of society. Dike was the perfect combination of her parents’ attributes. She personified justice and actively participated in carrying it out as well. Eunomia guided the governance of humanity through the creation of human laws. Eirene represented the concept of peace achieved through adhering to natural law.

Dike and her sisters were actually the second generation of sisters known as the Horae. Thallo, Auxo, and Carpo were the first triad to bear that name, and they managed the proper cycles of the seasons. A few sources record Themis as the mother of this trio as well, but they are most often recognized as the children of Zeus and Aphrodite.

Though the jealous Hera succeeded Themis as Zeus’ third wife, there was no strife between the two goddesses. Indeed, Themis offered Hera consolation (and a stiff drink) after she and Zeus had come to blows arguing over the Trojan War. Hera was grateful for Themis’ comfort and understanding. After all, who would understand the trials of being Zeus’ wife better than Themis? 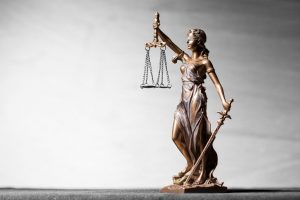 Themis’ famous persona as Lady Justice is a powerful symbol of western legal systems. Still, she is much more than the subject of courthouse décor.

As long as humans embrace the ideas of fairness, morality, and truth, Themis will remain a relevant image in continuing civilizations.