Uranus: The Titan and Greek God of the Sky, Heavens, and Air 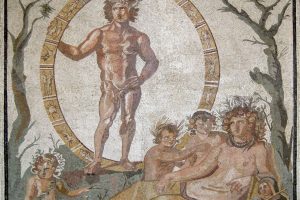 Uranus, titan of the first generation, was the primordial Greek god of the heavens, the sky, and the air. He was there at the beginning of time. His mother, Gaia, had him as her first child, and they ruled the world together. Read this to find out how his reign abruptly ended because of his overthrow by his disloyal son, Cronus.

Who Is Uranus in Greek Mythology?

Uranus the Titan was the god of the heavens at the beginning of time. He was the first child of Gaia, the mother goddess, also known as Mother Earth. Together, they created and ruled over the world, and built a firm and strong Titan partnership. He fathered many, but it was the most famous son of Uranus, Cronus, who overthrew him in the end.

Uranus was less like an actual being and more like a “mythological creature” to the Greeks at the time. He was not so much understood as a god but rather a presence or a force. He was most assuredly male, and he personified the rough destruction of maleness. He was in charge of the heavens, but he was also one with them.

He was the male half of the partnership while Gaia was the female half. He was usually known to be a cruel and unloving father, and his power could not be defied. All life stemmed from him and Gaia. However, his life was ended as well as his reign when Cronus took the power into his own hands.

The Etymology of Uranus, Great God of the Heavens

Uranus, synonymous with the planet which bears its name, means “sky” or “heavens.” It came from the Greek word, “worsanós.” It might also have come from the Indo-European word “uers-,” which means “to rain or to make wet.”

Family of Uranus, From Whom All Life Stemmed

Even though she was his mother, Gaia and Uranus also lay together to create the rest of the world. He would return each day to be with her. Uranus’ children included:

He was also the grandfather of the famed Olympian gods. These included the goddess Hera, Demeter, Zeus, Hestia, Poseidon, and Hades. However, the father of Uranus didn’t seem to have existed.

Myths of Uranus, the Great God in the Beginning

Uranus, since he was more like a force rather than a physical being, had few myths to his name. But because of the fact that he was the “father” of almost all Greek life, he had his hand in many things. He was the one who began a cycle of one overthrow after another.

– The Origin of Uranus, the Beginning of It All 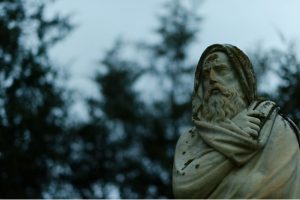 The poet Hesiod outlined Uranus’ beginning in his famous poem “Theogony,” around the 8th century BC. The poem spoke of many myths and aspects of Greek culture and life. Uranus was Gaia’s first child, and she became a mother goddess and Mother Earth after that. Together, they bonded and were the parents of all Greek deities and creatures.

But he was not a good father, and Gaia knew it. He was cruel, violent, and unkind, and he had a great fear that his children would eventually overthrow him. When they first began to have children, he got so afraid that he sent some of his children to Tartarus, a sort of hell deep within the mortal realm. Gaia was furious with him, and she feared for her children.

She created a sickle and told her children that they should be brave enough to castrate their father and take over his throne. Out of all her many children, Cronus was the one who decided that he would be the one to do the deed.

– Uranus’ Overthrow and Demise: Cronus as a Jealous Son

In some stories, Gaia was the one who urged her children to take over their father’s power. But in other tales, Cronus was desperate to gain power for himself. He didn’t want his father to be in control of the universe any longer, and so he took it from him. He castrated his father, and he tossed Uranus’ genitals into the sea.

From that action, all kinds of creatures emerged, including the beautiful goddess of love and sex, Aphrodite. She was born from the blood and semen from his genitals as well as the sea foam, and she emerged fully grown out of the sea. Once Cronus’ seat was firmly placed, he freed his siblings, but he kept the monster’s siblings in Tartarus. Little did he know that he too would come to the same end as his father.

– The Castration of Uranus: Where Did the Sickle Go?

There was a lot of debate about where that famed and bloody sickle ended up after Cronus used it to achieve his end. One poet named Callimachus stated that it was buried in Zancle, in Sicily. However, a Greek traveler named Pausanias believed that the sickle was thrown into the sea at the cape near Bolina, an ancient city in Greece.

– The Primordial Titan God and Other Deities

There is a similarity between the Greek Uranus and the Hurrian God Anu. The Hurrians were a people that existed during the Bronze Age, and their location was Anatolia, Syria, and Northern Mesopotamia. Anu was also a god of the sky, and he experienced a similar fate. His son Kumarbis bit off his father’s genitals, and after that, he was able to spit out three gods.

Uranus still has a legacy living on today through the name of the seventh planet from the sun. This planet was discovered in 1781 by William Herschel. Its first name was to be “George’s Star” because of King George III, who was in power at the time. The name was changed to Uranus in the 19th century.

It made sense that another Greek god was selected to be a part of the planets. All the other gods are there too, except their Roman names were chosen. The planet Uranus kept its Greek name, and the god’s Roman counterpart is Caelus. 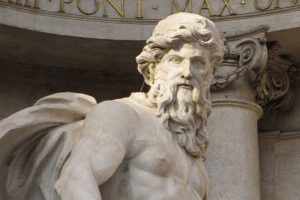 Take a look at the main points about Uranus covered in the article above:

Uranus was there at the beginning of Greek time along with his mother as they bore the rest of the deified world. From them sprung all godly life, and because of them, all mythology began. However, he had a bad beginning, and he had a bad end at the hands of his own child. It started a deadly cycle, but many would say that this powerful Titan got what he deserved in the end.