Ame No Uzum: The Uninhibited Shinto Goddess of the Dawn 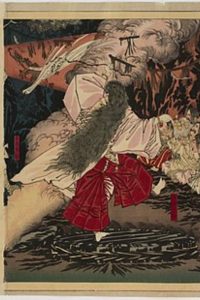 The bawdy comedic performances of the Shinto goddess Ame No Uzume seem more at home in a late 1960’s variety show, like Laugh-In or Benny Hill. Indeed, many in modern society would consider her wanton comedy as an objectification of women.

Like all stories from centuries ago, one must consider the context in which it was written while acknowledging that such behavior is questionable. However, Ame-no-Uzume intentionally used her lewd humor to her advantage and also to save the world. Her bawdy antics represented not the objectification of women but a celebration of comedy and merriment.

Who Is Ame No Uzume in Japanese Mythology?

Ame-no-Uzume is one of the thousands of Shinto kami or nature spirits. Her antics during the myth of Amaterasu earned her the role of goddess of the dawn. According to this myth, she invented the art of performance, so she served as a patron of dancing, theatre, music, and other performing arts. She created kagura, a type of storytelling dance, and two types of comic theatre, kyogen, and noh.

Scholars translate Ame-no-Uzume to mean whirling heavenly woman, which is entirely appropriate for this goddess. Her full name is Ame-no-Uzume-no-Mikoto, often shortened to Uzume. Other epithets include Heavenly Alarming Female, The Great Persuader, and Shining Uzume.

Ame-no-Uzume represented many aspects of Japanese culture, but she originated far away from that small island nation. Like many of the kami, Uzume can trace her roots back to the Vedic traditions of India, specifically to the dawn goddess Ushas mentioned in the Rig Veda. Ushas also inspired other European goddesses of the dawn, such as Zorya in the Slavic zones, Eostre in the Teutonic regions, Eos in Greece, and Aurora in Rome.

Scholars say little about her specific physical appearance, but myths record that she certainly isn’t ashamed of her body. Stories relate that she wore loose or revealing clothing, which she intentionally removed for comic effect. Her customary smile displays her mirthful, clever nature.

Symbols connected to Uzume include the mirror because of how the ocean reflected the sun at dawn. The mirror also serves as a sacred symbol of the Imperial family. Because of her husband, she claims a connection to kitsune, a type of Japanese fox spirit.

The Worship of Ame-no-Uzume

Ame-no-Uzume and her husband, Sarutahiko, are prominent figures in the Shinto religion and regularly receive worship to the present day. Though they have shrines all over Japan, their main worship center is at the Tsubaki Grand Shrine in Mie.

Traditionally, Uzume is considered the founder and leader of the Sarume, a group of sacred Shinto dancers. The group was primarily women, and they honored the gods with comic dances called saru-mahi, or monkey dances. Often, they performed at the Festival of First Fruits and other Shinto festivals.

– The Story of Amaterasu: Ame-no-Uzume Saved the World 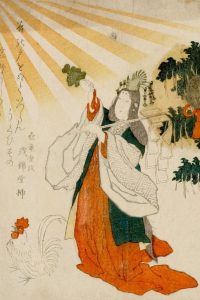 Amaterasu, the kami sun goddess, argued with her brother Susanoo, the god of the sea and storms. Apparently, Susanoo had quite a stormy temper, and he vandalized her rice fields and killed some of her maidens. Terrified and ashamed, Amaterasu fled into Amano-Iwatu, the Heavenly Cave, and refused to come out. When she disappeared into her rocky sanctuary, all light and warmth vanished from the world, endangering all in existence.

The 800 kami gathered around the mouth of the cave, begging Amaterasu to come out. However, no amount of persuasion could convince her to emerge. Finally, the young kami Ame-no-Uzume had an idea. She set a mirror in front of the cave mouth and placed a large, green jewel on the ground in front of it. She asked the other kami to laugh and shout merrily as if a grand celebration were happening. However, the result was not very realistic.

Thinking quickly, Uzume turned over a large washtub and stood on it, thumping with her heels until she had everyone’s attention – including Amaterasu’s. Then, she began to dance, performing the first burlesque show in existence. Her comical gyrations, lewd banter, and playful clothing removal made the other kami laugh heartily and clap their hands with glee.

Amaterasu called from her hiding place to ask what was happening. The onlookers answered back, “A new god has arrived, greater than you.” Curious, she poked her head out of the cave and saw the jewel. Was that for the new god’s coronation? Another step forward, and she was entranced by the brightness of this new deity, which was in actuality her own reflection.

Amaterasu stepped out of the cave to greet the new deity. Some of the other kami rushed forward and blocked the cave entrance, sealing it with an unbreakable shimenawa rope. This time, the kami persuaded Amaterasu to return to her place in the sky, and the earth escaped a dark, cold fate. Ame-no-Uzume gained the role of goddess of the dawn since she brought the light back to the world.

– Ame-no-Uzume and Sarutahiko: The Meeting on the Bridge

Ame-no-Uzume became a close friend and advisor to Amaterasu. Many years passed, and one day, Amaterasu called for Ninigi, the August Grandchild of Heaven. She told him to go to the earth and bring order and civilization to the earthly kami and also found the imperial line of Japan. Ninigi was strong and brave, but still, Amaterasu asked Uzume to go as well, as additional protection.

Ninigi and Uzume journeyed forth toward the earth and Japan. As they reached the Ame-no-Ukihashi, the Floating Bridge of Heaven, they were stopped by an alarming sight.  A fearsome dragon, fifty feet long, with a colossal snout and blazing eyes, blocked their entrance to the bridge. Despite his reported bravery, Ninigi sent Uzume ahead to confront the beast and subdue it with her looks.

Fearless as usual, Ame-no-Uzume stepped forward and captured the dragon’s attention. To greet the creature, Uzume laughed provocatively, slipped her garment off her shoulders, and bared herself to the waist. With her hands, she eased the waistband of her garment down even further, below her navel, and posed teasingly.

The dragon was surprised and confused, and likely amused as well. He asked, “Ame-no-Uzume, what in the world are you doing?”

“I would ask the same of you,” she replied seductively. “Who are you that dares to block the way of the great Ninigi, beloved grandson of Amaterasu herself?”

The dragon smiled and revealed his humanesque form. “I am Sarutahiko, the god of the crossroads. I didn’t come to block Ninigi but to greet him respectfully and serve as his guide.”

Uzume beckoned Ninigi forward to meet this helpful new friend, and they all continued the journey to the earth. One can assume Uzume readjusted her clothing before crossing the bridge.

After their provocative meeting, Uzume and Sarutahiko married. Their descendants were the noble family of the Sarume-no-Kimi clan. Within that clan was a group of female sacred dancers who performed in Shinto ceremonies across Japan.

– Ame-no-Uzume and Her Revenge on the Sea Slug

Uzume, Sarutahiko, and Ninigi reached Japan and subdued the unruly kami. As Ninigi set himself up as the first Emperor, Uzume went to the edge of the ocean. She gathered all the fish and other sea creatures and asked them if they would swear loyalty to Ninigi.

Her question was met with a chorus of agreement as all the creatures of the water praised the new Emperor. However, Uzume noticed that one animal didn’t join in; the sea slug remained mute. His silence was due to the fact that he didn’t have a mouth.

Uzume cried, “This mouth is a mouth that can’t answer!” Not wanting to make the poor creature feel embarrassed or isolated, she took a knife and cut a slit in its flesh. The little slug opened its new mouth and gave praise to Ninigi.

Some versions of this story suggest that Uzume slit the sea slug’s mouth in anger or that she damaged his existing mouth because it dishonored Ninigi. However, this doesn’t seem to align with Uzume’s coy, cheerful nature. For a woman who baffled a dragon by removing her clothing, acting out of spite wouldn’t be her first reaction. 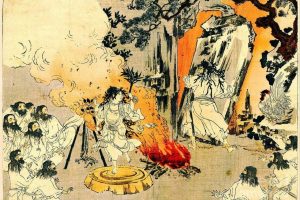 Ame-no-Uzume is still worshipped today as part of the Shinto religion, and she inspires performance artists and merrymakers all over Japan. Here are a few things to remember about this cheeky goddess:

Despite her now questionable antics, Ame-no-Uzume remains one of the favorite figures in Japanese mythology. The Great Persuader still encourages people to enjoy themselves and take life less seriously.