Bishamonten: The Stern but Generous Military God of Japan 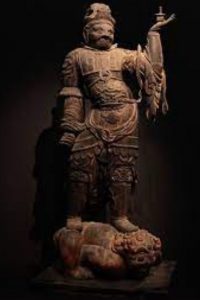 Bishamonten is famous in Japan and other Asian cultures, but is known by different names. This fact is not unusual in regional mythologies. For example, Roman mythology borrowed heavily from the well-established beliefs in Greece and surrounding areas. When adopted by Rome, the gods of Olympus received new names, but their stories and most of their attributes remained intact.

The same sort of deity-borrowing occurred in Asia. As Buddhism developed from its roots in Hinduism, many Hindu gods made the easy journey to the new religion and received new names. Bishamonten was one of those adopted gods, and he became one of the more important figures in Japanese mythology and Japanese society today.

Who Is Bishamonten in Japanese Mythology?

According to Buddhist tradition, Bishamonten served as the god of war and the patron of warriors, priests, healers, and other righteous persons. He enforced law and sought out evildoers and dangerous persons, and he embodied the virtues valued in the Japanese warrior class. He was also considered a god of wealth, but given his military nature, he specifically governed the spoils of war.

In artistic representations, Bishamonten wore full armor and a stern, protective countenance. He carried a spear and a miniature pagoda. The pagoda symbolizes the wealth that he protects and metes out as he sees fit. Though rarely shown in artwork, Bishamonten was said to ride a white horse, Ubaibitomru, who could travel 500 km with one step.

Bishamonten appeared by many names, and his origins stretch back to the pre-Buddhist eras in India. Likely, his earliest developed form was Kubera, the Hindu god of wealth and king of the Yakshas, a race of nature spirits. Legend says that he was once a wealthy farmer, and he earned his godhood when he took all the grain from one of his mills and gave it to the needy.

After this selfless act, he slowly became known as Vaiśravana, which means either “son of Vaiśrava” or “to hear distinctly.” He protected the northern quadrant of the world, including the land of Uttarakuru. When the Buddha appeared on the scene, Vaiśravana became one of his followers. He served as the messenger between the Buddha’s followers and the gods, and he protected the gardens where the Buddha preached.

As Vaiśravana, he was pictured as a short, portly man with a yellow face, carrying a royal parasol and a pomegranate. He often appeared in the company of a mongoose with jewels coming out of its mouth. The mongoose is the enemy of the snake, which in Buddhism represents greed and selfishness.

Over time, worship of this persona moved eastward, and each region and religious group adjusted the name and some of the attributes. When translated into Chinese, Vaiśravana became Pishamen, then Beishiramana. By the time this Buddhist deity reached Japan, he was called Tamonten, then Bishamonten; his protective, military qualities were recognized more than his connections to wealth.

The Four Heavenly Kings of Buddhism

Bishamonten served as part of two groups of gods integral to Buddhism and other religions and folklore of the Far East. The Shitennō, or the Four Heavenly Kings, were deities that guarded the four cardinal points of the world. They could command supernatural beings to help them protect the world from all kinds of evils. When considered part of the Four Heavenly Kings, these gods possess additional attributes that aren’t mentioned at other times.

Tamonten (Bishamonten) presided as the chief of the Four Kings and the guardian of the north. He was known as The One Who Hears All Things, and he protected the places of learning, specifically the gardens where Buddha preached. In addition to the warlike attributes we have discussed, he also commanded the rain. His colors were yellow and green.

Zochoten, the guardian of the south, was called The One Who Makes All Things Grow. He caused the winds to blow and helped the plants grow deep, healthy roots. He carried a sword and was associated with the color blue.

Jikokuten was The One Who Maintains All Things. From his seat in the east, he governed music, harmony, and compassion. His color was white, and he played a pipa, a Chinese four-stringed instrument like a mandolin.

Komokuten, sporting the color red, was the guardian of the west. He was The One Who Sees All Things, and he brought unbelievers and lapsed devotees back to the Buddha’s teachings.

The Shichi-Fukujin: The Seven Lucky Gods 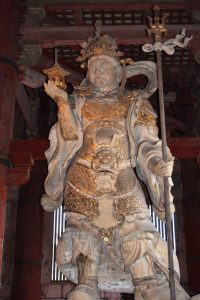 As prominent figures in Japanese folklore since at least the 15th Century CE, the Shichi-Fukujin are the Seven Lucky Gods, believed to grant good fortune and protection to their devotees. Depending on which god’s attributes best fit the role, they also served as the patron for specific classes or occupations. Even today, one can see statues and carvings of the Seven Lucky Gods all over Japan. Here’s a little information about each of the seven deities.

Bishamon Japanese God of Fortunate Warriors – Physically, he appears as expected, with Bishamonten spear and pagoda, wearing full armor. In this guise, he represents victory in any struggle and overcoming obstacles.

Fukurokuju, one God of Wisdom and Longevity – Originally a mortal Taoist sage, he became immortal and possessed the ability to raise the dead. In his carvings, he appears as a short man with an unusually large head, often with a crane or a stork at his side.

Jurojin, another God of Wisdom and Longevity – Like Fukurokuju, Jurojin was once a Taoist sage. He is depicted as an old, bearded man wearing a scholar’s cap, accompanied by a stag. He carries a long stick, on which is a scroll containing all the wisdom of the world.

Benten, Goddess of All That Flows – She is the only female in the Seven Lucky Gods, and she embodies the best parts of living, including literature and music. Often, she is considered the patron of geishas, dancers, writers, and other artists. She rides atop a dragon and plays a biwa, a type of lute or guitar.

Hotei, God of Thrift, Contentment, and Philanthropy – Known as the Laughing Buddha, he chuckles constantly, and he often surrounds himself with children. He appears as an unkempt monk with large earlobes and a rounded, exposed belly. He advocates that one can be happy without the meaningless trappings of wealthy life and that true contentment comes from sharing with others.

Daikoku, God of the Bountiful Harvest – He was the patron of farmers and those who worked in the kitchen. Dark-skinned and muscular, he also has a prominent belly and earlobes, like Hotei. He stands atop two bags of rice, carries a sack of treasures, and wields the Hammer of Riches, which can grant wishes.

Ebisu, God of Business and Prosperous Labor – This deity protected tradespeople and fishermen. Like Hotei, he is portly and sports long earlobes, but he usually wears an elaborate Japanese costume and headdress. He carries a fishing rod in his right hand, while in his left, he holds a freshly caught sea bass, which is a symbol of luck.

Bishamonten and the Seven Lucky Gods receive significant attention and reverence, even in modern times. Frequently, the Japanese people and tourists to the island purchase figurines of these deities as souvenirs or keepsakes. Many believe that rubbing the figures will bring good fortune.

Throughout Japan, there are shrines in most major cities dedicated to the Seven Lucky Gods. In the shrines as well, visitors rub the statues to bring themselves prosperity and luck. Bishamonten’s main shrine is the Chougosonshi-Ji Temple on Mt Shigi.

Every year between January 1-7, families often participate in the Shichi-Fukujin Meguri, a pilgrimage to the shrines of the Seven Lucky Gods. People used to perform the pilgrimage on foot, but now with the convenience of modern transportation, visitors can complete the tour of all seven shrines in much less time. In each city, the temples sell commemorative stamps and collector’s posters. Anyone who can collect all the stamps within the first week of January ensures prosperity and good fortune for the rest of the year.

– Takarabune: The Treasure Ship of the Seven Lucky Gods

Though Bishamon and the Seven Lucky Gods remain in the Japanese collective psyche throughout the year, New Year’s Eve is particularly momentous. On this night, folklore states that all seven deities climb aboard the Takarabune, the Treasure Ship. Similar to the legend of Santa Claus, the Seven Lucky Gods sail all around Japan and land in every port. They bestow magical gifts on anyone they encounter along the way.

The Takarabune is a single-masted ship with a dragon’s head at the prow. The large sail shows an image of a gold coin and the Japanese character for good luck. The takaramono or “treasure things” that the deities carry on board this ship would ensure lasting good fortune for the receiver, or at least an adventurous, exciting life. Traditionally, the gifts include:

On New Year’s Eve, children and adults place a picture under their pillow; the picture shows Bishamonten and the Seven Lucky Gods aboard the treasure ship. If the sleeping person dreams a fortunate dream that night, the year ahead will be full of joy. However, if someone has a bad dream, this person can set the picture adrift in a river. This action is said to wash away the year’s bad luck that was indicated in the dream.

– Bishamonten and the Paper Tigers of Mt. Shigi

The legend of Bishamonten’s first appearance began around the 6th Century CE. Prince Shotoku Taishi was a devotee of the developing Buddhism. Mononobe no Moriya, the clan chieftain of a high-ranking family, vehemently opposed the teachings of Buddhism. The two argued vigorously to no avail until there was no choice but to take up arms against each other.

Before the battle, Shotoku Taishi stood on Mt. Shigi and prayed to the gods of his new religion, There on the mountain, Bishamonten appeared and granted victory to the faithful prince. He made his presence known at the hour of the tiger, on the day of the tiger, in the year of the tiger.

To honor this gift of assistance, Prince Shotoku Taishi built the Chougosonshi-Ji Temple in 594 CE and dedicated it to Bishamonten. Thousands visit the temple annually, especially on New Year’s Day, as part of the pilgrimages for the Seven Lucky Gods.

Also, the temple holds a Tiger Festival every year to honor the arrival of Bishamonten. Priests and devotees surround the temple with paper-mâché tigers to celebrate the god’s auspicious appearance. 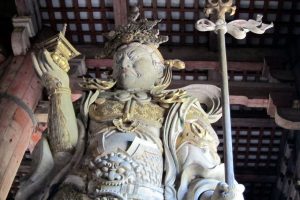 From his roots as a Hindu deity to the modern traditions honoring the Seven Lucky Gods, Bishamonten has enjoyed active worship and reverence for thousands of years. Here are a few facts to remember.

Bishamonten and the Seven Lucky Gods will continue to play a significant role in Japanese society for many generations to come.