Ebisu: The Merry, Generous, and Disabled God of Prosperity and Luck 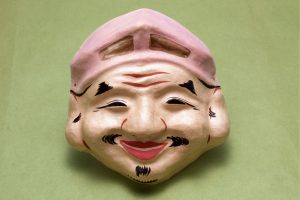 Ebisu is a unique character in Japanese mythology, indeed, in any mythology. Though there are other crippled or deformed gods, and more than one endured a troubled upbringing, only Ebisu understood how to be happy despite any shortcomings and find positives in any situation.

Who Is Ebisu in Japanese Mythology?

Ebisu is one of the few deities that actually originated in Japan. Most others can trace their roots back through Buddhist traditions in China and Tibet and sometimes back to Indian Hinduism.

He is the Japanese god of luck and prosperity, but so were many other gods. Ebisu’s particular niche was prosperity through honest labor and fair dealing. He served as patron to merchants, tradesperson, and especially fishermen. He is one of the Shichi-Fukujin, or Seven Lucky Gods, and the subset of that group, known as the Three Gods of Good Fortune.

From early on in his history, Ebisu displayed an affinity for the sea. He symbolizes safe travel upon the waves and bountiful fishing. In a way, he is the aquatic equivalent of Daikokuten, the god of agriculture and rice, and the two often appear together.

Ebisu most often appears as a portly, well-dressed man with a large hat. He holds a fishing rod in his right hand and a red sea bream or bass in his left. The fish itself is a symbol of luck and bounty. He is slightly crippled and partially deaf, but he is always smiling or laughing, sharing his wealth freely.

Besides the red bream, Ebisu associates with other sea creatures such as sharks and whales, especially jellyfish, due to the story of his childhood. He also governs the flotsam and jetsam that drifts in the sea, including driftwood, debris, and sometimes corpses.

Ebisu’s Legend: His Birth and Rise to Godhood

Though sources differ, Ebisu mythology usually records him as the eldest child of Izanagi and Izanami, the gods that created the islands of Japan. He was the first of a multitude of kami, elemental divinities that were sacred in the Shinto religion. Though he was the kami of luck and prosperity, his family life didn’t seem so lucky.

In this origin story, Ebisu is known as Hiruko, the Leech Child. When Izanagi and Izanami married, they didn’t follow the marriage ritual precisely. When they consummated their marriage, their firstborn kami was born without bones. The divine couple was dismayed by the child’s deformity, and when he was three years old, they put him in a reed boat and set him adrift on the sea. After they abandoned their abomination, they repeated their marriage ceremony correctly, and their subsequent children were born without defects.

Hiruko floated along the waves for a long time until he washed up on an unknown shore, where he encountered a group of Ainu, indigenous people of Japan. He was adopted and raised by a kindly Ainu man named Ebisu Saburo. Within a few years, he had grown a skeleton and learned to walk, and soon he transformed into the smiling, mirthful deity recognized across Japan. To honor his adopted parent, he took the name of Ebisu.

Though he remained slightly crippled and partially deaf, Ebisu was always in a merry mood. He always remembered the seas that kept him safe and brought him to a nurturing, generous people. Everywhere he went, he would share joy and luck with all he encountered, especially fishermen. 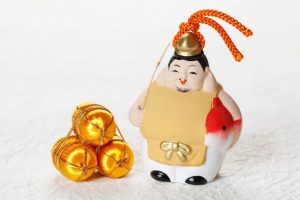 Ebisu is actively worshipped today throughout Japan, especially in Osaka and the Hyogo prefecture. Worshipping a deaf god gave rise to the practice of clapping one’s hands loudly or striking the walls of the sanctuary to get Ebisu’s attention before beginning worship.

During the Ebisu-ko Festival on January 9 to 11, tradition dictates that local shops and merchants give their customers special discounts. With Ebisu’s focus on fair dealing, the merchants use the bargains as a penance, in case they overcharged anyone during the previous year.

One beneficial aspect of Ebisu’s disability is that he is available for worship throughout the entire year. Kannazuki is the tenth month on the Japanese calendar, and it is known as “the month with no gods.” Except for Ebisu Shinto kami from all over Japan heeded the call to go to Izumo Province and gathered at the Izumo Shrine. Because of his deafness, Ebisu didn’t hear the call; he stayed in the cities and received all the worship usually given to the rest of the kami. He is the only god to have a feast day during October.

The Shichi-Fukujin: The Seven Lucky Gods

Frequently, the Japanese people and tourists purchase figurines of the Seven Lucky Gods as souvenirs or keepsakes. Many believe that rubbing the figurines will bring good fortune. January 1 to 7 is known as the Shichi-Fukujin Meguri, celebrated by a pilgrimage to all seven shrines. In each city, the temples sell commemorative stamps (goshuin) and collector’s books (goshuincho). Anyone who collects all seven stamps during the festival earns a year’s worth of good fortune and happiness.

New Year’s Eve is a propitious time for Ebisu and the Seven Lucky Gods. Legend tells that on this night, all seven deities climb aboard the Takarabune, the Treasure Ship. The Takarabune is a ship with a dragon’s head at the prow. Its large, single sail shows the Japanese symbol for good luck and an image of a gold coin.

The Seven Lucky Gods sail all around Japan and land in every port, giving away magical gifts to all who are fortunate enough to meet them. Customarily, these gifts include:

One favorite family ritual is for everyone to place a picture of the Seven Lucky Gods under their pillow on New Year’s Eve. If that evening’s dream is pleasant, the year ahead will be prosperous and plentiful. However, if someone has a bad dream, this person washes away the bad luck by dropping the picture in a river.

The Three Gods of Good Fortune: A Subset of the Shichi-Fukujin

Often, Ebisu appears with Daikoku, and together they represent a bountiful harvest by land and sea. When joined by Fukurokuju, the trio is called the Three Gods of Good Fortune. Not much is unique about this group since they retain the same attributes as when they are a part of the Shichi-Fukujin. Perhaps these three deities are simply the most revered of the seven, so they appear more often.

As such a recognized deity, Ebisu often appears at festivals and local events. The costumed impersonators help promote products at the events, but more often, they simply roam the festival, spreading joy and entertaining families and children.

Ebisu also lends his name to a few popular products. He appears on the logo for Yebisu beer, brewed by Sapporo. Also, his habit of dressing well inspired the designer clothing brand called Evisu. 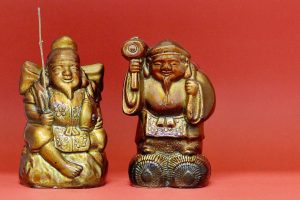 Despite his troubled infancy and continuing disabilities, Ebisu remains a favorite figure in Japanese culture, and he enjoys widespread fame and worship even today. Here are a few fun facts to remember about this merry and beloved Shinto deity:

Perhaps Ebisu is the embodiment of the descriptive phrase, “happy-go-lucky.” Though he suffered much in his younger years, his bright spirit and carefree nature remained strong. His story is a reminder to find the good in anything that happens and continue to think positively about the future that awaits.