Fukurokuju: One of the Seven Japanese Lucky Gods 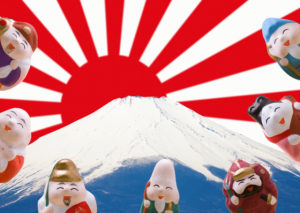 Fukurokuju (福禄寿) is one of the Seven Lucky Gods in Japanese Mythology, representing wisdom and longevity.

Despite being the most frequently set aside god, Fukurokuju has one ability separating him from the other Japanese lucky gods—he can resurrect the dead.

Who is Fukurokuju in Japanese Mythology?

In Japanese mythology, Fukurokuju is considered one of the seven lucky gods. It is widely believed that he is the Japanese interpretation or assimilation of the Chinese Fulushou, popularly known as the Three Star Gods.

It is not uncommon in Japanese mythology to have a distinct and intertwined Chinese origin. In some versions of the story, Fukurokuju was a hermit in his past life during the Song dynasty.

He is a god who can survive without eating and later reincarnated as Hsuan-wu, a Taoist god. The Seven Lucky Gods of Japanese mythology are a rich combination of various religious influences and origins. These include Hindu-Buddhist and Taoist-Buddhist interpretations, collectively presented with positive energy and as auspicious spirits.

Fukurokuju is portrayed as having a very elongated skull, almost having the same length as his body, with long silvery whiskers and a charming demeanor. You can also identify his assimilation of the Chinese gods based on his attire, which comprises traditional Chinese clothes. He holds a cane, and a scroll believed to contain the entire world’s writings and wisdom. Animals accompany him, which include a deer, crow, or turtle.

These animals are symbols of long life in Japan. The deer that accompanies him is usually black. The Japanese believe that black deers are known to be beyond 2000 years old.

Among the Seven Lucky Gods, two carry the status of being the Japanese God of Longevity. Besides Fukurokuju, the other one is Jurōjin, his cousin. In ancient illustrations, they look slightly similar, but you can identify who’s who based on what they are holding. Fukurokuju carries a cane and a scroll, while Jurōjin has a staff and a fan.

Interestingly, their relationship, which caused some confusion about their designations, is that many literary scriptures noted that they inhabit the same physical body. However, Fukurokuju carries a broader influence, being the god of wisdom, happiness, and wealth, aside from being another Japanese god of longevity.

Despite all of these incredible things surrounding Fukurokuju’s existence, he was almost always omitted from being one of the Japanese lucky gods, especially in the Seven Lucky Gods’ earlier representations. He is typically replaced by the goddess Kichijōten, an independent goddess of fertility, beauty, and happiness.

There are various reasons behind the omission, one being the confusion of his existence with that of his cousin, as they are occupants of a single physical body. The other is literary preference. Fortunately, he has now cemented himself as an established member.

Fukurokuju and the Role of the Seven Lucky Gods

In earlier Japanese literature and arts, the seven lucky gods are considered remote entities who do not meddle with mortal affairs. However, they have gradually attracted mortals endowed with specific capabilities based on their origins, which were observed and celebrated by various professions and followers.

Initially, it was somewhat confusing to designate who will be the patron of which trade. Still, modern-era literature has successfully made these distinctions, and designations have been made. Fukurokuju’s passion for chess led him to become the patron of chess players and enthusiasts. He believes that chess is the game for the wise and the thinker, and a man who thinks is the man who holds power.

Aside from being the god of chess players, Fukurokuju is also the god of watchmakers. He is the god of longevity—measured in terms of time. Aside from this, watchmaking is complex and highly intricate, thus requiring accuracy and wisdom.

Lastly, athletes also honor him for endurance and luck. Those who would like to receive his blessing rub his forehead for good luck and victory in competitions.

Aside from all these, scholars and researchers revere him—Fukurokuju is consistent in pursuing wisdom and a profound lifestyle. His demeanor and exceptional knowledge have captivated scholars and students in their journeys toward acquiring knowledge and achieving excellence in the careers they pursue.

Fun Fact: The Funny Man Among the Lucky Gods 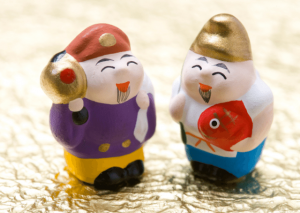 It is a well-known fact that Fukurokuju has been previously omitted in several important literary compendiums, including the Butsuzōzui compendium of 1783, where the goddess Kichijōten replaced him. Another fascinating aspect is that many artworks showcase how mild-mannered and funny Fukurokuju is.

Given his unique appearance, the other gods watch Fukurokuju writes calligraphy using a brush tied to his elongated head. He also requests the other gods to use a ladder to shave his head because they will not reach the top of it.

In general, the Seven Lucky Gods comprise a very nice collective of gods and a goddess. They exude universally positive energy, not to mention their influence surrounds life’s essential aspects: wisdom, longevity, and good heart.

As an exceptionally wise entity, Fukurokuju is a charming man. He is highly celebrated because of his beautiful mind and heart. He can be likened to a cool and wise grandfather who does not mind jokes and a good laugh. This makes him a very endearing god, just like the other members comprising the Seven Lucky Gods. While other gods in other mythologies associate wisdom with arrogance, Fukurokuju exudes kindness and gentleness.

Fukurokuju managed to establish himself and stand out among the Seven Lucky Gods of Japanese Mythology. His humble roots and intertwined history led him to become a widely celebrated god.

In modern times, Fukurokuju is celebrated during the Seven Lucky Gods pilgrimage in Japan. The Seven Lucky Gods are among the most celebrated collective god and goddess groups in Japanese mythology, given the significant number of blessings and guidance that each group member bestows. This pilgrimage occurs during the first seven days of the new year.

There are numerous pilgrimage routes. The most popular ones include the Miyako Seven Lucky Gods pilgrimage in Kyoto, considered the oldest, and the Yamanote Shichifukujin Meguri in Meguro, and Koedo Kawagoe Shichifukujin in Saitama–both near Tokyo.

This pilgrimage brings luck, wisdom, and prosperity to those who complete the process. The pilgrimage usually takes a few hours to one whole day, depending on the shrines’ distance.

Ultimately, Fukurokuju can remind us that humble and simple beginnings can lead to more extraordinary things in life. We need to apply the lessons we learn along the way as tools to prepare us for a better future.