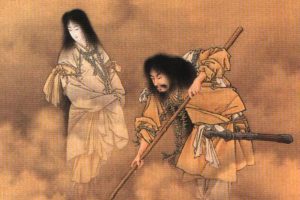 Izanagi or Izanagi-no-Mikoto is the creator god of the Japanese kami, or gods, in Japanese mythology. He and his wife, Izanami, created the Japanese islands. He is also in charge of Yomi, the Land of the Dead. Read on to find out he went to save his wife but ended up running away.

Who Is Izanagi in Japanese Mythology?

He also had other powers, and he carried around a spear called Ame-no-nuboko, which he would use to mix the seas. His other job is to protect the world from having more deaths than births. He keeps things balanced, and he keeps the powers of Yomi, the Land of the Dead, from getting too out of control. He was in charge of the Heavens himself, but after he birthed three powerful gods, he made them the leaders.

In Shinto Izanagi is an important part of the tradition, as his origin story comes from Shinto belief. He and his wife were the ones who helped to cause the creation of Japan. However, things went south after Izanami died. And perhaps, that’s where Izanagi’s story truly began.

Origin and Family of Izanagi

Even though he was a creator deity, he did have parents, and he and Izanami were not the first gods present in the heavens. They were seventh-generation children of earlier deities. They were actually brother and sister.

Izanagi and Izanami created the Japanese islands by dipping a spear into the sea. They churned it around, and it created the islands. These islands became something like their children, and their names were:

But after Izanami died and Izanagi went through a specific cleaning ritual, he birthed three more kami:

He was later considered the father of the Japanese Imperial Family.

The Mythology of Izanagi, Father of the Pantheon

Izanagi took part in many myths, and they were all full of excitement and strange occurrences. Not only that, but he was destined for sorrow in more ways than one. But the main Izanagi myth has to do with the tragic death of his wife. 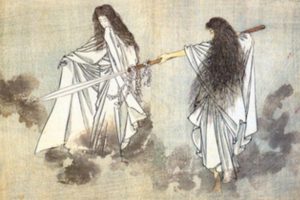 At the beginning of time, only Heaven was filled, and the earth was empty. The older deities gave Izanagi and Izanami permission to fill the earth below. Their first order of business was to use the spear to create the islands. After Izanagi and Izanami formed the islands of Japan, they stood back and took notice of their bodies and how they would fit each other.

In a collection of Japanese myths, Izanagi and Izanami discussed how their bodies could come together to procreate. Izanami said that she had a part of her body that hadn’t yet fully formed, and Izanagi said he had a part that had grown too much. They realized that if they put these parts together, they could bear children. After that, they performed a marriage that included walking around heaven’s pillars and meeting together in the middle.

But in the first ceremony, Izanami spoke first, which wasn’t allowed. As a result, the children they had were deformed, and they had to do the ceremony again. The second time, Izanagi spoke first, and the marriage was saved. Then, they were able to have/create the rest of the Japanese islands as well as a group of other gods and spirits.

One of their children was the fire god named Kagutsuchi, sometimes thought of like a dragon. However, this fire god burned his mother to death in his flames. Because he was so sad, Izanagi killed their child. He began to mourn for his wife, who had already traveled to Yomi, the Land of the Dead.

– Izanagi’s Journey to the Underworld

Since he knew that’s where his wife was, Izanagi decided to head down to Yomi, which was also called Yomi-no-Kuni. It was a dark and dangerous land, full of demons or trolls called oni as well as full of impurities. Izanagi was taking a great risk by going there, and once he was there, he was happy. He saw that Izanami looked just the same, but then he shone a light on her.

He saw the truth, and instead of looking whole and healthy, she was rotting away full of maggots and demons. Because she had eaten some of the food which was there in Yomi, she was cursed to remain there, and he could no longer save her. He had to run away, but Izanami was furious, and she chased him for a little. He was able to escape, but he put a boulder at the entrance to keep her from escaping.

Now that she was part of Yomi, she would only bring destruction and death if she escaped into the world. She swore to make 1000 people die each day, and Izanagi told her that he would make 1500 people be born each day to create a balance of life more than death. But she sent demons she bore while still a rotting corpse out into the world.

– Izanagi and the Birth of New Gods

After he ran away from Yomi, he had to clean himself because of all the impurities. So he jumped into a hot spring and began to wash himself off. This act was the inspiration for the cleansing ritual misogi, which became a ritual important to tradition and belief in Shinto. Izanagi cleaned his left eye, then his right eye, and then his nose, and something miraculous happened.

Out of his left eye came Amaterasu, the sun goddess, and out of his right came Tsukuyomi, the moon god. Out of his nose came Susanoo, and he declared that all three of these should be the rulers of heaven under him. Unfortunately, his two sons Tsukuyomi and Susanoo, had to be banished for bad behavior, and Amaterasu became the head of the heavens. Izanagi became the father of the Japanese Imperial Family through her line.

But he did appoint Susanoo to guard Yomi in his stead, and Susanoo is still in that position. Amaterasu is still in her position as well as head of the heavens, and her father became her advisor.

Izanagi and Other Gods

Izanagi’s stories and his position are similar to other gods and goddesses from other cultures. These included:

Greek mythology’s Orpheus and Eurydice: Orpheus had the same experience where his wife died, and he went to visit her in the underworld. However, because he didn’t follow the rules given to him about taking his wife out, he lost her

Greek mythology’s Hades and Persephone: This pairing is like Izanagi and Izanami because Persephone also couldn’t return to the land of the living because she had eaten some of the food of the underworld 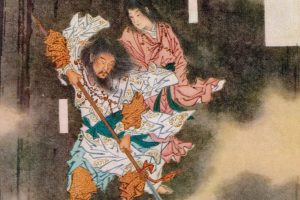 Take a look at the main points covered in the article above about the god Izanagi.

Izanagi was one of the gods who helped to start the earth and give it life. It had stayed empty for so long, and he and his wife were given the blessing to begin the population of the world. It was a difficult task and not one without sorrow. Not only was he able to bring life in unique ways, but he was also able to experience death in unique ways too, and he lives on, advising the ruler of the heavens.