Kagutsuchi: the Short-lived Japanese God of Fire and Volcanoes 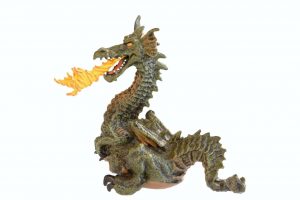 On a volcanic island like Japan, a god of fire such as Kagutsuchi gets a lot of attention. Believers in the Shinto religion used the story of Kagutsuchi to explain the creation of the Japanese landscape and the love-hate relationship with fire in Japanese culture.

Why Is a God of Fire Important to Japan?

The islands of Japan contain almost 10 percent of the active volcanoes in the world. For centuries, the Japanese people have endured frequent cataclysms, such as earthquakes, tsunamis, and of course, volcanic eruptions. Though the mountains have been relatively quiet recently, small eruptions still occur regularly.

Centuries ago, the Japanese people found an interesting and unique way to recover quickly from the numerous environmental disasters they faced. Instead of using heavy, labor-intensive building materials, they used light, thin wood for structure, straw for roofing, and even paper for inner walls. While these buildings collapsed more readily, they were less likely to cause injury, and the process of removing debris and rebuilding was relatively easy.

The downside of this plan was that these buildings were significantly more susceptible to fire. A simple house fire that would cause only minor damage in other civilizations would regularly devastate entire cities in Japan. In the capital city of Tokyo (formerly Edo) during the 17th-19th centuries, fires occurred so often that the people called them “the flowers of Edo.”

As the Shinto religion emerged, early believers needed to explain the geography of Japan as well as all the volcanic cataclysms that plagued the islands. The character of Kagutsuchi may have been influenced by the stories of similar gods in existing religions. However, it is more likely that the Japanese simply reached the same conclusions as the Greeks who invented Hephaestus and other cultures with volcano gods.

Who Is Kagutsuchi in Japanese Mythology?

Kagutsuchi’s name is a compound word in Old Japanese, meaning shining with power. Many similar versions of this name exist, including Hinokakabiko, Hi-No-Kagutsuchi, Kagu-tsuch, and Homusubi, whose name translates as he who starts fires.

In the Shinto religion, Kagutsuchi is a kami, a type of nature spirit. He is the Japanese god of fire and volcanoes. Like the Greek god Hephaestus and other volcanic gods, Kagutsuchi also serves as the patron of blacksmiths, sword makers, and artisans like potters and ceramics workers who use fire. His arrival heralded the beginning of the Iron Age in Japan when immigrants began bringing iron and other metal goods from mainland Asia around 300 BCE.

Kagutsuchi serves as a personification of both creation and destruction. He wasn’t specifically an agricultural god, but the Japanese were very aware that the ash from their volcanoes enriched the soil. Therefore, he also served as a minor god of vegetation and growth.

Though Kagutsuchi’s short-lived story is rife with violence, he is not viewed as evil or angry. Instead, he is somewhat ambivalent, like fire itself. Because of the circumstances of his death, there are few depictions of his appearance in historical Japanese art. Modern artists imagine him in many ways, varying between man and monster, but always accompanied by fire.

– The Short, Sad Story of Kagutsuchi: His Mother’s Demise 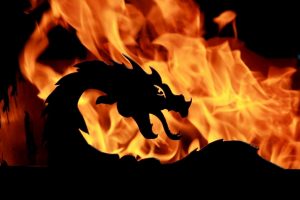 Kagutsuchi’s story appears in several historical works, including the Nihonshoki, the Chronicles of Japan, and Kojiki, the Records of Ancient Matters.

Izanagi and Izanami were the two creator gods of the Shinto religion. When they decided to marry, they made an error in the marriage ceremony, which resulted in the deformities of their first child, Ebisu. Embarrassed, they abandoned this child and remarried, correcting the mistake. Afterward, they created the islands of Japan and began populating them with kami, spirits of nature.

After countless kami were born, Izanami gave birth to Kagutsuchi, the god of fire. Unfortunately, the child emerged covered in flames, or by some accounts, was made entirely of flame. Izanami suffered a terrible burn as she gave birth, and soon, the burn would prove fatal.

Trying to hide her deadly injury, she asked Izanagi not to look at her for seven days and seven nights. However, curiosity overcame him, and he looked too soon. Izanami felt shamed that he saw her burned flesh, and she declared that she would soon become the goddess of the dead, leaving Izanagi to rule above.

Before her death, she did manage to have one mercy on the world. Despite her burned flesh, she gave birth to four more kami: Mizuhame, the Deity of Water, Haniyasubime, the Clay Mountain, and two unnamed kami, the Gourd Goddess and the Reeds of the River.

These four kami could assist in quelling the fires of Kagutsuchi if he became violent. After that, traditional fire fighting techniques included using wet clay and soaked reeds to smother the flames.

– The Short, Sad Story of Kagutsuchi: His Father’s Wrath

Kagutsuchi obviously didn’t intend to kill his mother. Still, Izanagi was inconsolable with grief and rage. One could wonder if he was also furious with himself since he disturbed Izanami’s confinement too early.

Izanagi took up his sword, called Ame-no-o-Habari-no-kami, and decapitated Kagutsuchi. When that didn’t quell his fury, he hacked his son into eight pieces and tossed them away. These pieces of Kagutsuchi joined the earth and became the eight major volcanoes of the Japanese islands.

Despite this violent end, Kagutsuchi’s legend had just begun. His body influenced the geography and landscape of Japan, and his existence provided reasons for the volcano- and fire-related disasters in the lives of the Japanese people. He continued to play a significant role in the Shinto religion, even to modern times.

– The Short, Sad Story of Kagutsuchi: His Accidental Children

In another way, Kagutsuchi remained alive because his death created new kami as well. The eight mountains created from the pieces of Kagutsuchi’s corpse became deities themselves:

Some sources suggest that the kami born from Kagutsuchi’s body and blood could act as a sort of hive mind so that Kagutsuchi himself could continue as a conscious being.

– The Worship and Recognition of Kagutsuchi

Kagutsuchi continues to receive honor and reverence from participants in the Shinto religion. Like other similar deities, this Japanese fire god has shrines in many temples to honor him and protect the temple from fire. However, Kagutsuchi wasn’t very good at containing himself. The kami Atago Gongen was the spirit that provided protection from fire, and three of his kami sisters existed specifically to subdue his flames.

Still, the Japanese people continued trying to appease Kagutsuchi directly. Twice a year, they celebrated the Ho-shizume-no-matsuri or the Fire Calming ceremony. The priests set controlled bonfires, called kiri-bi, to hopefully satisfy Kagutsuchi’s consuming hunger until the next festival.

Besides smaller shrines within other temples, Kagutsuchi has several shrines of his own. His primary place of worship is Atago-jinja Shrine in Kyoto. Ahika-jinja Shrine in Hamamatsu City, and several Nonomiya-jinja Shrines in Tokyo, Osaka, Sakai City, and other locations.

In popular culture, Kagutsuchi makes frequent appearances in various manga, anime, and video games. In the card game Yu-Gi-Oh!, he is one of the four XYZ Monsters of Bujin, along with Tsukuyomi, Amaterasu, and Susanoo. 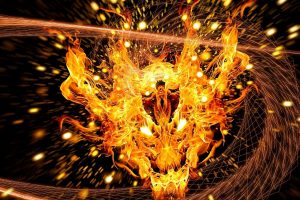 According to myth, Kagutsuchi was born and died before people populated the earth. Yet, he made a significant impact on the Shinto belief system and Japanese culture.

Though the story of Kagutsuchi is extremely short, he had a profound effect on Japanese mythology and is still one of the most worshipped kami in the Shinto religion.