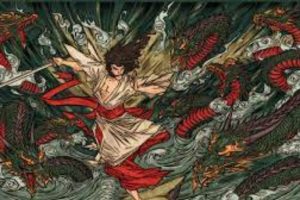 Susanoo is the god of sea and storms in Japanese mythology. He is the brother of the other storm gods Raijin and Fujin, and he was also similarly chaotic. He was also very powerful, and he carried a famous Japanese weapon. Read on to find out how he killed a dragon and created this renowned weapon.

Who Is Susanoo in Japanese Mythology?

Susanoo is the angry and powerful god of storms in Japanese mythology. His other name was Susanoo-no-Mikoto, meaning “Great God Susanoo.” He was powerful, chaotic, and wild, which didn’t bode well since he controlled the sea and storms. He was a kami, a Japanese god or spirit, and many of his shrines are located around the seas of Japan.

He had many other gods and spirits under his control. But he wasn’t always chaotic and out of control. Sometimes, like other gods, he could be loving and generous when he chose to be. He was a tumultuous god, but he still became one of Japan’s most well-known hero gods.

Like his other storm-related brothers, he has a disheveled appearance, reflecting his powers as a storm god. Susanoo was most famous for killing an eight-headed dragon with a sword and later received a new one called Kusanagi-no-Tsurugi. Because of his popularity, he appears in many myths in Japanese mythology. He is part of the Shinto religious tales.

Susanoo was one of the sons born of Izanagi, one of the Japanese creator deities. He was born after his father escaped Yomi, the Land of the Underworld, with two of his siblings. His famous siblings included Amaterasu, the sun goddess, and Tsukuyomi, the moon god. But he was more similar to his brothers Raijin, the thunder god, and Fujin, the wind god.

Depending on the story, his family changes. Susanoo had many wives and lovers and thus many children. These children came from both goddesses and human women. His first and most famous wife was called Kushinada-hime, and she gave him five children.

Because of his fame, he was part of a lot of interesting myths. He was, of course, famous for his ability to create storms upon the seas of Japan, but he was also a good warrior. Susanoo weapons gave him a chance at a new life after he made some mistakes. But first, he had a unique birth that came from washing off the impurities from the underworld.

Izanagi, Susanoo’s father, hurried to Yomi, the Land of the Dead, after his wife, Izanami, died. He hoped that he could still save her and help her return to the land of the living. But Izanami had already consumed some food from the underworld, so when Izanagi went to get her, she was already rotting away. Frightened, he rushed out of Yomi with her yelling after him.

He put a boulder in front of the entrance to prevent her escape, and she bore two children from her rotting body and sent them after Izanagi to wreak chaos. Izanagi rushed away from Yomi and knew that he needed to wash off all the impurities that were in Yomi. He found a hot spring and jumped in, scrubbing them off. But while he was washing his face, he “birthed” three different gods.

Amaterasu and Tsukuyomi came out of his eyes, and Susanoo came out of his nose. Izanagi decided that these three gods would be the highest of all the deities and would rule over the heavens. Susanoo was named guardian of the heavens as well. However, this decision to allow the siblings to work together to rule didn’t work out as well as Izanagi planned. 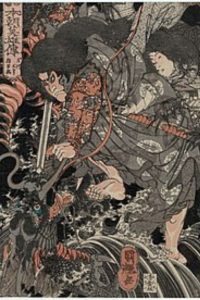 Susanoo was an angry god, and his temper couldn’t always be controlled. He was very difficult to work with between the three of them, and Izanagi decided to banish him from the heavens. On his way out, Susanoo went to see Amaterasu say a final goodbye to her. It was a strange thing to do since they constantly fought.

Amaterasu could see through this pretend act to be kind and sweet. So, she challenged Susanoo to a sort of competition. They decided to each take one another’s main possession and used it to create more gods. Once the gods were created, they would determine who won the competition.

– The Aftermath of Her Trickery

Susanoo was furious when he realized the trick she’d done, and he flew into a wild rage. It caused stormy weather as well. He destroyed a rice field that belonged to his sister, and he killed one of her horses. He threw the horse, and it killed one of Amaterasu’s favorite handmaidens.

She was so upset that she rushed away and hid in her sorrow, and Susanoo was finally banished. But because Amaterasu was out for some time, the world was dark for a time.

– Susanoo and the Dragon

Susanoo, like Lucifer in the Bible, fell from the heavens because of his banishment. He landed on earth in a place called Izumo, which is a city in Japan. A couple found him, and they took him in and told them about their latest sadness. In a nearby sea lived an eight-headed dragon named Yamata-no-Orochi, and he had already devoured seven of this couple’s daughters.

Their final daughter was waiting to be sacrificed, and her name was Kushinada-hime. As repayment for the kindnesses, Susanoo decided to help. This was one of the moments when he decided to show his benevolent side. He and the couple decided to entrap the dragon and save Kushinada-Hime from the fate that had befallen her sisters.

He lay in waiting for the dragon, and he turned Kushinada-Hime into a comb and put her into his disheveled hair. Outside of their home, the couple put a bottle of sake, hoping the dragon would come and drink it, making him fall asleep. The dragon did, and Susanoo crept upon him and cut him into pieces. Also, when he cut into the dragon, he was able to pull out a new sword called Kusanagi-no-Tsurugi.

With this famous act, Susanoo was able to get his life back. The couple, so grateful for what he did for them, offered their daughter to him as a wife. He married and took the new sword with him, hoping to make it up to his family. He gave this new sword to his sister, and she took Susanoo’s sword as a symbol of the restoration of their relationship.

Izanagi offered a new position to Susanoo to help him make up for the past. It was to take his place as guardian of Yomi, the Land of the Dead. Susanoo agreed, and he remains in that position even today. It makes sense that he was associated with death because storms and chaos so often bring death with them.

His famous sword is found as part of the Japanese Imperial Family’s regalia. It resides in the shrine of Amaterasu at Ise.

Susanoo and Other Gods

So often, gods have similarities with deities in other cultures. Susanoo is no exception, and his battle with the dragon Orochi was like other gods fighting reptilian creatures. These include:

Susanoo or Susanoo’s name appears in a few pop media: 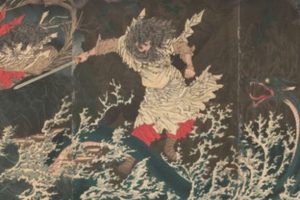 Take a look at the main points covered in the article above:

Susanoo, like other storm gods, had a wild and tumultuous personality. The Japanese people never knew when he would be malevolent, and that could be a frightening thing. But at least in his most famous story, he proved his kindness, and he was able to make amends with his family afterward. Unfortunately, we don’t know more, and we don’t know if he stayed benevolent or changed back to dangerous and uncontrollable.