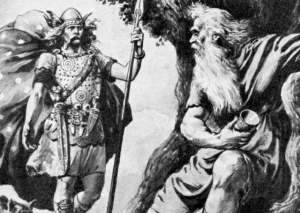 Norse gods have recently gained popularity with the appearance of Thor and his myth in Marvel movies. Not only that, but there are many television shows which make mention of the Norse gods and goddesses.

There is an appealing aspect to Norse mythology: its intriguing tales, magical powers, and powerful deities. This article will describe the details of the major Norse gods one by one.

Odin is the father of the Nordic gods or the Scandinavian gods, sometimes called the “All-Father.” He had one eye and often appeared as an old man with a long white beard. Despite his apparent age, he was a mighty warrior but would wander the realms as a traveler to gain new knowledge. Most of the time, he made his home in Asgard, one of the nine realms of the gods, and he led the Aesir, the primary pantheon.

His name means “fury, rage, or passion,” so he was also the god of these violent emotions. He could use his words to trick others into doing what he wished. Other gods used weapons to purvey their power and will, but Odin preferred to act as a sort of trickster god.

Even though Odin liked to play a trickster god, it was Loki who really took the title. He enjoyed weaving webs of deception and using his skills of trickery to pull off his schemes. His joys of fraudulent acts were made easier because Loki was a shapeshifter. He would use his powers to get what he wanted, whether wealth, women, or wisdom.

Loki was also part of the Aesir pantheon, and so he was one of the main gods in Norse mythology. But that pantheon desired order in their world. Loki often went against them by pulling off his schemes.

Freya is the beautiful goddess of love, fertility, lust, and blessings. She was a part of the Vanir pantheon, but she taught all the gods the ability to see into and interpret the future. She was seen as the kinder and gentler of the gods. Instead of using violence, she used her beauty to get what she wanted.

Depending on the mythology, some believe Freya might have been Odin’s wife. She might also be the inspiration for Friday, and it could be a derivation of “Freya’s Day.”

Baldur, or “Shining Baldur,” is one of the most prominent deities in the Aesir pantheon. He was known for his beauty and fairness, and he was considered the loveliest of the gods. He was so beautiful that he actually gave off light. He would use his charms to help settle disputes between both gods and men.

His name might have meant “bold,” “brave,” or even “white.” Because of Loki, Baldur met his death, and the other gods mourned him. His death eventually brought about Ragnarök, which means the end of days in Norse mythology.

Tyr is the Norse god of war and a mighty warrior. Even though he was a god of war who also represented bloodshed, he also fought for order and justice. He was part of the Aesir pantheon, and that’s what they sought in the world. However, he later lost his arm to Loki’s wolf, Fenrir.

Tyr had wrestled the giant wolf and lost his arm in the process. Not surprisingly, Loki was the cause of this, and Loki’s wolf would later play a part at the end of days. 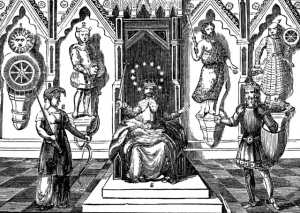 Heimdallr, or Heimdallr the Watchman, is the Norse god with keen eyesight and hearing. He watched over the gods and the passageways between each of the nine realms or worlds. He was also a protector of the deities and could sound the horn whenever the end of days began.

He had gold teeth, and many believed that he had been born of nine mothers who were also sea giants. He was also part of the Aesir tribe, so he sought to provide order and justice to the world. He might also have been a patron of human beings.

Freyr was the god of peace and prosperity, and he took his place in the Vanir pantheon. He was the beautiful Freya’s twin brother, and he was the son of a sea god. Not only did he bring about peace and prosperity, but he was also a god of a male’s sexual prowess, sunshine, and good weather. In art, he was often pictured with a large phallus.

Sweden heavily worshipped him. There, the people would celebrate him at weddings and other feasts. He and his twin sister were some of the most important deities in the Vanir tribe of gods.

Frigg is the Norse goddess of fertility, motherhood, and the home. She was possibly Odin’s wife and the inspiration for Friday, even though that role and title may also belong to the goddess Freya. Because of her marriage to Odin, she was the queen of the pantheon, and her children were Baldur and Hermod.

She isn’t very well-documented in primary mythology sources. So it’s not completely clear what all her attributes were. Because of this confusion, she might be Freya instead. But there is one difference. Freya was a goddess of sex and passion, and it was more hedonistic, while Frigg was a goddess of love and sex with a more conservative edge.

Njord is the god of wind and the waters. He was the patron of fishermen and sailors, and he was the father of the twins Freya and Freyr. He was the leader of the Vanir tribe of gods. He led the battle against Odin and the Aesir tribe during the Vanir-Aesir war.

They later found peace together. Njord was worshipped by fishermen and anyone who hoped for safe passage or bounty from the sea. He was worshipped for the most part in Norway.

Thor is likely the most recognizable name among the Norse gods and goddesses. He was the god of thunder and lightning and the picture of male strength and virility. Also, Thor was one of the sons of Odin and thus part of the Aesir tribe. Furthermore, he could command wind and storms and wield thunder and lightning.

He had the famous hammer, called Mjölnir, and he used it in battle. The opposite of Loki, who would use his cunning to get what he wanted, Thor used strength and violence to achieve his goals. He was also associated with fertility because he had many lovers as well as many children.

Idun is a young goddess, and she was associated with youthfulness and fertility. Her major role in Norse mythology was to hand out magical apples to the other gods. These apples could give their eaters a return to youthfulness and reversed aging. Her name meant something like “young one” or “rejuvenator.”

She carried these special apples in a wooden box. They became her main symbol.

Nerthus was a goddess of peace and prosperity, but there is not much written about her. She was linked with Njord, the sea god, but it’s unclear what their relationship was. Germanic villages worshipped her. She was especially revered during a special cart ritual.
This goddess was believed to live off the coast on some unknown island.

Helheim is one of the nine worlds or realms in Norse mythology. It is also called the “House of Hel.” There rules the Queen Hel, daughter of Loki. It is the realm of death and is part of Niflheim, the lowest part of the universe. If one dies of old age, disease, or some other death will go to Helheim.

But those who die bravely in battle go to Valhalla. It is said that once men or gods enter Helheim, they can never get out. There in Helheim, the entrance is guarded by a beast, like a hound, named Garm.

Jotunheim, anglicized from its Norse name, is the land of the giants. Only a river separates this land from Asgard, and it is also one of the nine worlds in Norse mythology. Its other name is Utgard, which means “Beyond the Fence.” The belief was that Asgard was the place of order and law, and Jotunheim was the land of chaos and wildness.

It was a wilderness there. When Christians later took over the areas which formerly worshipped the Norse gods and goddesses, this could have changed.

Alfheim is the land of the elves in Norse mythology. In this land, the elves would live and act as demi-gods. Scholars believe that this land was also one of the nine realms. It was a beautiful place as well as full of light. Freyr was stated to be the ruler of this realm in certain sources, although that adds a lot of confusion.

It’s not clear what relationship the elves had with the gods of the Vanir tribe. But perhaps they were connected in more ways than one, leading to Freyr being their ruler. 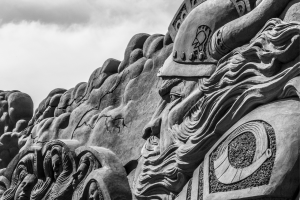 Norse mythology is a fascinating mixture of powerful tales, wild and dangerous lands, and great magical powers. From magical apples that bring youth to a strong hammer that could defeat enemies, the gods of Norse mythology have stories that are definitely worth reading. It’s no surprise, then, that they’ve made their way into current media. The old Norse gods have stories that can be told again and again.