Baldur: The Tragedy of Odin’s Son 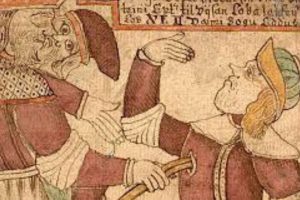 Baldur, god of beauty, wisdom, and fairness, was the most beloved of all the gods in Norse mythology. He was also the most beautiful and likely the most important god in the Norse pantheon, Aesir. He was one of the mighty sons of Odin, and he was so beloved because of his power to resolve conflicts. Despite this, his life ended in a tragedy. Read this article to find out how the most beloved god met his tragic death.

Who Is Baldur in Norse Mythology?

Baldur is a god of beauty, wisdom, and fairness, and he ranks very highly in the Aesir pantheon of Norse mythology. It was the primary pantheon for the Norse people, and this pantheon strove to provide order and justice in the world. Odin was the head of this pantheon, and with his wife Frigg, they bore Baldur, who became the ultimate peacemaker. Baldur’s powers were that of a peacekeeper among the gods and men, so he was just as beloved by humans.

Baldur has also been written as Balder or the Old Norse Baldr, which means “bold” or “brave.” But his name may come from the Indo-European word “bhel,” meaning “white.” This white would imply light as opposed to color, and it fits. Baldur was so beautiful that he gave off light, and that is why he is sometimes called “The Shining God” or “Shining Baldur.”

Not only was Baldur beautiful, but he was also charming, kind, and very likable. He was always there to provide help in disputes, and everyone liked him. Unfortunately, there was one god who didn’t very much like him. His name was Loki, and he was the cause of Baldur’s death and, subsequently, the great grief of the gods and the Norse people.

What Is Baldur’s Symbol?

Baldur had a couple of symbols attached to his name. Of course, he is associated with light because of his beauty, but he actually had two “items” that provided him aid. One of them was a fast ship named “Hringhorni,” which was considered the most incredible ship ever built. Sadly, this ship was used as Baldur’s funeral pyre after his death.

The other “item” that Baldur had in his position was his great horse, Léttfeti. With his horse and his family, Baldur lived in a palace named Breidablik, which meant “broad-gleaming.” Like Baldur, it shone with light, and in a particular story, Odin said it was the most peaceful of places and was without evil.

Origin: How Was Baldur Born?

Baldur was the son of Odin and Frigg, Odin’s wife. Odin was the “lord” of all the gods in the Aesir pantheon. Since it was the primary pantheon, he was the greatest of all the gods. His wife had the gift of foresight. She is often confused with Freya, the goddess of fertility, motherhood, another powerful goddess.

It’s unclear whether they were one and the same or two separate goddesses.

Family of the Shining God

Baldur had a brother named Hodr. He also had many half-siblings: Thor, Heimdall, Tyr, Vidarr, Hermod, Bragi, and Váli. Váli was conceived by Odin and a giantess named Rindr. Furthermore, he was born to take revenge against Loki after Baldur’s unfortunate death.

Baldur also had a wife named Nanna, another goddess, and they had a son named Forseti. Forseti himself was also a god of peace and justice. After he grew up, Forseti followed his father’s legacy. He built himself a hall he named Glitnir, and it was there that he resolved conflicts and dealt out justice.

Baldur was one of those gods from mythology better known for their death. The death of Baldur was such a loss to the people and the gods. It went down in his history as the most famous thing that could have happened to him. Details of Baldur’s death come from the 13th-century Icelandic anthology “Prose Edda,” written by Snorri Sturluson. 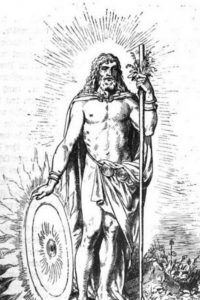 But before he died, Baldur’s mother, Frigg, had a premonition that he would die in a dream, and it terrified her. Because Baldur was so well-liked and brother Hodr was blind, it’s safe to assume most likely that she considers Baldur her favorite child. Baldur, strangely, had the same exact nightmare about his death, and dreams were significant to the Norse people. They believed any dream could be a premonition.

Because Frigg/Freya and Baldur both had a frightening nightmare, Odin traveled to Helheim, the Norse version of the underworld (or one part of it at least). He rode to this place on the famed eight-legged horse named Sleipnir. Odin needed to find an oracle to help him decipher the dreams and tell him if it was really true or not. There, he was successful, and he found a powerful one who used the magic of foresight, seidr, to determine the future.

However, because Odin was in the realm of the dead, the oracle was not alive, and he needed to use his own magic to raise her up. She didn’t like it, though, and she refused to answer Odin’s questions about Baldur as a way of revenge. But Odin didn’t give up, and he eventually pressed her so much that she finally told him he was right. Baldur was going to die, and everyone who loved him would grieve deeply.

Odin rode back to his home, heavy-hearted with the news. He told his wife, Frigg, and she was devastated that her beautiful son was bound for early death. As a result, she used a bit of her own magic to try and protect him. Unfortunately, the oracle didn’t reveal how Baldur would die, so Frigg didn’t exactly have a way to direct her protection spell.

According to “Prose Edda,” Frigg asked for protection for her son against almost everything: fire, water, weather, illness, animals, venom, iron, metal, nearly everything under the sun that could cause harm. After that, Baldur was impervious to everything. Even his brothers enjoyed playing around with his immunity to danger, but nothing touched Baldur, and Frigg was comforted.

Loki, the trickster god and little liked among the gods, learned about this spell and resented Baldur for it. He was a master of disguises, and he disguised himself as a woman and went to meet Frigg to ask her whether she’d asked for protection from everything. Just thinking this was an ordinary woman, Frigg answered that she hadn’t asked for protection from a sprig of simple mistletoe. Loki knew then what he would do.

How Does Baldur Die in Norse Mythology?

Loki enjoyed causing the misfortunes of others, so he hurried away from Frigg to find himself a sprig of mistletoe. He returned to the gods later and saw that Baldur and his brothers were playing again at trying to hurt Baldur with spears and other weapons. Baldur was surviving, and they enjoyed making sport of it. Loki snuck up to Baldur’s brother, Hodr, and he handed him a spear on the end of which he had tied the sprig of mistletoe.

He told Hodr to throw the spear at Baldur, and he did eagerly, wanting to continue the game. However, the game was over, and Baldur was on the brink of death. As he lay dying, Odin knelt next to his son and whispered something in his ear. These words remain a mystery to this day.

Baldur was likely the only god killed by mistletoe. While it was strange, it was most certainly unique.

– The Aftermath of Baldur’s Demise

Baldur finally died, and his family was full of sorrow. Frigg especially was distraught, and she called for someone to go to the realm of the dead to beg for the release of her dear son. Baldur’s half-brother Hermod, Frigg’s son, agreed to go, and he rode away on Sleipnir. He traveled for nine days and nights, and then, he finally arrived to find Baldur seated at a table, looking downtrodden.

Hermod asked Hel, the goddess of death, to release his brother. He begged her, telling her that Baldur was the greatest and most beloved god and that everyone was in great sorrow at his loss. Hel agreed, saying that she would do so, but only if everything wept for the loss of their god. Hermod hurried back to his family to tell them the good news, and everyone went far and wide to command everything and everyone to weep for Baldur.

Everything was told to weep from humans to stones, and at the end, everything was weeping for him, but they had one more thing to visit and command to weep. It was a giantess named Thökk, who was really Loki, another disguise. The giantess Loki refused to weep for the dead god, forcing Baldur to stay in Helheim for eternity.

Sadly, the family had to accept that Baldur was dead. So they laid him out on his ship along with his wife, who had died of grief. The horse was also sacrificed on this pyre, as once they set out the ship on the sea, they set it ablaze.

– A Father’s Vengeance for Baldur

Odin was not willing to let his son die in vain. He knew who had killed Baldur, so he slept with the giantess Rindr to create a strong son. This son, Váli, grew up strong in one day, and sadly, killed Hodr for throwing the spear. Then, he searched for Loki, and when he found him, he tied him to a rock, using the entrails of Loki’s son to do so.

Even though he was a famous god, he doesn’t appear in much media. His name is found in: 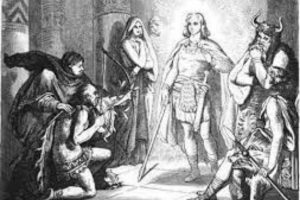 Baldur was a beautiful god who had a tragic end. Take a look at the main points covered in the article above:

Baldur was a god who was kind to all, promoting peace among both people and gods. It’s a familiar story where there is jealousy among the gods, and death is a result. Sadly, Baldur was less known for his good deeds and peacemaking and more known for his infamous death. As again is common, the murderer and the murder gain more popularity and legacy than the victim.