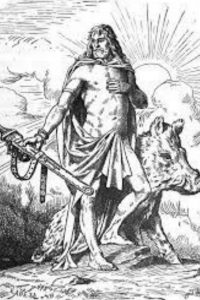 Freyr, god of peace and prosperity, was one of the most prominent deities in Norse mythology. He was part of the Vanir tribe of the Norse pantheon, but he also held an honorary role in the Aesir tribe as well. He was also seen as the Norse god of sunshine, male virility and was possibly even a Norse god of rain. Read on to find out about Freyr’s sword and how he met his end in Ragnarök.

Who Is Freyr in Norse Mythology?

Freyr, half of a set of twins, was the Norse god of peace and prosperity. He was also a god of sunshine, good weather, and male virility. He was often pictured with a giant phallus to prove his virility, and he was one of the most beloved of the gods. That makes him similar to Baldur of the Aesir tribe, who was loved and revered by all.

Freyr had multiple secret weapons that added to his powers. He had a ship named Skidbladnir which was made by dwarves in their realm, and it was very fast. At the same time, he could easily fold it up and carry it in his pocket, only pulling it out when he needed it. He also had a boar, made by the dwarves as war, and it was a mechanical boar.

Freyr’s boar was also very fast, and its mane glowed in the dark, so Freyr could see wherever he went. Lastly, he had a sword that could defeat any enemy, and it could fight on its own without Freyr to wield it. Freyr lived in the realm of elves, called Alfheimr, and so it is understood by some that he might have been an elf or that he ruled over them. He was worshipped all over Scandinavia, but he was most popular in Sweden.

Origin of Freyr: How Was Freyr Born?

Freyr was the son of Norse god Njord, and likely, his mother was also his aunt and father’s sister. His birth story isn’t known, but what we do know is that he had a twin sister named Freya. Freya and Freyr were similar because she was the goddess of love and beauty and thus also associated with sex and virility.

Unfortunately, despite his popularity among the Norse people, we don’t know too much about Freyr. We get his stories from the 13th-century Icelandic scholar Snorri Sturluson’s compiled works.

– Freyr and the Aesir-Vanir War

This isn’t a very detailed story, but there was a war between the two tribes of the Norse pantheon, the Aesir and the Vanir. Freyr was one of the most powerful warriors in the battle, but he was eventually caught by the Aesir side and taken hostage. While he was there, he earned the respect of the Aesir side and so was considered as part of them.

– Freyr’s Seduction of a Giantess 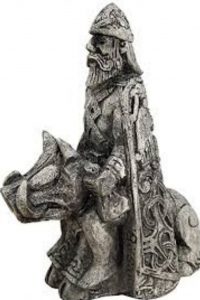 Freyr was not yet married, and one day, he was in Asgard, and he sat in Odin’s seat. Odin’s throne was named Hlithskjolf, and from there, one could see almost all the world. While he was there, he spied a beautiful woman, and as he watched her, he saw something unusual. As she stepped into a house, she lifted her hands, and a great light came out of her hands, illuminating everything around her.

Freyr realized that he wanted her, and as so often happens when an obsession takes hold of one’s mind, he couldn’t think about anything else. He got so depressed that he couldn’t eat or drink anything, and he didn’t want to see anyone. His father Njord was so concerned that he sent a servant to go visit Freyr to see what the problem was. The servant’s name was Skirnir, and Freyr asked him to go and find the woman and woo her on his behalf.

The servant agreed, but he asked that gave him his special sword as a reward and as a way to protect himself. The woman’s name was Gerdr, and she was a giantess, so Skirnir needed a weapon to protect himself as he entered the land of the giants. He went in, and he was successful. Gerdr learned of Freyr’s love, and she agreed to his proposal.

– Why Did Gerdr Agree?

Unfortunately, it wasn’t as simple as Gerdr saying yes to Freyr’s proposal of marriage. First of all, he didn’t go and find her himself in order to ask her; he sent a servant to do it on his behalf. Also, Gerdr had no idea about this faraway god who had an interest in her. She had never laid eyes on him before, and so Skirnir had to use various ways in order to convince her to accept Freyr.

When he arrived at Gerdr’s residence, he had brought a few apples of youth with him. Apples of youth were the gifts of the goddess Idun. He told her of Freyr’s proposal, and he offered her the apples if she would accept him. Gerdr wasn’t convinced, and she refused Skirnir’s offer.

After that, he offered her other gifts, including Odin’s ring, also called Draupnir, and she still refused. After that, Skirnir turned nasty. He started spewing curses at her, including curses of the runes, and she was frightened. She decided it would be better to accept the proposal than have to suffer at the whims of the curses Skirnir had told her about.

At the price of his betrothal to Gerdr, Freyr had given up his special sword to the servant Skirnir. But it would prove to be his undoing. It was his main weapon that he took into battle. He was lucky for a time.

For example, he fought with a giant named Beli, and he had to use the antler of a deer in order to kill him. But later, once the end of days began, or Ragnarök, he went into battle without a sword, and it spelled his end. He was killed at the hands of a giant named Surtr.

What is Freyr’s Symbol?

Freyr’s symbols vary because of the various items he always had with him: the boar, the sword, and the ship. But likely, his most famous symbol was that of the phallic. It represented his virility and his association with sex.

Worship of the God of Peace and Prosperity

People would worship Freyr mainly at weddings and harvest festivals. He was sometimes considered a Norse god of harvest. Because he was a Norse god of weather, fair weather, he was also an agricultural god. They would call upon him for good harvest as well as success in the marriage.

He doesn’t appear in pop culture media, but his name remains in multiple locations around Scandinavia. 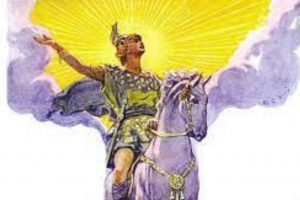 Freyr was one of the most revered gods in all of Norse mythology. Check out the main points about the god Freyr that were covered in the article.

It’s interesting how many of the well-revered gods don’t have many stories to their name. They don’t appear in much media, and it seems that they’ve disappeared altogether. Freyr was a heavily worshipped god because the people’s harvest success depended on his generosity. And Freyr’s legacy remains in his name, being used for towns and cities all over Scandinavia even today.