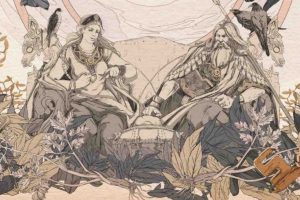 Frigg, goddess of fertility, motherhood, and the home was mostly known for her role as Odin’s wife. Because she was his wife, she was the queen of the Norse world and the Aesir tribe of the Norse pantheon. Unfortunately, she doesn’t appear in many sources, and she and the goddess Freya might have been two forms of the same person. However, you can read about how she used her magic powers to try and save her famous son.

Who Is Frigg in Norse Mythology?

Frigg was Odin’s wife and queen in Norse mythology. She is often considered the Norse goddess of motherhood, fertility, and the home, like Juno in Roman mythology. As wife of Odin, she was considered the queen of all the Norse gods, even beyond those in her Aesir tribe. Beyond fertility, motherhood, and the home, she got involved in matters of love, sex, as well as prophecy.

She was a devoted mother, and it was evidenced in the stories that are told about her. Uniquely, Frigg was able to wield certain magical powers or seidr in which she could attempt to change the future through certain rituals. There is a little confusion about Frigg and the great similarity to the other goddess Freya. They might have actually been the same goddess and just branched off into two versions over the years.

Frigg, while involved in sexual matters, was more known for her sexual morality. But Freya was more well-known for her sexual promiscuity and reputation as a temptress. Frigg’s name might have meant something like “beloved dear.” But she is also the goddess whose name inspired the name Friday or “Frigg’s Day,” but because we don’t fully know about the differences between Frigg and Freya, Friday might also be “Freya’s Day.”

While we don’t know that much about her, we do know that she lived in a watery dwelling place named Fensalir before she married Odin. It was there that she lived with another goddess, Fulla, who carried around Frigg’s special box. This box, or eski, was ashen, and in it, she carried something mysterious. We do not know what it was.

However, some scholars believe that it contained certain falcon feathers that, when worn, could turn you invisible. Certain gods used these feathers, including Loki. And the goddess Freya is also connected with these plumes.

Origin and Family: How Was Frigg Born?

Frigg’s beginnings are mostly unknown, so we don’t know anything about her parents or where she hailed from. Once she became Odin’s wife, she stepped into the “scene” of Norse mythology. With Odin, she had Baldur, the “Shining One” as well as Hod, who was blind. Because Odin had many other children with other women, she was also stepmother to famed gods such as Thor and Heimdall.

Myths of Frigg, Queen of the Norse World

– Frigg and the Two Boys 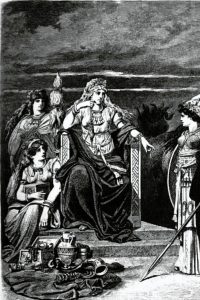 After many years, the peasant returned Geirröth to his former kingdom, where he found out that his father, the king, had died. So the people there accepted him as their new king. Strangely, though, the peasant and his wife turned out to be none other than Odin and Frigg in a shapeshifted form. They were in their throne room, watching over the nine realms of the Norse world, when Odin praised the son he’d raised and insulted Agnar.

Frigg was furious. Odin had said that her foster son slept with a giantess in a cave and had children with her. Frigg returned with a barb of her own, saying that Geirröth was so miserly that he would torture extra guests that would come to his gatherings. The couple disagreed on the insults given to each of their foster sons, and so they decided to make a wager.

– Frigg, Odin, and the Wager

The wager was as follows: Odin would go to Geirröth’s kingly court in disguise, and he would find out the truth about Geirröth’s miserly ways. After Odin left, Frigg sent a messenger to Geirröth to let him know that a wizard would soon be coming in an attempt to bewitch him, and he should beware. Odin disguised himself as a man named Grimnir, come to visit the king. Geirröth was suspicious, and when he asked this Grimnir for more details about himself, Grimnir said nothing besides his name.

So Geirröth had him tortured and put him between two fires, letting him sit there for eight nights. The youngest of Geirröth’s sons brought Grimnir some ale, and it was then that he told a story to the young man. This story would go on to become the greater part of the tale in “Poetic Edda.”

But Frigg no longer appeared in the story after that. Despite her disappearance, she won the wager against her husband and proved herself to be a loyal and fierce mother even to her foster child. Her loyalty as a mother continued into her next and most famous tale.

– Frigg and the Beautiful Baldur

Frigg’s likely favorite child was Baldur because of his wisdom, kindness, and beauty. Frigg’s son was called the “Shining One,” and he helped to resolve conflicts between gods and between men. He was well-loved and incredibly charming and beautiful. But one day, he was killed, and Frigg was devastated.

It all started when Baldur had a terrible nightmare about his death, and when he told his mother about it, she said that she had had the same nightmare. She asked her husband Odin to go to the realm of the dead in order to find out if it was a true premonition or merely a dream. Odin did so, riding on his eight-legged horse to meet with the goddess Hel. There he found an oracle, and he asked about the truth of the premonition.

The oracle revealed that it was true and that those who loved him dearly would mourn greatly for him. Odin, heavy-hearted, returned to his wife and told her what would happen. Frigg tried her best to alter the future with her powers. She used her magic to state that nothing on earth could harm her son, whether weather or metal or disease.

She received oaths from everything that they would not harm her son, and she felt confident that her attempts would work to prevent his death. But Loki, the trickster god, approached her in disguise, asking if it was truly nothing that could kill her son. She told him that she had not gotten an oath from the plant mistletoe. So, Loki rushed off to find mistletoe, and he attached it to the tip of a spear.

When he returned to the family, he saw that Baldur’s brothers were throwing weapons at Baldur, in a teasing way, enjoying that he couldn’t die. Loki approached the blind brother, Hod, and he handed him the spear with mistletoe, telling him to throw it at his brother. Hod did, and then Baldur fell, mortally wounded. He later died, and so Frigg, devastated, asked for Hermod to hurry to Hel again to ask the goddess to release him from the realm of the dead.

He did so, but the goddess didn’t agree. He suggested that so many were mourning for him, and she told him that she’d allow Baldur to leave if every living thing cried for him. Hermod returned to the upper world, and he and his family asked every living thing to shed tears for Baldur. Everyone did, except for Loki who was disguised as a giantess, and so Baldur had to remain dead forever.

It’s likely the eski box she would carry around was one of Frigg’s symbols. In it, were her special falcon feathers that would make the wearer invisible. That is probably the most likely symbol for Frigg, Odin’s wife. Her other symbols included mistletoe, silver, and the spinning wheel.

Frigg was an interesting character in Norse mythology, and in the small number of stories she featured in, she showed her power, loyalty, and love.

Frigg was the Queen of all Norse gods, and appropriately, a lot of art from the 17th and 18th centuries showed her on a throne. She was a powerful goddess, and even though we don’t know much about her, her strength is evident in her stories. She was good and loyal, determined to fight and even change the future to save those she loved. It is just too bad that much of her story has been lost to time; perhaps we could have learned more about her powerful attributes.