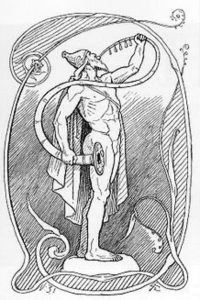 Heimdallr, god of sight in Norse mythology, was the guardian of Asgard. His name sometimes also appears as Heimdall, and he is known for his ability to see the end of days before the other gods. When he did so, he was to blow the famous Gjallarhorn to alert all the gods. Read this article to find out how he came to be as well as how he was the origin of the Norse social classes.

Who Is Heimdallr in Norse Mythology?

Heimdallr was called a watcher or a watchman in Norse mythology. He was part of the Aesir tribe, and he guarded Asgard to protect it from both enemies as well as alert the others to Ragnarök, the end of days. He was not only a protector of Asgard, but he was stationed at the pathways between the nine worlds/realms of the Norse world. So, he protected them all from enemies.

Heimdallr’s powers were perfect eyesight and hearing. His hearing was so good that stories said that he could hear wool growing on sheep, and Heimdallr’s eyes were so good that he could see over three miles away. He also had gold teeth and didn’t need much sleep, and he was ready to blow his horn, Gjallarhorn, at any time which would call the gods to begin the final battle. Heimdallr lived in a golden castle called Himinbjörg, meaning “sky castle” or “castle in the Heavens.”

It was positioned at the Asgard side of the Bifrost, the burning rainbow bridge which connected Asgard to Midgard, the world of humans. It was said to be a beautiful place, one of the most beautiful places in all the Nine Realms. Heimdallr was one of the sons of Odin, and Heimdallr’s mothers were said to be nine sea monsters, which could be a reference to his connection with the nine worlds.

Names and Etymology of Heimdallr

Heimdallr had a number of names. While Heimdallr and Heimdall are his most popular ones, he also sometimes went by Hallinskidi, or “the horned.” Heimdallr had a mixture of meanings, and some of them might have been “radiant,” “world,” or “eminent.” Altogether, his name might have meant something like “radiant world” or maybe even “the one who illuminates the world.”
He also had three other names:

How Was Heimdallr Born?: Heimdallr’s Family

There are no written accounts of Heimdallr’s beginning or childhood. All we know is that the stories say he was born of Odin and the nine sea monsters. His mothers’ names were:

Because he was Odin’s son, he had many half-brothers such as Thor, Vidarr, Baldur, etc. He was even related to Baldur’s blind full-brother, Hodr. Heimdallr took no wives and was not known to have any godly lovers. However, he did sleep with a number of humans. This leads him into his most famous myth.

Myths of Heimdallr, the Guardian of Asgard

Despite his fame, Heimdallr didn’t have as many stories as other gods, but they were interesting ones. Heimdallr was connected by the rainbow bridge to the human world. In the poem “Rígsþula,” it describes how he went to earth and reproduced with humans.

– Heimdallr and Midgard, the Realm of Humans 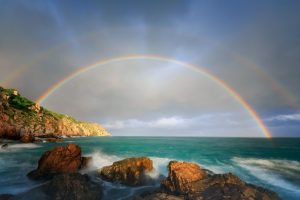 One day, early on in mythology, Heimdallr disguised himself as a human and traveled to the human world and went by the name Ríg or Rígr. It was easy enough to do as he was living on Bifrost, the bridge that connected the worlds. He traveled around the countryside, passing from house to house and meeting with the people that lived there. He found couples and would stay three nights with them, and he would sleep with the women.

He ended up fathering three children of very distinct qualities. Their names were Thræll, Karl, and Jarl. Thræll was an ugly child, and he had big, calloused hands that were ready for work. Karl was sturdy with a red face, and Jarl was a beautiful blond boy who had blue eyes and who loved adventure and war.

This started the Norse social classes: slaves (thralls), free laborers, and aristocratic-warriors (nobility). The poem continued to describe how the boys grew up. Later, Jarl had a son named Kon, who Heimdallr adopted as his own son. He adopted him in hopes that his grandson would be king when he too grew up, and so he taught him his runes.

– Myth and the Creation of Social Division

It’s unclear why Heimdallr chose to unite himself with the humans. He was later called the patron/father of humans, and perhaps he acted as a sort of “go-between.” The Aesir tribe of gods loved and established justice and order. So, it perhaps makes sense that Heimdallr, part of that tribe, went to create social divisions among the humans.

In his mind, it was a way to order the people and the world. He was the beginning of these divisions in the human world. For those in the Norse human world, this poem and this story helped to bolster their beliefs in the need for “social order” and social classes. This organization was deemed appropriate by the gods, and so it made it easy for it to thrive.

In another tale, Thor lost his hammer to a giant named Thrym. This story can be found in “Prose Edda” in the story “Thrymskvitha.” “Prose Edda” was written by a 13th-century Icelandic scholar named Snorri Sturluson, and we can find many tales of the Norse gods within its pages. Thor realized that his hammer was stolen, so he went to speak to the gods to ask them for assistance in finding it again.

Loki, one of the trickster gods, took Freya’s cloak, which granted him the ability to fly, and he went off to find it. This cloak was made of special falcon feathers, and Loki used it to go to Thrym to find out if it was true he had stolen the hammer. Loki returned to the gods and told them that Thrym had taken the hammer, and he would return it if he received the goddess Freya in return. The gods met together to decide what to do.

Heimdallr came up with the idea that they would dress Thor like Freya. Then he would go to Thrym’s living place to get the hammer. Heimdallr knew the future, and he knew this plan would work, and it did! Thor found the hammer, and he killed everyone who was there at Thrym’s for a party.

– Heimdallr and the End of Days

Heimdallr was the only god who could see Ragnarök (the end of days) before any of the other gods. If he saw it coming, he would sound his trumpet, and the sound would reverberate through all the realms of the Norse world. The gods would be warned, and then they could come to battle against the jotnar or the “creatures/beasts” of the world as well as Loki. Loki, even though he was a god, would be against them at the end of days.

He had betrayed them by killing Baldur, the most beautiful and benevolent of gods. The prophecy stated that Heimdallr would play a role at the end of days. Loki and Heimdallr were fated to battle against one another. And strangely, they would be fighting in the form of seals. Heimdallr’s death might come about at the hands of Loki, but Loki might also die at the watchman’s hand.

There are multiple symbols associated with the guardian of Asgard. He had a powerful sword, rode a golden horse, carried a powerful trumpet, and was connected with the sea, roosters, gold, and rams. Heimdallr’s sword was called Hofund or the Bifrost Sword. He carried it with him to be able to defend the words from enemies.

And he was associated with rams and roosters because of his power as well as his ability to alert. Heimdallr’s rune was Maðr, also called Mannaz or Mann.

One of the most popular examples of Heimdallr in media is in Marvel Comics. He also appeared in the Marvel movies played by Idris Elba. He was the guardian of Asgard. And he controlled the path between the worlds as well as between Asgard and the realm of humans.

In the movies, Heimdallr was also associated with a Soul Stone. Heimdallr’s stone was one of the six infinity stones that Thanos, the villain, wanted to get. 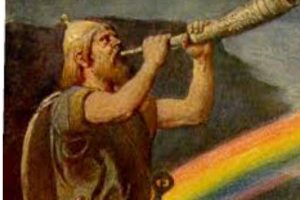 Heimdallr is one of the most well-known and central deities in the Norse pantheon. Check out the list of main points covered in the article above:

Heimdallr was the famed guardian of Asgard, and he was the one who would watch for the end of days. While he didn’t have as much of a godly role as many of the other Norse gods, he was integral to the Norse pantheon surviving. He was there at the ready constantly so that they could be prepared for battle when it came. Perhaps he still waits and watches for Ragnarök, and let’s hope he’s able to defeat Loki when the time comes.