Idun: The Goddess with Magic Apples 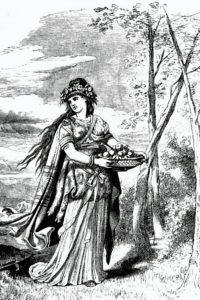 Idun, the goddess of youthfulness and fertility, was one of the most interesting goddesses in Norse mythology. She was the one responsible for keeping the gods looking ‘young’ with her special apples. Those who consumed them would be granted youth once more. Read on to find out about her famous abduction by a giant.

Who Is Idun in Norse Mythology?

What set of myths would be complete without a goddess of youth? Idun takes that place as the Norse goddess of youth in mythology. She was not only a goddess of youthfulness but also fertility since she is attached to the young. Her very name meant something like ‘young’ or ‘the rejuvenator’ or even ‘ever-young.’

Idun had two main things that gave her fame: her apples and her abduction by a giant. Idun had apples of youth, that if you consumed them would keep you looking and feeling young. So, the gods often called upon her whenever they started to feel or look old, and she would bring them another batch of youthful apples. They would rejuvenate, hence the name she was given.

She would carry these apples in an ash box called an eski. She was married to a bard or poet in Asgard. Yet despite her abduction and apples, there doesn’t seem to be too much else known about this goddess.

Idun’s Family: How Was Idun Born?

The only thing we know about Idun is that she was married. We don’t know about her beginnings, her parents, or her other family. She was married to a bard or poet named Bragi. He served as the poet to the court at Asgard.

He was also the “voice” in some of the stories of the “Prose Edda.” This was written by a 13th-century Icelandic scholar named Snorri Sturluson. We don’t know too much else about Bragi and Idun or what their relationship was like.

Myths of Idun, the Youthful Goddess

Sadly, we don’t know much about the beautiful goddess who could give beauty to others. But her story with Thjazi the giant is interesting, indeed.

– It All Started With a Talking Eagle

One day, the gods Odin, Hoenir, and Loki were out traveling together, and they got hungry. Odin was the chief of the gods, or the All-Father, and Loki was a trickster god. Hoenir was also a deity and a friend of theirs but from a different tribe of gods. The three of them were traveling through the mountains of Asgard, and they saw a herd of oxen.

So, being hungry, they took one, and they cooked it, hoping to ease their hunger pangs. As they started to cook, they thought it was working, but it wasn’t. Unbeknownst to them, there was a talking eagle who used magic to stop the fire from heating and cooking the meat. It happened a few times before the gods became infuriated that it wasn’t working properly.

It was then that the eagle made his presence known. He flew down and said that he wanted his own portion, and if he was given it, then he would allow them to cook the meat. The gods agreed, and the bird joined them, hopeful to share a freshly cooked meal. 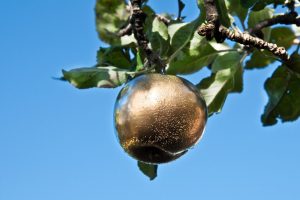 Loki was always up for doing all kinds of tricks, and this moment was no exception. He waited until the bird flew down towards them, and he took up a stick and tried to hit it. The eagle was too clever, and he bit onto the stick and flew away. Loki was too slow to let go, and he was stuck, flying off with the eagle, fearful for his life.

Eventually, the eagle got high enough that Loki begged to be let down safely. Right then, the eagle revealed himself to be a giant named Thjazi. This giant could magically transform himself into any animal he liked. He said that he would let Loki down, but he wanted Idun and the apples for his own.

Loki said nothing to the other gods once he was brought down to the ground. The gods eventually returned home. Loki set about creating a trap for the goddess of youthfulness so that Thjazi could have her.

– Idun and the Abduction

Loki planned his abduction of Idun, and he told her to come to a certain forest. It was there, he told her, that she could find a very rare fruit. Idun came, believing in Loki’s lies, and there she met Thjazi, but he was still in his eagle form. Idun was surprised when the eagle snatched her in its talons and flew away with her.

The eagle took Idun to his home, just as he’d hoped to do after plotting with Loki. After a while, the gods began to grow old, but they couldn’t find Idun to give them her apples. They were furious, and since they knew that Loki was the last one seen with her, they questioned him. He offered to go and get her if he could have Frigg’s (Odin’s wife) secret cloak of falcon feathers which would render one invisible.

Loki found her in Thjazi’s home, and he transferred into a nut and flew away with her all the way to Asgard. But on the way, Thjazi realized what had happened, and furious, he chased after the pair of them all the way to Asgard’s gates. The gods saw what was happening, and they created a huge fire. Loki was able to steer clear of it, but Thjazi flew through it, and his eagle form was burned to a crisp.

Idun’s symbol is mainly her youth-giving apples. But related to those, her other symbols could be things related to life, youth, and spring such as blossoms, fruits, trees, and the color gold.

Idun’s name appears in the video game “God of War,” and you can use her apples to gain health and vitality. 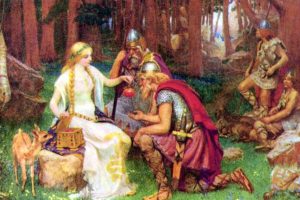 Idun is a young, beautiful goddess who is one of the most interesting in Norse mythology. Take a look at the main points that were covered in the article above.

Idun is a fascinating goddess because she holds such importance to the Norse gods, and yet we only know one story about her. It wasn’t only the gods who wanted her, but a giant took her to always have access to her youth-giving apples. It would be a strange experience for a goddess to be bandied about by other deities who were always seeking youth. But who doesn’t want the gift of eternal youth?