Tyr, god of war and battle in Norse mythology, was also a god of justice and order. He is one of the more prominent gods in the Aesir tribe of the Norse gods. Read this article to learn why this god of war lost his arm to a wolf.

Who Is Tyr in Norse Mythology? 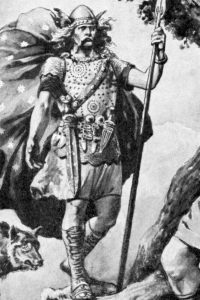 It may seem contrary that he was also a god of war. However, he was not only a Norse god but a god to many other Germanic peoples. During this time, war was a necessary part of creating order and justice. There wasn’t much difference between a god of war and a god of law and order.

Unfortunately, there isn’t much remaining about Tyr’s role in Norse and other Germanic mythology, even though his name meant “god” or “the god.” His most famous tale has to do with a wolf and how he lost his arm. It doesn’t quite sound like he was a powerful god of war, but he wore it as a badge of honor. He wanted to maintain order and justice at all costs.

There is some debate about who Tyr’s parents were. His father was either Odin, lord of all gods, living at Asgard, or the giant Hymir. There was no mention of a mother figure, but the grandmother might have been a woman or creature with 900 heads. However, most scholars believe that Tyr was Odin’s son because most of the sources claim that.

If he was one of Odin’s sons, then he had many half-siblings: Thor, Baldur, Hodr, Heimdall, Hermod, Bragi, Vidarr, Váli.

Of course, because he was a god of war, we can assume that he was a skilled warrior and very brave. According to one of the anthologies of Norse myths, Tyr was very brave and also very concerned with order and justice. He was also wise as well as confident in battle. A proverb found written in “Prose Edda” states: “He that is wisest is Týr-prudent.”

Men in battle would call upon Tyr to act as their strong aid to fight and to have courage. One could be “Tyr-valiant” as a warrior. Adding to his aura of strength, Tyr was also missing an arm due to a fight with a famed wolf.

What Are Tyr’s Symbols?

Tyr doesn’t have any distinct symbols like other gods, but perhaps one could say that the T-shaped rune is his. Before Tyr came into being with that name, the previous Germanic peoples worshipped a god named Dyeus. He was the god of the sky, and his name meant something like “daytime sky” or “Sky Father.” Many other gods were inspired by this original god, such as the Greek Zeus.

Dyeus is thought to have later evolved into who we know as Tyr, god of war, and both of them were gods who dispersed justice. This comparison is likely true, even if we’re not totally sure, because we can see that in the rune alphabet, the letter “T” remains. This T-run is named “tyr,” shaped like an arrow pointing up to the sky. Both give us clues that the letter was related to Tyr, the god of war, also the former god of the sky.

Origin: How Was Tyr Born?

There isn’t much mention of Tyr’s birth in the stories. Perhaps there are many lost tales because he held such an important role in Norse mythology, and yet we don’t know much about him or the full story of Tyr.

Myths of the God of Battle

Mention of Tyr’s tales comes from different sections of “Prose Edda.” This tale was an anthology written by the 13th-century Icelandic writer Snorri Sturluson. He has two main stories, one of which his role remains incomplete because he falls out of the story before it ends. Take a look at the legends of Tyr that remain.

– Tyr, Thor, and the Kettle of Giants

This tale is in the section of “Prose Edda” entitled “Hymiskvitha.” While this section is not exactly complete, Tyr falls out of the story even before it ends, and we don’t really know why! The story goes like this:

Thor, Tyr’s supposed half-brother, is in search of a magical kettle that can brew a lot of beer all at once. However, the kettles that could do such a thing were owned by a giant, one of the supposed fathers of Tyr, the giant Hymir.

Tyr and Thor decide to travel to Hymir’s home to steal the kettle. Luckily, Hymir didn’t appear to be home when they arrived, so they snuck inside. However, strangely, Tyr’s grandmother, the one with 900 heads, was there, and she told them to hide for a little while, just to be safe. They did so, and they made their hiding places among the giant kettles, knowing that he would never find them there if he happened to arrive.

They hid, but there was a pillar next to them, and when Hymir returned, he smashed it, jostling the kettles so that they were suddenly open to his view. However, the giant didn’t instantly try to kill them because he feared the powerful Thor. He asked them to dinner and brought three oxen to feed them. Thor ate two of them and kept one for fishing with Tyr the next day, but then after that, Tyr disappeared from the tale.

– Fenrir and Tyr, the Wolf

Now, we get to the story that Tyr is most well-known for, and that is his interaction with Fenrir. Fenrir was a giant wolf, and he was the child of Loki and a giantess. This story can be found in the section called Gylfaginning in “Prose Edda.” Fenrir was a beast that lived in Asgard, one of the nine realms of the Norse world and home of Odin.

He was so large and fearsome that no one else wanted to approach the wolf, and only Tyr was brave enough. Tyr knew that Fenrir had an important role at the end of days or Ragnarök, so the gods knew they would have to bind him. It might help to keep the end of days at bay. The gods decided to play a little game and put Fenrir in various cages and ties to see if they would work.

However, Fenrir was always better and stronger than any attempt to bind him, and he won the “game” every time. The gods decided to try a different tack.

– Tyr and a New Idea

After Fenrir escaped his last cage or tie, Tyr had an excellent idea. He said they must ask the skilled craftsmen, the Dwarves of Svartalfheim, to build fetters that Fenrir would never be able to get out of. The dwarves did so, and they called the fetters Gleipnir. Once Tyr had the fetters, the gods challenged Fenrir another time, and he agreed.

He was reluctant to put on the chains because he saw how thin and small they were, and they looked nothing like what the gods usually tried. He was very suspicious of what they were trying to do, but Tyr told him that if he put on the fetters, he would put his arm in Fenrir’s mouth, as an insurance policy that they were telling the truth. It was a bold idea, but it was a sacrifice in the end.

Fenrir agreed and allowed himself to be tied up, but he wasn’t strong enough to break the bonds. It was the first time that had ever happened, and in his fury, he bit down on Tyr’s arm, tearing it clean off. The stories vary on whether it was Tyr’s arm or hand that Fenrir bit off, but Tyr appears in artwork with either a missing hand or missing arm, so we’re not sure.

– The Aftermath of Tyr’s Sacrifice

Even though Tyr made this sacrifice to help provide order and justice, he would not live through the end of days. It was prophesied that when the gods and the giants would go to battle at the end of time, he would fight against the great wolf monster Garmr. The prophecy states that they would both kill each other. It seems like a bit of karma was at work in that prophecy, but at least Tyr had the chance to kill his enemy.

Tyr was a very prominent deity in the Norse pantheon, yet there isn’t much of him in popular media. However, he has one legacy that has remained in place for centuries, and that is the use of the word “Tuesday” or “Tyr’s Day.” The Romans linked Tyr with their own god of war, Mars, and together with the Roman and the Norse or Germanic languages, were the inspiration of the days of the week. There is some connection there, and Tyr was also important to early Roman people.

Take a look at the main points we covered in the article above: 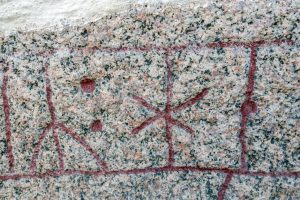 It’s so unfortunate when we come across a fascinating and extraordinary god, and there isn’t much information about him. We do know that he was a great warrior and well-respected. He was such a well-known god that he might have been descended from an earlier god and then later evolved into various other gods. As luck would have it, he is most well-known for sacrificing his arm for the cause of justice, something many gods in mythology would not be willing to do.