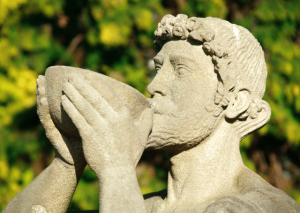 This pantheon was a mixture of Roman gods taken from the Greek pantheon with a few new Roman twists. The gods were vengeful and often violent or full of passions. They all had interesting stories to tell of curses, pain, regret, and love.

Read this article to find out even more about the ancient Roman gods and goddesses.

Jupiter is the King of the gods in Roman mythology. He is the god of the sky and thunder, and he is based on the Greek god Zeus. Jupiter was married to the goddess Juno, even though he was known for having all kinds of extramarital affairs. He had many, many children, but he had an interesting origin story himself.

His father was Saturn, born of a Titan at the beginning of time. Saturn was afraid that one of his children would overthrow him, so he swallowed his children one by one. But Jupiter’s mother saved him by tricking his father into thinking Jupiter was a rock. Saturn swallowed the rock and then threw up his other children.

Jupiter was involved in many myths in mythology. They most often involved his illicit affairs. He was totally linked with the political state of Rome, and he was consulted on all matters.

Juno is the goddess of homemaking, motherhood, marriage, and family. Also, she is both Jupiter’s sibling as well as his wife. Juno stuck by him despite all his affairs. But she was notoriously jealous and would do her best to get revenge on all his paramours. She was in control of all feminine matters, and women looked to her for blessings, guidance, and help.

She and Jupiter had four children together, but he had many children with his other lovers. In one situation, she pursued one of Jupiter’s lovers so much that when she found her, she turned her into a cow. She is the Roman version of the Greek goddess Hera.

Minerva is the goddess of wisdom, craftsmanship, intelligence, and inspiration. She was Jupiter’s daughter, but she was not Juno’s daughter. In fact, she incurred Juno’s wrath because of her very unique origin story. Jupiter raped a woman named Metis, and she became pregnant.

But because of Jupiter’s own origin story, he also feared that his child would one day overthrow him, so he swallowed Metis and her unborn child. But Metis and Minerva were not to be stopped. Together they created war gear, and it gave Jupiter a terrible headache. He asked his son Vulcan, the forger, to help him by cutting open his head.

He did so, and Minerva came out, dressed in her war attire, ready for battle. She was the goddess of Rome, the Roman version of Athena, and she was looked to for guidance. She also played a role in the origin of spiders.

Bacchus is the god of revelry, including wine and drunkenness in Roman mythology. Not only that, but he was also the bringer of wild, frenzied states such as creativity and religious fervor. In Greek, his name meant “liberator,” which made sense because of the freedom he gave to others. Bacchus gave his gift of wine and drunkenness to people, but he also taught people how to grow grapes.

He was one of Jupiter’s sons, but not Juno’s. Today, he is seen as a harmless, bearded, jolly man. But some in Ancient Rome believed that he could be the end to decorum and conservatism.

Venus was the goddess of love, beauty, and sex. Her Greek counterpart was the beautiful and very famous Aphrodite. She was always portrayed as a beautiful young woman and considered the most beautiful of the Roman gods. She was desired by many. She had many affairs even though she was married to the deformed Vulcan, god of the forge.

However, their marriage was an unhappy one, and one of her greatest affairs was with Mars, the god of war. She had a strange origin story. She was technically born from her father’s genitals and the sea because his genitals were tossed into the sea.

Neptune was the god of the sea, and he was one of Jupiter’s brothers. Not only that, but he was also the controller of winds as well as horses. He was oddly the patron of horse racing, and he traveled across the ocean with a chariot and horses. He was the Roman version of the Greek god Poseidon.

He lived in a golden castle at the bottom of the Mediterranean. He had the power of the sea at his command. But he was also in charge of the fortunes of those who made their money from the sea. 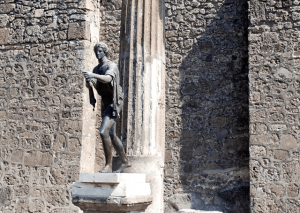 Mercury was the god of commerce, and he was also a wily trickster god. He was the patron of thieves, merchants, and those who carried messages. In addition, Mercury was a psychopomp and could help transport souls to the underworld. Despite his boyish, ridiculous nature, he was really in charge of all the information that moved around.

He was another of Jupiter’s children and not one of Juno’s. He was one of the gods who had an affair with Venus, and together they had a child named Hermaphroditos.

Vulcan was the god of the fire and the forge. He was one of Juno and Jupiter’s sons, but sadly he was born so ugly that Juno threw him over the side of Mount Etna. Because of this, he became deformed. But he grew up underneath the mountain, and that was where he created his forge.

One day, he created a chair that trapped his mother. Every time she struggled, it only held her tighter. It was all for revenge, and he told his father that he would let her go if Jupiter would give Venus in marriage to him. Jupiter agreed, and Venus and Vulcan were united in marriage, even if they ended unhappily.

Ceres is the goddess of fertility and agriculture. She is also one of Saturn’s children, and she was the patron of farmers and the plebeians. She is the Roman version of the Greek goddess Demeter. She was the goddess in charge of the harvest, and people would worship her to ensure a good harvest for the year.

Her most famous story is that of her daughter Proserpina, or Persephone in Greek mythology. Proserpina was taken hostage by Pluto and taken to the underworld. That’s why each year, Ceres stops growth during winter while her daughter is away. In the spring, when the growth starts again, it is when Proserpina is visiting her mother.

Mars is the Roman god of war as well as passion, anger, and violence. Additionally, he was the father of Remus and Romulus, the founders of Rome. He was based on the Greek god of war named Ares. He was one of the children of Juno and Jupiter, and many others desired him.
He had many affairs, and one of the goddesses he had an affair with was Venus, the goddess of love.

Diana is the Roman goddess of the hunt as well as a protector of animals. She was one of Jupiter’s children, and her twin was Apollo, the god of poetry and music. She actually helped her mother give birth to her brother because Juno banished the mother.

Diana preferred to be alone and kept to her home in the forests. She was also one of the goddesses who was a virgin even though many of the gods desired her. She would roam the forests hunting, carrying her bow and arrows.

Pluto is the Roman god of the dead and ruler of the underworld. In fact, he was the ruler of the entire underground. He was one of Saturn’s children, and once the children overthrew the father, they split the world up into various areas, and this was Pluto’s domain. He is the exact copy of the Greek god Hades.

Pluto, feeling lonely, kidnapped Proserpina when he saw her dancing one day. He took her to the underworld but eventually made a compromise with her parents. He would allow Proserpina to come up to the surface for half the year.

Vesta is the goddess of hearth and home. Her symbol was fire because, in her temple, a fire was always kept alight. She was a virgin goddess. But she was also a goddess of all the domestic activities of the house and the rearing of children. She was one of the most important goddesses in the Roman pantheon.

A weeklong festival was held in her name each year. It was called Vestalia. Women would make offerings at her temple, and only women were allowed in her temple. 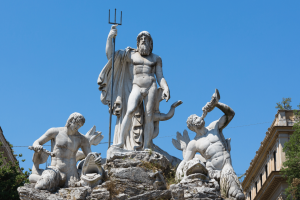