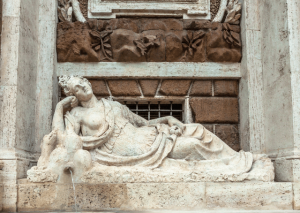 Diana, goddess of the hunt in Roman mythology, is one of the daughters of Jupiter. She is also the goddess of the moon, chastity, and fertility. Portrayed as young and beautiful, she is a virgin goddess, and her Greek equivalent is Artemis.

This article will tell all about Diana, her beginnings, and her life in mythology as a virgin goddess.

Who is Diana in Roman Mythology?

Diana is the Roman hunting goddess. Her name means “to shine” or “give off light”. She was born of Jupiter and the goddess Latona on the Isle of Delos. She is also the goddess of the moon, chastity, animals, and women seeking to have children.

The Romans considered her to be the goddess of three main parts: the hunt, the moon, and the underworld. She was a “triple goddess”. Her links to the underworld were because they thought her to be most prevalent at crossroads.

The myths portray her as a young, beautiful woman who had a strong temper. She was proud of her virginity and strove to defend it. Many came to her hoping to be suitors or lovers, but she got rid of them all. She was the symbol of a free and independent woman. She kept to herself most of the time. She preferred the forests and to live among animals. She also made companions of the mystical creatures that lived there.

She was added to the Roman pantheon of gods around the 6th century BC. She forms a triumvirate with two others: Virbius, a woodland god, an Egeris, a water nymph. These were her most common companions. Diana was worshipped by all classes and genders. Her power extended beyond the Roman Empire. She was beloved by all and had a place in the Dii Consentes, the 12 main gods of the Roman pantheon.

The Many Names of Diana

As the goddess of hunting, she is depicted wearing hunter’s garb, such as a leather tunic, and standing with animals or plants. She was said to have resided in a sacred cluster of trees on the shore of Lake Nemi. This was where the people often worshipped her.

The Beginnings of Diana, the Roman Goddess of the Hunt

Diana inherited the history of the Greek goddess Artemis with a few additions. Diana was born on an island along with her twin brother, Apollo. Her father was Jupiter, and her mother was Latona. Latona was a minor goddess, born from Titans.

Latona and Jupiter fell in love with each other and got married, but the marriage was fleeting. Jupiter soon left in search of another conquest. Jupiter was known for his flirtations and flings with both goddesses and mortals. It is well-known that Jupiter’s wife, Juno, was also a jealous woman who hated her rivals for her husband’s affection.

She would do anything to punish Jupiter and the women he chose for his dalliances. Juno found out about Latona’s pregnancy, and she worked to find a way to get rid of the child and the woman.

She asked a sea creature named Python to search out Latona and kill her. As happens in many other myths, Apollo warned his mother about it from the womb. He told her where she could find shelter on the island to keep safe from Juno and Python.

How was Diana Born?

Latona found a haven for safety, but the birth began. Python couldn’t find her, and Juno wanted to punish her further. Juno imprisoned the goddess of childbirth, Lucina. So, Latona had to suffer for days on her own, trying to bear her two children. There were nymphs who could hear her cries of pain, and they came to help her.

Thankfully, the children were born, Diana coming first. Once Diana was out of the womb, she helped her mother deliver Apollo. That is the reason she’s the goddess and protector of childbirth and midwifery.

Apollo came out wearing white, holding a sword. Both of them were naturally skilled with a bow and arrow. Apollo and Diana were skilled in battle from the beginning, tied to each other, and tied to their mother. Together, they hunted for Python and killed him. United, they avenged their mother’s struggle to birth them. Interestingly enough, Diana was the goddess of the moon, and Apollo was the god of the sun.

Protecting Her Chastity: Myth of Diana, the Virgin Goddess 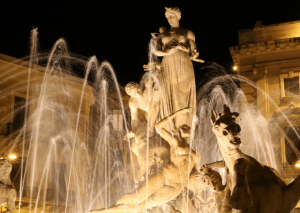 Diana was a fierce huntress. She wandered on her own over the world, but she enjoyed dwelling in secret, hidden away places. As with other Roman gods, Diana’s stories were written down by Ovid, the famous Roman poet. Ovid wrote her story about her and Actaeon in his narrative poem, Metamorphoses.

After a hunt, it was Diana’s custom to bathe in a river or pond. Actaeon was a skilled hunter, and he was wandering the woods with his pack of hounds, looking for stags. But it was a hot day, and so he took the dogs to drink from a creek. But there, he found Diana, nude, bathing in the cool waters.

He surprised her, and she grabbed her bow to shoot him through with an arrow. The myths state that she was fiercely protective of her virginity. So, she spurned all suitors and lovers. She wanted to shoot him, but instead of shooting him, she splashed water on him. This water had powers, and it turned Actaeon into a stag as punishment for seeing her naked body. His hounds chased him, devouring him into pieces. Diana performed her punishment to its full extent.

Worship of the Hunting Goddess

She was thought to reside in a sacred grove of trees on the shores of Lake Nemi. It is not too far from Rome. It was there that the people would make sacrifices to her. This aspect of the goddess was called Diana Nemorensis, “Diana of the woods of Nemi”.

Diana also had a temple at Aventine Hill. Her festival celebration was called Nemoralia. It began at Nemi but moved throughout the city, and it was three days and night. Those who wished to sacrifice to her would carry torches into the woods. They would also leave little tokens in the areas where her spirit would live.

Interestingly, Diana’s legacy lived on. Even with the adoption of Christianity, she remained an important goddess. Those who retained these beliefs were called the “Society of Diana”. It was especially the plebeians who retained their old beliefs linked to her. She was the only pagan goddess mentioned in the New Testament, specifically Acts 19.

The story follows the decision of religious craftsmen. They would make relics and worship materials for believers of Diana. But now that Christianity was spreading in Rome, they needed to decide what to do. They couldn’t decide which would help their business more. They wondered if they should join the Christian world of craftsmanship or keep to their old ways.

Diana, the Hunting Goddess in Art

Diana is depicted in art wearing hunting gear. She wears a cloak and boots as well as a belt. Some of her pieces were typically worn by men at the time. She also carries a bow and arrow and is often depicted with animals.

Diana was often painted during the 18th-20th century. She is shown with a forest, plants, animals, as well as her hunting gear. Sometimes she was painted as Apollo to show their great connection as siblings and twins.

Because of her connection to the moon, she was also painted or sculpted with the moon. Statues of her would display her link to hunting and animals. They portrayed her strength as an independent woman.

Diana’s most prominent symbol was her bow and quiver of arrows. The most common animal that she was pictured with was hunting dogs. And, of course, the moon was her constant companion in art.

One can still find the Roman goddess Diana still being worshipped today. In Wicca and Dianic Wicca, she plays a major role. Just like she always was, she is portrayed as a nature goddess, full of wisdom, patron of new life, and fertility.

In today’s world, many of us can relate to the freedom and hopes of an independent, strong-willed woman. Her world was controlled by men, especially men who would take a woman against her will. But Diana remained strong.

We can see her legacy throughout the types of women we see in media today. Women who fight for what they believe in, no matter the cost. For example, Katniss Everdeen from the Hunger Games is an excellent example of a Diana figure.

She is well-versed in archery and the ways of nature and life in the woods. She also was a strong, independent woman who didn’t give in to others and fought for what she cared about. Diana still lives on in the modern world, and we can see it every day.

Take a look at the main facts about the goddess Diana:

Diana is a beautiful, virginal, powerful, independent goddess. She was a symbol for the Roman people in terms of nature, hunting, and chastity. Right from the beginning, her focus was not on herself. She was the firstborn, and she aided her mother in delivering her twin brother. She was strong, confident, and independent.

Once her mother was safely through the delivery, she and her brother grew to be powerful warriors. They were both skilled with a bow and arrow. They fought for each other and were completely devoted to one another. Together they sought out the creature who had been commanded to find their mother. Together, they killed Python. At the same time, they avenged all the pain their mother went through in birthing them.

Diana is the representation of strength and loyalty. She fights for those she loves, remains loyal, and goes her own way, living as she pleases. It’s not a surprise that her legacy lived on beyond the adoption of Christianity by the Romans.

She was the representation of freedom, nature, health, and vitality. Even though she resides in current Wiccan religions, she can apply to anyone. Women, especially, could be drawn by her fierce temper, independence, and power. She lived a life without a lover, without children, and went her own way. Any woman who goes the same path could find strength in Diana’s footsteps.