Mars: The Powerful God of War 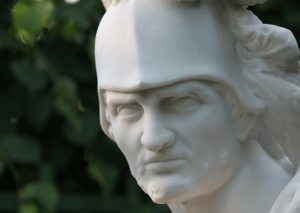 Mars, god of war, is the famed son of Jupiter and Juno, and his Greek equivalent is Ares. He is known for his courage and victory in battle.

This article will tell you all you need to know about Mars, his origins, his myths, and all his intrigues in between.

Who is Mars in Roman Mythology?

Mars in mythology was more revered and respected for his part in the Roman pantheon. And not only was he known as a god of war, but also for success in battle, which would bring about peace for the Romans. In battle, the warriors would raise their spears and call out, “Mars Vigila!” which means, “Mars, wake up!”

He was often offered sacrifices before battle. He was accompanied on the battlefield by his sister Bellona. She was the goddess of war, and throughout the myths, she floated between his wife, cousin, and daughter.

Mars, together with Jupiter and Quirinus, created the Archaic Triad. They helped to control the Roman state and its military movements. Quirinus was the ‘god’ version of Romulus, one of Mars’ children and one of the mythical founders of Rome. Later, Mars was replaced in this triad by his half-sister, Minerva.

At the beginning of Roman history, Mars was more connected to nature and the protection of cattle. Later, he morphed into a god more like Ares. As Rome became more warlike and started to acquire more lands, Mars also became more linked to war.

The Roman God of Many Names

Like other Roman gods, Mars went by many epithets. Each represented a different aspect of his power.

How was Mars Born?

While many of the myths claim that Mars was born of Jupiter and Juno, there is another story. Juno was famously jealous of Jupiter’s affairs as well as her ability as a mother. Minerva, one of the children from Jupiter’s affairs, was swallowed along with her mother. Jupiter swallowed them to hide his indiscretion from Juno.

He swallowed Minerva while she was still in utero. But she figured out a way to burst out of Jupiter’s forehead and be born without need for a mother. This infuriated Juno since she was both the goddess of motherhood and childbirth. In revenge, the stories state that she went to find a particular, powerful flower. She asked the goddess of flowers, Flora, to assist her.

The goddess told her that there was a special flower that helped women to have children without the use of a man. Juno tested it on a heifer, and the heifer had a calf right away. She used it on herself and bore Mars.

Tales of the God of War: Mars’ Myths 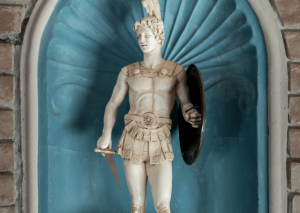 Most of our information about Mars comes from the Roman poet Ovid. Like his father Jupiter, Mars was a philanderer and wanted by many women. He had many liaisons with other goddesses, and one of his most famous ones was with the goddess of love, Venus. She was married to his brother Vulcan, but she and Mars had a long-lasting affair.

One day, Vulcan decided to play a trick on them. He made a net in his workshop and created a trap on his bed. The next time that Mars and Venus made love, they were trapped in the net and couldn’t move. Vulcan brought other gods to come and laugh at the naked, trapped lovers.

He also fell in love with his half-sister, Minerva. She was the goddess of wisdom as well as the Roman state, and she desired to remain a virgin. But he thought that he could convince her to fall in love with him too. The goddess of time, Anna Perenna, offered to help him, but secretly she had feelings for Mars.

To trick him into marrying her, she disguised herself as Minerva, and he agreed. He later found out that he was tricked into marriage and was furious.

Aeneas, the son of Venus, and his men arrived in Italy, and they built a community that would later become Rome. One of the kings of this area was called King Numitor. He was a good king, but he was overthrown by his evil brother, Amulius.

As punishment, Amulius forced Numitor’s daughter to hide away and become a Vestal Virgin. He wanted to cut off her father’s line. Her name was Rhea Silvia.

Mars had other plans. It’s unclear whether or not he desired Rhea, or if he wanted the line to continue, but he crept into her room and raped her. While she was sleeping, she had a dream that she planted seeds. These seeds became two trees. Over time, the trees grew so large and tall that they covered the whole world. In the morning, she realized that she was with twins.

Amulius heard about this deception, and he ordered the children’s death as soon as they were born. But the man who was sent to execute her took pity on the children. He set them free, down the Tiber River in a basket. Once they reached a certain place on the back, a wolf nursed them. Later, a herdsman and his wife reared the two boys. So, Mars was to be thanked for helping bring about the founding of Rome.

The Roman God of War’s Progeny

Throughout all his affairs, he had multiple children:

Ares vs. Mars: What’s the Difference?

There are a few slight differences between Ares and Mars. This often happened, as the Romans absorbed the Greek myths into their religion. Ares, in Greek mythology, was seen as more an evil Roman god: fearsome, bloodthirsty, and focused on death. He was also often attributed to battle failure as well as success.

Mars was more respectable, focused on battle strategy as opposed to killing. He was also seen as more logical and level-headed than the wild, crazed Ares. Ares was a little bit stricter and vicious in his demeanor, while Mars was full of virtue.

Ares was the god of conflicts that destroyed people and cities. Mars was the source of peace and battles that brought victory and positive things to Rome.

Festivals of the Cult of Mars

The festivals were celebrated on:

There was a Temple of Mars Ultor built just outside Rome. He also had an altar in Campus Martius, a section of Rome named for him. This was where soldiers trained and practiced for battles. There was another at Porta Capena.

In art, Mars was represented similarly to Ares. But he could be shown as an older or younger man, depending on the artist. He might wear weapons and the clothing of war, but he was often depicted in the nude. The represented the great power he had. Nakedness in battle showed that he had no fear.

One of the most famous depictions of Mars is a painting by Jacques-Louis David in 1771, called Minerva Fighting Mars. In it, Minerva is standing, and Mars is on the ground in his clothing of war. They are meant to be warring against one another. There are dead bodies around them as if they are on a battlefield.

It shows Minerva as the victor between them. Perhaps this represents her eventual takeover of Mars’ place in the Archaic Triad. This oil painting now hangs in the Louvre.

The Legacy of Mars: Pop Culture

Mars has given his name to both the month of March and the planet. Mars is the fourth planet from the sun. In astrology, the planet is linked to aggression, combat, and traditional male qualities.

While the Greek god Ares is often shown or represented in media, Mars doesn’t get the same exposure. This could be because of the higher interest in Greek mythology as opposed to Roman.

Here is a summary of what information the article covered:

Mars is one of the most powerful gods in the Roman pantheon. But he has earned his place in the Dii Consentus, or 12 main gods. His long lover, Venus, was the mother of Aeneas, who helped to found Rome. And, he had children with the sister of the King of the area Aeneas founded. The twin boys she bore helped to found Rome.

The Romans believed that Mars was their protector in all ways. At first in early Roman history, he was the god of agriculture, protecting the crops as they grew to fruition. Once Rome grew in power, and its changes controlled by their victories in battle, he became more like Ares.

Strangely, the Romans made their god of war a little softer than the militant Ares in Greek mythology. Even though he was the famous god of war, powerful and courageous, he was also seen as virtuous. He was not linked with bloodlust but rather with victory and resulting peace.

Juno might have had Mars on her own, but Jupiter seemed to have no trouble sharing his power. He shared some status and power with Mars as they were the Archaic Triad. They helped to rule over Rome, and Mars was the one who helped to protect it.

Like his father, he engaged in many dalliances and affairs. Even though he married eventually, it seemed he loved Venus and Minerva the most. Minerva, his half-sister, rejected his amorous advances. She later took his position in the Archaic Triad.

Mars’ legacy remains in both the planet and the month that keeps his name. However, even though he was second only to his father, it seems his popularity dwindled. People don’t seem to remember Mars as much as other gods and goddesses like Venus, Cupid, and Pluto.

But for a time, he reigned supreme in the Roman state. He was sacrificed to and called upon during times of both war and peace. And the warriors would call out to him on the precipice of battle, asking him to “wake up!” What if all the gods were just lying dormant after they faded out of hearts and minds? Maybe they’re just waiting for that special day when the people of Rome call out, “wake up!” once more.