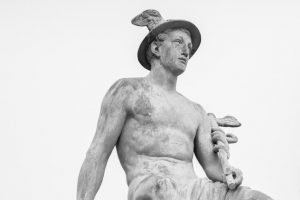 Mercury, god of commerce, is the Roman messenger god. He was the son of Jupiter, and he would help deliver messages between the gods. He was also the god of merchants, communication, thieves, and messages. Known for his tricks and wily ways, Mercury was the only other god who could travel to the underworld, and this article will detail his interesting tales.

Who Is Mercury in Roman Mythology?

Mercury is the Roman messenger god, the Roman equivalent of Hermes. He was in charge of sending and delivering messages between the gods. He was also the god of communication, commerce, merchants, shopkeepers, and even thieves. He was the representation of movement and the spread of information, and so he held great power.

He flew in order to send messages, so he wore a winged helmet and winged shoes to travel. Vulcan, his half-brother, who is the god of the forge and fire, is the one who fashioned his metal helmet for him.

Mercury would also carry a staff wound with serpents. He traveled around, not only sending information but gathering information too, and sometimes getting himself into trouble.

Both Hermes and Mercury are known for their wily ways. If Mercury had all the information, he could certainly use it to his own advantage. Unlike other gods, he was quite amorous and had many lovers, both male and female. He entered Roman mythology quite late, around the third century BC, but he was still quite well-known and remembered.

What’s in a Name?: Mercury’s Etymology

All of these word roots are appropriate for this god. Mercury was involved with trade and merchandise as well as boundaries. He moved between gods, and he moved between worlds. He also broke boundaries in the way he lived. He was rather devious, full of tricks, and shown as young and often nude in artworks.

How Was Mercury Born: The Origin of Mercury

Mercury was the son of Jupiter and a water nymph named Maia. This was just one more of his father’s extramarital affairs. He had many other famous half-siblings, such as Vulcan, the god of the forge. His other half-siblings were Minerva, the goddess of wisdom, and Proserpina, Ceres’ daughter.

However, because he came so late in the Roman mythology story, he doesn’t have a proper origin myth like the other gods. There is only a basic record of how he came into being, and then the rest of his stories begin.

Mercury Myths: Tales of the Trickster

Since Mercury is moving between the gods and around the earth, he was part of many stories. He liked to get himself into trouble and trick and tease. Some of his tales came from Ovid and his collection of stories, “Metamorphosis” and “Fasti.”

– The Roman God of Thieves and the Peasant 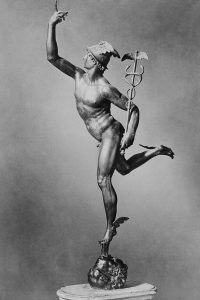 One day, Mercury stole a herd of cattle. He hid them away in a nearby forest, but there was a peasant named Battus who saw him.

Mercury found the peasant and told him he must not tell anyone about what he saw. To test the peasant, Mercury turned himself into another man and went to Battus to ask about the cattle.

This transformed Mercury offered Battus a couple of cows if he told him what had happened to the cattle. Battus agreed and told the man what Mercury had done.

As punishment, Mercury turned the peasant to stone.

In a similar story, Mercury stole cattle again. This seems to be his trick of choice, but this time, the cattle belonged to Apollo. Apollo complained to Jupiter and asked him to deal with his son and get the cattle back. But while Apollo was arguing to get his cattle back, he noticed that Mercury was carrying something strange.

It was a lyre, a musical instrument made from a tortoiseshell by Mercury himself. Apollo was enchanted by the instrument. He said that Mercury could keep the cattle if he would only give Apollo the lyre. Mercury agreed, and Apollo eventually became a master of the lyre and also became identified with this instrument.

Juno was known to be quite jealous of her husband’s paramours, and on one occasion, Mercury helped one of his father’s lovers escape. Jupiter had fallen in love with Io, and they had a child together. In order to keep Io safe from Juno’s wrath, he turned her into a cow to hide her. Juno called upon a monster named Argos who had a hundred eyes to search her out.

Mercury put his tricks to full use, and he played his lyre and told stories to lull Argus to sleep. Once the monster was asleep, Mercury killed him, and then he could help Io flee to safety. Juno was furious, and once again, Jupiter’s lovers ran free from her wrath.

One of Mercury’s talents was the ability to pass into the underworld. Besides his uncle Pluto, he was the only other god who could do this. After Pluto abducted Proserpina, her mother had no idea where she went. She searched the earth and even asked her brother Jupiter for help.

Mercury, however, went to the underworld and found her. He told Jupiter where Prosperina was, and Jupiter confronted his brother. Mercury thus helped reunite Proserpina with her mother. However, the reuniting was short-lived. Pluto made a condition that Proserpina could return to the world if she hadn’t eaten anything from the underworld.

She had, and so it was later decided that Proserpina could only spend half the year out of the underworld. Mercury lent his hand again. Each time Prosperina was to return to the world or to return to the underworld, he would be the one to take her back and forth. Not only could he travel between worlds, but it was thought that he was able to transport dead souls as well as Proserpina.

Mercury had a wife named Larunda. There are very few stories involving her, and one of them was that Mercury was assigned to take her to the underworld. But along the way, they fell in love, and he made love to her. They had two children whose collective name was the Lares.

The other story states that she was a nymph who had her tongue cut out by Jupiter. They got married, but it doesn’t come as a surprise that Mercury wasn’t always faithful. He had many lovers, male and female. Out of all his lovers, there were two that were really popular.

First was his male lover Perseus who killed Medusa. That is the tale from Greek mythology. Mercury’s other famous lover was Venus. Together they had the child Hermaphroditus. This man would merge his body with his female lovers so that the one being had both male and female genitals.

This god was often seen as a rule-breaker or a boundary-basher. He was young, often shown nude, and painted or sculpted with his winged shoes and winged helmet. He might sometimes be carrying his herald’s staff which is intertwined with serpents.

Some animals that would be with him in the artwork on occasion would be the rooster, the tortoise, the ram, or the goat. The tortoise represented his creation of the lyre, and the rooster is the animal that hails the day.

Worship and Temples of Mercury

He came late, but he was a very important and well-respected god. He had one temple in Rome, and it was in the Circus Maximus. He didn’t have a priest dedicated to him, but there was a festival celebrating this god each year.

This festival was called Mercuralia, and it began on May 15. Because he was the patron of merchants, it was merchants who put water from Mercury’s sacred well on his head during this festival.

The Messenger God: His Legacy

Even though he arrived a lot later in their mythology, Mercury is still well-known today. In fact, he is probably one of the most well-known Roman gods. First of all, Mercury’s name will stay forever as the name for the closest planet to the sun.

His name has been given to countless other things. There is the chemical element and NASA’s first manned space program. Ford also has a Mercury car line. And Flash from DC comics is reminiscent of Mercury as he has wings painted on his uniform, and he’s super fast. 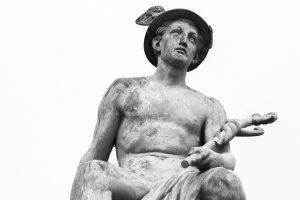 Mercury was a young, boyish, trickster god who perhaps made things a little bit more exciting in Roman mythology. Here are all the main points about Mercury, the Wily Trickster God:

Mercury was young, wild, and not unlike his father. He had various lovers and engaged in all sorts of trickery.

He was the kind of god who never seemed to grow up and yet he held enormous power. Not only did he send messages and be in charge of the spread of information, but he also could move between worlds. Perhaps we still think of him today because of our ability to spread information even faster; there is no longer a need for a winged messenger and yet he was where it all began.