Vesta: Goddess of Hearth and Home 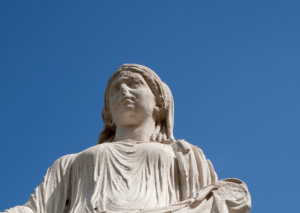 Vesta, goddess of hearth and home, presided over domestic life and domestic tranquility. She was the goddess of family life, marriage, raising of children, and of course, the hearth. She was one of the most important goddesses in the Roman pantheon.

This article will detail her story and all the aspects that made up the domestic goddess.

Who is Vesta in Roman Mythology?

Vesta is the Roman goddess of hearth and home. In ancient Rome, as well as in other cultures, the hearth was the center of home life. It was the heart, the place where food was made, as well as the warm center of the home. It was an honor to have been named a goddess of such an important aspect of Roman life.

The Latin word for ‘hearth’ is ‘focus’. In English, we have changed that word to mean a center of interest. The hearth was the focal point of the home and thus Vesta’s importance was indeed sacred. Ovid wrote, “Vesta is the same as the earth, both have the perennial fire: the Earth and the sacred Fire are both symbolic of home.”

Vesta was a virgin goddess, and her Greek equivalent was the goddess Hestia. Other goddesses in the Roman pantheon were also virgins. But Vesta was considered the purest. Her priestesses were called the Vestal Virgins, and they had to remain celibate to stay pure. However, she was often addressed as a mother figure, and she lent her hand in the area of fertility.

She was the patron of those involved with domestic-like duties, such as bakers and millers. Men were not allowed access to her temples, and so she was especially beloved and worshipped by women. She remained pure and virginal. So, she was not involved with the more popular and lurid tales of mythology.

The Beginnings of the Domestic Goddess

Vesta was actually the firstborn of the gods Saturn and Ops. Her siblings were Jupiter, Juno, Neptune, Pluto, and Ceres. However, because of her father’s fear, she became the youngest sibling.

How was Vesta Born?

At the beginning of time, Saturn had overthrown his own father, Caelus, to take over the cosmos. Then, when his wife became pregnant, Saturn worried that one of his children would do the same to him. To avoid this, he decided to swallow his children as soon as they left the womb. He did so, but Ops hid Jupiter and had Saturn eat a rock that looked like a baby instead.

Jupiter was the youngest but became the oldest and the king of the gods. Vesta was the eldest but then became the youngest, so she was considered both. Together, the siblings overthrew their father. They also took different parts of the cosmos to rule over.

Myths of Vesta: Stories of a Goddess

Vesta was a beautiful goddess. Men desired her, especially Apollo and Neptune. And yet, she didn’t want that sort of ‘domesticity’ for herself. She spurned their advances, and she made a request to Jupiter.

She asked that he allow her to remain a virgin forever. He did so, and then Vesta set to taking care of Jupiter’s hearth and home, hence her godly domain. She had no lovers in her time, and according to myth, she had no children.

Ovid wrote a story about Vesta and her close call in losing her virginity. He wrote it in his poem, Fasti. The story goes that the goddess Cybele, a mother goddess, hosted a party. She invited all the gods and goddesses. During that time, everyone became full of food and drunk wine. One of the gods there was called Silenus. He had traveled there on a donkey, and he got too drunk that he forgot to tie up the donkey.

Vesta was very tired after all the merrymaking. She went outside for a rest and laid down near the donkey. A god named Priapus, who was a nature god, crept outside and he saw her there. She was so beautiful, and he was known to be very leery. He wanted to take her for himself. As he crept forward, the donkey began to bray.

It woke Vesta, and she called out for the gods to help her. They came, and they scared Priapus away. He was never again allowed at another party. Vesta could retain her chastity.

Vesta and the Phallus: A Contradiction 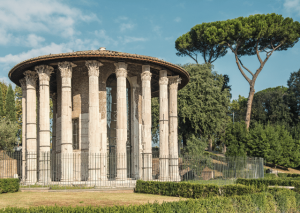 Vestal was a virgin goddess, loving of her chastity and very protective of it. But there are a few tales connected with her and the symbol of a phallus. One such tale involves the King of Alba Longa. That was the community that Aeneas founded after he arrived on Italian shores. It would later become connected to the founding of Rome. This tale is a different version of the birth of Remus and Romulus, eventual founders of Rome.

King Tarchetius saw a phallus one day appear in his hearth. Confused and surprised by this, the king went to visit an oracle, wondering what it all meant. The oracle told him that a virgin must have intercourse with that phallus. He requested it of his daughters, but they refused. In their place, they sent a handmaiden.

He was angry and wanted to kill her, but in a dream, Vesta told him he should not. So, the handmaid had intercourse with the phallus, and she bore twins. The king gave the twins to his second-in-command and told him to kill them. This is where the story returns to the original tale. The man took the twins to the Tiber River and left them there. After that, a she-wolf came to feed them until a man took them home and raised them with his wife.

The Myth of King Servius Tullius

Another example of the phallic symbol and Vesta is the conception of Servius Tullius. A Greek historian named Dionysius of Halicarnassus kept a record of this story. One day, a phallus appeared in a hearth of Vesta in the palace. A handmaiden named Ocresia saw it first.

The current king heard about it, but his advisor told him that a woman must have intercourse with it. If she did, her children would be stronger and superior to other human children. Ocresia chose to do so. After, she conceived Servius Tullius.

Plutarch also had a version of the various tales of Vesta. In those, he mentions that those conceived from the hearth phallus had special powers. They had some control over fire and were unaffected by it.

Worship of Vesta, the Goddess of Hearth and Home

The temple of Vesta is in the Roman Forum and is near the House of Vestal Virgins, Vesta’s priestesses. While other temples had statues, Vesta’s temple had a hearth. The Vestals had to keep the fire going at all times. It could never be put out. If it went out for whatever reason, it would have to be relit using a sacred tree, such as oak.

The temple housed the sacred fire of Vesta as well as the Palladium, which was a very old cult image, linked to Troy. It was very precious to the Romans. It was also valuable to other civilizations that might come to destroy the city. When the Romans were afraid of being attacked, the Vestals would bury the image.

The Vestal Virgins were women from the high class of Rome. They had to take a vow of chastity, which if they broke, would be punished by death. They might be buried alive in the Field of Wickedness. The vow would last for thirty years.

The Vestals had to not only keep the fire going, but also had to mix a brine solution that would go on the mola salsa. This was a salt and flour mixture that would be put on the animals used for sacrifice.

Vesta had a main festival called Vestalia between the 7th and 15th of June. On the first day, her temple was opened. Women could come and make sacrifices to her. This was the only time of the year which the temple would open to the public (but only women).

Women, especially mothers, could come, offer sacrifices, and ask for blessings. Because the donkey was Vesta’s symbol, they would select a donkey. They would put garlands of flowers around its neck. On the final day of the festival, the temple closed and was purified.

In art, Vesta was portrayed as a young beautiful woman. She wore long robes, and often covered her head. She was also often pictured with some form of a flame. She didn’t have many myths attributed to her, except those written by Ovid. So, there isn’t as much artwork of this goddess as others in the Roman pantheon.

Vesta had many symbols. She was related to all things in domestic life. So, her symbols were the millstone, related to the miller, where one ground wheat for flour. She was also linked to the symbol of the kettle, which would heat on the hearth in the home.

Because the donkey saved her in the story of Priapus, the donkey was a consecrated animal for Vesta. The donkey was also used to pull the millstone in the mill, so that is another connection. And of course, her symbol was the eternal flame that must never be put out. Vesta was the goddess of the heart of the home.

Here is the sum up of all the topics the article covered:

Vesta was a proud and strong goddess who took her duties seriously. She wanted to be the protector of all that had to do with home life, even if she didn’t want that same type of life for herself. She was a representation of the strong independent woman as well as celibate. In that way, she was like Diana, the hunting goddess.

It could be stated that she was not so interesting since she didn’t play a major role in the Roman mythology story. But perhaps that made her smart. She didn’t sleep around with as many people as possible, causing problems like Jupiter.

She was content to remain at home and live a solitary life of peace. Despite her lack of mythology, the Romans still revered her greatly. They made her one of the Dii Consentes, the 12 main gods of the Pantheon. Not only that but she was given jurisdiction over the center or ‘focus’ of the home: the hearth. Fire was key to survival, and she was given the honor of its power.