Home norse Cycle of the Ring

In Germanic myths, the most important narratives were the legend in the Nibelungen cycle or the Cycle of the Ring, which can be found in Scandinavian (Norse) and German literatures. It centred on the hero Sigurd/Siegfried and the Burgundian family. Though both the Norse and German works has common themes, they were different in many ways.

In the Cycle of the Ring, I will provide some background information about the Volsunga Saga, the Nibelungenlied and other Nibelungen tales.

Please note that I have retold in full, the episode of Helgi son of Sigmund that is found in the Volsunga Saga and 2 poems from the Poetic Edda, in a new and separate page called The Two Helgi.

Below is the buttons or links to the background and to the pages containing the tales of the Volsunga Saga and the Nibelungenlied. 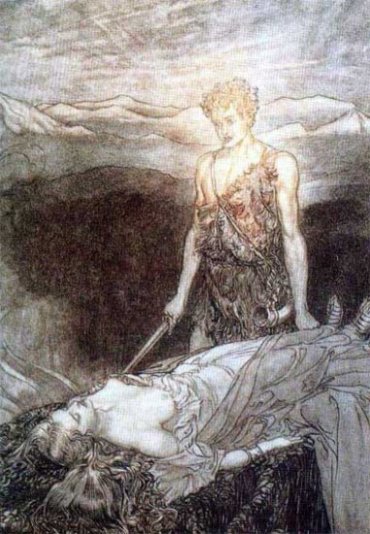