Aztec Gods: Deities of the Aztecs 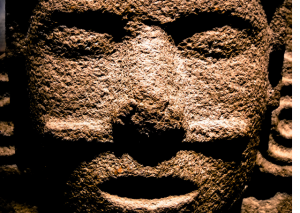 The Aztec gods were part of the religion of the indigenous people of Mexico. The Aztec people flourished between 1300 and 1521 when the Spanish took over. Their faith was fraught with unique myths, vengeful gods, and human sacrifices.

In their pantheon, they had around 13 main Aztec deities, and some were similar to Mayan gods, and you can read more in this article.

Ometeotl, or Ōmeteōtl, was the Aztec god of duality. It was one god made up of a female form and a male form: Ometecuhtli and Omecihuatl. Also, Ometeotl was the first god and one of the ancient Aztec gods. They created themselves at the beginning of time.

It was from them that all other life on earth sprung. Their children were Xipe Totec, Quetzalcoatl, Huitzilopochtli, and Tezcatlipoca. They would become the rulers of various parts of the world. Ometeotl’s story ends there, and there isn’t much discussion of this dual god because he rules on high from his place in the Aztec’s 13th heaven.

Ometeotl is both the mother and father of the universe. Their name was included in prayers and ceremonies as the origin of life.

Quetzalcoatl is also called the Feathered Serpent. He is also the sun god in Aztec mythology and is one of the most important gods in the pantheon. Not only was he important in Aztec mythology, but he was also a central figure in other religions in Central Mexico. Quetzalcoatl was one of the four major creation gods, along with his three brothers.

Huitzilopochtli was also one of the four major creation deities in the Aztec religion. He was the god of war, the sun, and the founder of Tenochtitlan, the main Aztec city. Individuals worshipped this god before and after battles to help ensure victory. The people also would make human sacrifices to him during special seasons.

They believed that blood would appease him. There is some variation in the myths. According to most myths, Huitzilopochtli was one of the sons of the creator god, Ometeotl. As one of the creation gods, he helped start the world with his brothers.

He eventually led the Aztec people to their true home in Tenochtitlan.

Tezcatlipoca was called “the Smoking Mirror” in the language of the Aztecs. He was the god of wind, death, the sky, and he was also named the jaguar god. He was known as an unkind god, very competitive, and enjoying violence. He had a lot of competition with his brothers, especially Quetzalcoatl.

Together, they defeated the monster Cipactli to start the world. Tezcatlipoca even gave one of his feet to lure the beast in so that they could kill it. He is often portrayed with only one foot in many of his images. Because of his sacrifice, this was a god that the people would also sacrifice humans to.

Tlaloc was the Aztec rain god, and he was well-known to the people in Central America, not just the Aztecs. He was a very important god to the Aztec people. He was loved and worshipped for the life-giving water he would provide for the crops. However, this god was also a dangerous one if he was unhappy.

The people associated him with diseases such as leprosy and rheumatism. Tlaloc controlled the rain, and he worked in tandem with the other weather gods. He was worshipped in major festivals throughout the Aztec year. He had a massive temple in the Aztec central city. 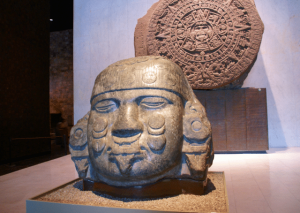 Coatlicue was considered a mother of the gods, for she had hundreds of children. Her name in the Aztec language means “Snake Her Skirt.” She might have been the female part of the dual god Ometeotl or just the mother of some of his children. In some myths, she was the mother of Huitzilopochtli.

He saved her from her other hundreds of children who were rushing to attack her. She was pregnant with Huitzilopochtli at the time. At the last moment, he jumped out of the womb dressed in battle gear and fought off his sibling attackers. In some stories, Coatlicue died in this process, but in others, she lived on.

In the stories where she lived, she predicted the end of the Aztec Empire.

Mictlantecuhtli was the Aztec god of death. He and his wife, Mictecacihuatl, ruled over the Aztec underworld, Mictlan. His other name was Lord of the Land of the Dead and is connected with spiders, bats, and owls. People all over Central America worshipped this god and others like him.

He was in charge of whether people would suffer or not during the afterlife. So the people would offer human sacrifices to him to avoid this. He and Quetzalcoatl had a little run-in in the underworld when Quetzalcoatl came to steal bones to create new humans. Mictlantecuhtli tricked him into keeping the bones, but Quetzalcoatl outwitted him.

Mictlantecuhtli was not seen as a totally evil god. He loved order, control, and harmony, and he held the fates of souls in his hands.

Xipe Totec, also known as “the Flayed One,” was the god of agriculture, seeds, and regeneration. He also was the patron of goldsmiths. He gets his name from his artistic representations, where he is shown wearing the gold/yellow skin of sacrificial victims. Xipe Totec was also one of the sons of the god of duality, Ometeotl, and he was a creator god.

Strangely, despite his link to life and growth, he was also connected with death and many diseases. He was a fearsome god. To be appeased, he required human sacrifices. The chosen victims were usually captives or slaves.

They killed the slaves ceremoniously. After that, they skinned the victims. Furthermore, the skins were worn by the priests and other men for twenty days after.

Xochiquetzal is the Aztec god of fertility, and she was a young and beautiful woman. She was the goddess of love, beauty, and sex. She was even the patron of weavers, predominantly a female profession. Moreover, she was very similar to the Greek goddess Aphrodite and was seen as a temptress/seductress.

She had many husbands and lovers. The creator gods used her hair to create the second woman on earth. In the human sacrifices dedicated to her, young women were sacrificed. Once dead, they were also flayed, and priests wore the skins.

Chalchiuhtlicue was the Aztec goddess of water. She was in charge of all the fresh water on earth, and she was either married or related to Tlaloc, the rain god. She would help bring water to crops, as well as help promote growth and a good harvest. But if she were displeased, she would cause storms and whirlpools and wreak havoc upon the land.

Her artistic representation was rather frightening at times. But she was also often pictured with children or in the middle of giving birth. Not only was she a water goddess, but she was also a patron of newborns. Either way, she was a goddess of life.

Tonatiuh was the Aztec sun god, and despite his links to fertility and life, he was a frightening and violent god. His name means “He Who Makes the Day,” and sacrifices were made to him to keep the sun going in its daily rounds. At the beginning of time, the world was in darkness. The Aztecs initiated sacrifices to spur the sun into life.

However, Tonatiuh required a certain kind of human sacrifice to be appeased. Priests had to collect hearts in order to feed the sun god and make him keep going.

Mixcoatl is the Aztec god of the hunt, and he is also a god of the Milky Way. He is also known for inventing fire. His myths are a bit confusing because he might have been known as Ometeotl, the god of duality, or Xipe Totec, the flayed god. In the festivals and holidays dedicated to him, there is ritual hunting as well as feasting.

People would dress up as animals as well as god-impersonators of Mixcoatl. In addition to that, humans were sacrificed. He is a powerful deity in Aztec mythology as well as others.

Xolotl was the Aztec god of fire, lightning, twins, diseases, and deformities. He is known chiefly as a “bad” god, and he is connected with dogs and the underworld. He was part of the first group of gods after the creator deities. He was considered the executioner of the gods who wanted to sacrifice themselves to build humanity.

Xolotl was pictured as a dog because dogs were considered dirty in the Aztec world. He was the embodiment of many negative attributes. He was the twin of Quetzalcoatl, or rather the rejected twin. Xolotl was also linked to the Mesoamerican ballgame.

The Aztec pantheon was a varied and unique grouping of gods and goddesses. Ranging from kind to violent, these Mexican gods all have exciting stories to tell. These stories are even remembered today.