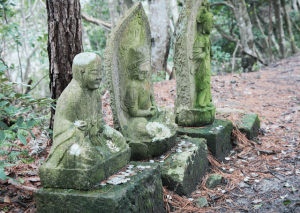 The pantheon of Japanese gods and goddesses is varied. Many are Shinto gods, but others were brought into the pantheon from the Buddhist religions. Surprisingly, the number of Japanese deities is over eight million.

In this article, we will cover a lot of the main, most popular ones and the ancient Japanese gods and goddesses, which are called kami.

Amaterasu is the glorious goddess of the sun in Japanese mythology. She embodies the sun and the country of Japan itself. She rules the universe, and she is the head of the kami, the pantheon of Japanese gods and goddesses. The Japanese Imperial Family claims the divine right to rule because they are “descended” from the sun goddess.

Her name means “Shines from Heaven.” While she is the ruler of the universe and queen of creation, she didn’t create the world. She gained her roles and powers from her father, Izanagi. With her power as the sun, she provides nourishment and life to all the living things below.

Tsukuyomi is the god of the moon as well as order and beauty. He was married to the goddess of Amaterasu, but they were later estranged. Tsukuyomi was a beautiful god. He murdered someone whose appearance and actions he found disgusting. After that, Amaterasu separated from him because she was horrified by his crime.

Their separation would help explain the relationship between the sun and the moon and night and day. He believed so strongly in order and organization that he would do anything to keep it in place. Hence the reason he murdered someone who didn’t follow along with his rules. And without their separation, night and day might never have happened.

His most famous story is when he slew the dragon Orochi. After he killed the dragon, he received the sword named Kusanagi-no-Tsurugi. This sword became a part of Japanese history and was considered sacred.

He would protect people against the strength and forces of Yomi. Yomi was the Japanese underworld. He would try to keep the number of births greater than the number of deaths each day because he was a creator god. He carried around a jeweled spear with him, and he used it to stir the sea.

Inari is a Japanese god/goddess of prosperity, rice, and tea. They were also the protector of foxes, and they were widely worshipped throughout Japan. It was unclear whether they were a god or a goddess. They were often portrayed as either gender or androgynous.

Inari used foxes to protect her as well as send messages. This god/goddess has the most shrines dedicated to them in all of Japan, more so than any other kami. Inari was also very varied, and they changed with time and fit new roles as the country grew and developed.

Raijin is another Japanese god of storms. He is also the god of thunder and lightning, and he works together with his brother Fujin, who brings the wind. Raijin is credited for bringing life-giving rain. These gods were credited with the destruction they left behind them after the storm.

Raijin can be found in both Shinto and Buddhist religions. Raijin had a rather frightful appearance because of his connection to the underworld. With his wild hair and crazed smile, he is often compared to a hungry demon.

Farmers loved this god because of the rain he would bring. If there was no rain, then the farmers believed that Raijin was imprisoned or caught up somewhere.

Fujin is the powerful god of wind, and his brother is Raijin, god of thunder, lightning, and storms. He has a bag of wind that controls all the winds in the world. As opposed to a god, he is more like a demon or a troll, and he’s one of the most well-known in Japanese mythology. His name means either “Heavenly Wind” or “Wind God.”

Despite his lowered status, he is still somewhat portrayed as a god, and he has a rather scary appearance. He has red-white hair, which is often disheveled, as well as green skin. He has an ogre-like face and wears leopard skin. He rides around the world on a cloud, and he uses his bag of air to propel him around.

Ebisu is the god of luck, prosperity, and wealth, and he’s one of the Seven Lucky Gods. He is also the patron god of fisherman, and he represents the wealth that the sea has to offer. He was portrayed as a fat fisherman, and he had a pleasant vibe and wide smile. He was the embodiment of luck that fishermen would have with their haul each day.

He is also often portrayed carrying a fish on his line that he brought home from the sea. He’s either smiling or laughing, and he was partially deaf as well as missing a few bones in his body. Even though he was crippled, he was always seen as a happy, friendly god, ready to give his generosity. 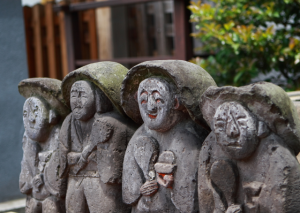 Bishamonten or Bishamon is a Japanese Buddhist deity. In Sanskrit, his name is Vaiśravaṇa, and he is even a part of the Hindu religion. He is the guardian of the north, and he is often portrayed with a yellow face. He sometimes also carries an umbrella and is in company with a mongoose.

He is also an armor-covered god of war, and he’s one of the Seven Lucky Gods. He carries a spear in one hand and a pagoda in the other.

Ame No Uzume is a well-known cheery and merry goddess of the dawn. Because of her merry nature, this goddess was responsible for the performing arts in Japanese culture. One of the ways her name can be translated is “The Great Goddess, Shining Uzume.”

Kagutsuchi is the god of fire in Japanese mythology. Kagutsuchi was the son of Izanagi and Izanami, and when he was born, he burned his mother. She died, and so his father, Izanagi, called for revenge. He took out his sword, and he beheaded Kagutsuchi and cut his son’s body into eight pieces.

According to these stories, each of the eight pieces of his body turned into volcanoes. The parts of his body also created eight different deities. However, his birth marked the beginning of the end of the world in Japanese mythology. His new life was the start of death.

Daikokuten was a god of fortune and wealth. He was taken from other mythologies, but he was turned into a joyful, happy, and generous god in Japan. He might have been shown as vengeful in his early history, but later, he was smiling and happy. He carried a bag as well as a mallet.

There was also a sexualized, phallic image associated with him, and so, he also became the god of fertility. He was often paired with the god Ebisu.

Fukurokuju is one of the Seven Lucky Gods in Japanese mythology. This god was taken from three gods in Chinese mythology and morphed into one in Japan. Some myths believed that he was a human reincarnated as a god. Even as a human, he was immortal and could live without eating.

He was usually shown as an old man with white hair, a bald head, and long whiskers. He carried a staff as well as a sacred book connected to his staff. In this book, he recorded the lifespan of every human on earth. He also has a unique ability because he is the only one of the Seven Lucky Gods who can bring the dead back to life. 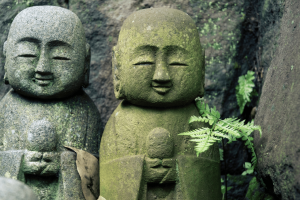 Japanese mythology took its gods, goddesses, and stories from the countries around it. However, they also created their own. The ones they assimilated into their mythology, they made their adjustments. The gods of Japan’s stories are fascinating, the powers are vast, and the beauty is astounding.