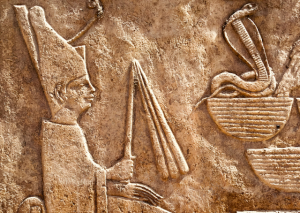 The Egyptian gods numbered in the thousands, and they ruled over every aspect of life. The gods of Ancient Egypt each had their own individual power and reasons for the people to revere and worship them.

The pantheon had thousands of gods, but we’re only going to focus on the 28 main ancient Egyptian gods and goddesses listed below.

Anubis was a very prominent deity in the Egyptian pantheon. He was originally the god of the dead, and he eventually became the god of mummification.

Anubis had many names, one of them being “Lord of the Mummy Wrapping.” He had a jackal’s head, and he acted as a psychopomp, leading souls to the afterlife.

Osiris, after he rose to prominence, became lord of the Egyptian underworld. He was often called “the Mighty One,” and he had been a powerful king during life. Because of his position as lord of the underworld, he could decide which souls were worthy of reincarnation in the next life.

Isis was the wife of Osiris, and she is one of the most well-known of Ancient Egypt’s goddesses. She was a sorceress and a goddess of healing as well as a loyal wife and very loving mother. She was so popular that she was worshipped by other civilizations long after the Ancient Egyptians met their end.

Ra was one of the most important gods of the pantheon. He was the sun god and god of creation, and his myths state that he was there at the beginning of time. Many of the gods claim Ra as their ancestor as well as the Egyptian pharaohs. Connection to Ra gave the pharaohs even more power.

Nephthys was the sister of Isis, yet she was lesser-known than her sister. Despite her lack of popularity, she played a major role. She seduced her sister’s husband, Osiris, and she was the mother of Anubis. This goddess played a role in certain Egyptian funeral rites.

Set, also known as Seth, was the god of chaos and disorder. He was a trickster god, and he enjoyed leaving chaos in his wake. He had the head of an aardvark/ant-eater. He was a shapeshifter and could turn himself into various animals, including Anubis.

Bastet was the beautiful goddess of good health as well as pleasure and protection. She had the slender body of a woman and a cat’s head. Lastly, she was one of the daughters of Ra.

Nut was the goddess of the sky and the heavens. Her name was pronounced “newt,” and she was married to the earth god Geb. Nut was one of the oldest goddesses of the pantheon, and she was often depicted as a cow in the sky. Her symbol was a ladder that could be used to enter her heavens.

Geb was an earth deity, and his other name was “Father of Snakes.” He was the brother and husband of the goddess Nut, and together they ruled the earth and the heavens. Some myths state that his laughter caused earthquakes. Geb was also connected with the Greek god Cronus.

Thoth was a god with many roles in Egyptian mythology. He was a scribe to the gods, creator of the yearly calendar, god of the system of writing, maintainer of the universe, and later involved with the judgment of the dead. He was one of two gods who stood on either side of Ra. 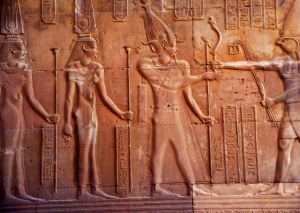 Horus was again one of the most important and long-worshipped deities in Ancient Egypt. He was the son of Isis, and he had many layers to his strengths and abilities that made him a little confusing to pin down.

He was the god of kingship and the sky, and some myths state that one of his eyes was the sun and the other, the moon.

Atum was considered most likely the first god of the pantheon. He created himself, and his name meant “to complete” or “to finish.” He created the other gods by spitting them out of his mouth. He might have contained both female and male attributes.

Hathor was a sky goddess, and she was either the mother or the lover of both Horus and Ra. She was also the “mother” of the pharaohs, while Ra was the “father.” She was one of the goddesses who acted as the Eye of Ra and took vengeance on Ra’s enemies. She was often represented as a cow or at least a woman with a headdress of cow’s horns.

Shu was the god of lions, air, peace, and wind. Hathor created him by being spit out of the god’s mouth. He was both the spouse and brother to the goddess Tefnut, who was also born out of Shu’s mouth. His name meant “emptiness” or “he who rises up.”

Khonsu was the god of the moon, and his name meant “traveler.” Ancient Egypt believed that the moon traveled across the sky every night, hence the name. Strangely, in art, he was depicted as a mummy. He and Thoth were both gods that represented the passage of time.

Khnum was one of the earliest Egyptian gods, and he was considered the source of the Nile. He was also thought to be the creator of the bodies of children. He would make them using the clay of the Nile and build them at a potter’s wheel. After that, he would place them in mother’s wombs. Khnum was often shown with a ram’s head.

Amun was another god of the air, but his role changed over time. He was one of the main Egyptian deities. He eventually became fused with Ra, the sun god, creating the new god, Amun-Ra.

Sobek was a god with many roles. The Ancient Egyptians connected this god with the Nile crocodile, and in art, he was often shown with a crocodile head.

Not only that, but he was also a god of the pharaoh’s power, fertility, and military strength. He was also a protector god, especially protecting against the dangers that the Nile posed.

Khepri was a god with the face of a scarab beetle. He represented new life, renewal, as well as the rising or morning sun. His name meant either “to create,” “to develop,” or “to come into being.” The Egyptians believed that the sun moved across the sky each day. That’s why Khepri was associated with the beetle. Because, like moving the sun, the beetle moved his ball of dung each day.

Maat was a goddess and the personification of balance, harmony, truth, law, morality, and justice. She brought order to the chaos of the universe and helped regulate the stars and the seasons. She represented the morals and ethics that the Egyptians were meant to live by.

Babi was a baboon god in Egyptian mythology. His name meant something like “chief of the baboons.” Because the Egyptians believed that baboons were the dead, Babi was like a god of the underworld. He was also the first-born son of Osiris.

Hapi was another god of the Nile, especially the Nile’s annual flooding. Because the flooding brought water to crops and deposited silt that helped plants to grow, Hapi was like a growth god. Another one of his titles was “Lord of the Fish and Birds of the Marshes.” He was depicted as an androgynous figure.

Bes was a protector god, protector of households, mothers, children, and childbirth. He was later believed to be the enemy of all bad things and would fight against them. He had a feminine counterpart named Beset, and together they would protect households.

Ptah was one of the creator gods, and he was also a patron of architects and craftsmen. His wife was Sekhmet, the warrior goddess. He was believed to be the father of the famous wise man Imhotep. In one of the Ancient Egyptian poems, it was written that he “crafted the world in the design of his heart.”

Seshat was a goddess of writing, wisdom, and knowledge. She was another scribe to the gods, and her very name meant “She Who Scrivens.” She later became the goddess of accounting, astronomy, astrology, mathematics, and surveying. She would assist the pharaohs in their scribing.

They believed that she recorded the amount of time on earth the pharaoh had by making a notch on her palm.

Aten was the disk of the sun, and he was one of the many aspects of Ra, the sun god. He was the central focus of Atenism, a religious system that was created in Egyptian history. He is not exactly a god, and so he doesn’t have an origin story, but he is mentioned in “The Book of the Dead.”

Heqet is the goddess of fertility, and she was linked with Hathor, a sky and mother goddess. Heqet was represented as a frog. This was a sign of fertility in Ancient Egypt because of the connection to the flooding of the Nile. She was the wife of the god Khnum. 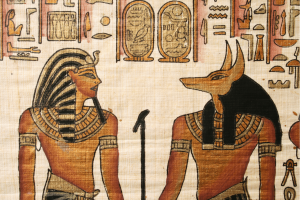 The pantheon of Ancient Egyptian mythological gods was a fascinating one. There is a deity for practically every aspect of life and natural processes that make up the earth. There are over 1,500 named deities, but here we’ve covered the main ones.