Homosexuality in ancient Egypt is a topic much debated over by Egyptologists and historians for a long time now. There are very few depictions of homosexuality in the Egyptian art and history we have uncovered so far.

What little evidence we do have is also quite obscure and open for much speculation. Find out what we know about gay and lesbianism in the ancient Egyptian kingdom in this article.

Ancient Egypt, located along the lower side of the river Nile in Africa, is one of the world’s oldest and longest-lasting civilizations. There is no doubt that this civilization was pretty advanced for its time. Not only its culture, art, architecture, and religion but also the unique lifestyle of its nobility and common people have fascinated archaeologists, anthropologists, and historians for centuries.

However, one often overlooked aspect of ancient Egyptian culture was homosexuality. Ever since archaeologists have started digging around the ruins of ancient Egypt, there has been some evidence of same-sex relations between both men and women at the time.

Read below to find out some of the most celebrated cases of homosexuality in Egypt of the past.

– Being Gay in Ancient Egypt: The Two High Officials

In the year 1964, archaeologists opened yet another one of the many tombs of ancient Egyptian high officials in Saqqarah, modern-day Egypt. However, this one was a bit different than the usual ones they would find.

The engraving on the tombs depicted two men who were buried together in it. As was common at the time, their wives and children were also shown to be with them in these engravings and paintings.

What was unusual was that instead of embracing and kissing their wives, as is seen in most Egyptian tombs, both men were shown to hold, embrace and kiss each other instead.

These two apparently gay men were later declared to be Niankh Khnum and Khnum Hotep, two high-ranking officials-manicurists, to be exact, in the court of the Pharaoh in 2380 BCE. Today we can also call them the world’s oldest gay couple.

The discovery of this tomb and its implication remained the subject of intense debate for decades. Many conservative historians argue that the two men were probably buried together because they were twins.

They also dismiss the kissing shown in the pictures as merely brotherly love and affection. On the other hand, many modern scholars argue that the two men are shown much in the same way as heterosexual couples in other tombs; therefore, they must be a gay couple.

Surprisingly, lesbianism in ancient Egypt was much more acceptable and tolerated than male homosexuality. Although evidence of same-sex relations between women is rare and much-debated over by historians, there is undeniable evidence that it was established practice at the time, if not a much accepted one. Interestingly enough, a number of ancient Egyptian artwork shows two women engaged in explicit activities.

Moreover, the Egyptian book of the dead, a funereal text written back in 970 BCE by a woman, contains a suggestive phrase that hints towards forbidding lesbian intercourse in the temple. This led scholars to argue that the act must have been permissible outside the temple.

Another text found in ancient Egyptian papyrus forbids women from having relations with another married woman. This again leads one to speculate that it must have been okay for two unmarried women to be a couple.

Several art pieces belonging to the middle kingdom of ancient Egypt, show scantily clad women in the company of other women. While one cannot say for sure that these are representing lesbianism, a faint possibility still remains.

Like the Greeks and the Romans, ancient Egyptians too were polytheistic and believed in a multitude of colorful gods and goddesses. Their religious texts are rife with the stories of these deities and their earthly passions and conflicts. They are shown to fall in love, marry and produce children just like humans.

While most of these myths depict the ancient deities as heterosexual, there are some with subtle hints regarding proper acts of homosexuality between them. The god of chaos and disaster Seth, for example, is famously shown to engage in homosexual activity with his own nephew in one particularly scandalous myth.

Scholars believe that because Seth was the god of chaos and these stories often paint him in a blatantly villainous light, the practice of homosexuality wasn’t a much accepted and tolerated aspect of Egyptian sexuality even at that time.

There has been no definitive evidence of any male Pharaoh who was suggestively gay. In any case, sexuality in ancient Egypt was a much-celebrated part of life. Consequently, some stories about gay Pharaoh do exist and are open for speculation. 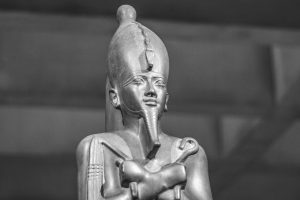 One of the most often cited examples of a gay Pharaoh is that of King Pepi II Neferkare, who reigned during the middle ages, visiting the chambers of his General office late at night to do what he wished to do.

Again, this text is both suggestive and ambiguous in regards to the Pharaoh’s sexual inclination.

Much of what we have come to know about ancient Egypt has been through artwork depicted on tombs and caves, scrolls of papyrus that have been preserved for centuries in these tombs as well as some other random sources.

One famous example of homosexuality in Egypt of the past can be seen in a tomb at Sheikh Fadl, dating back to the 5th to 6th century BCE. This comprises a text from one man to another in which he openly professes his love for his male partner, saying he cannot live without him and would like to rest with him forever.

This inscription is one of the rather more open pieces of evidence that we have regarding the practice of homosexuality in one of the oldest and most liberal civilizations in the world.

Sometimes one can find a lot about a civilization by perusing text from another civilization that co-existed at the same time. Jewish history is closely linked to that of ancient Egypt and provides useful insights into the Egyptian lifestyle. Another closely linked community at the time was the kingdom of Nubia.

Let’s find out what they have to say about homosexuality in ancient Egypt.

– Historians’ Perspective on the Kush Empire

The Kushite Empire of Ancient Egypt was ruled by the 25th dynasty of rulers for over a century. They were a series of five rulers from Nubia, and many historians claim there is strong evidence that there were entire communities of gays and lesions in Nubia at the time. However, not enough research has been performed on the history of Kush to properly confirm or dispel these claims.

Talmud is one of the two primary religious texts of Judaism. It is the foremost guide on rabbinic Judaic laws and the Jewish way of life. Talmud also contains the entire Jewish history including the time of their settlement in Egypt, their subjugation under the hands of the Pharaohs, and their ultimate liberation at the hands of Moses.

It also has some interesting things to say about sexuality in ancient Egypt.

In Talmud, the ancient Egyptians are often held as the prime example of moral corruption and debauchery. We have come to know about several unique ancient customs in this civilization via Talmud. Their casual attitude about sexual relationships has often been used as an example that should not be followed.

Interestingly, female same-sex relationships seem to be more prominently highlighted in Talmud too as compared to male ones. In fact, lesbianism is outrightly described as ‘acts of Egypt’ by a prominent Jewish scholar named Maimonides in this text.

We know quite a bit about the homosexual practices of the ancient Egyptian civilization.

Here is just a brief overview of the entire text, where we described everything we know about queer relationships of the past:

In short, while there might not be solid evidence against homosexuality being prevalent in ancient Egyptian society, we have discovered subtle hints and instances that this was a covert practice in the land at the time.