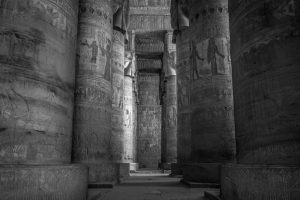 The Temple of Dendera is one of the most prominent and well-preserved temples in the Dendera Temple complex in Egypt. It was built by Ptolemy IX Soter II in 1995 BCE and was known to be the House of Hathor.

We could find more sacred buildings and other remains in the beautiful place of the Dendera complex, although there are some areas that are mired in some intriguing controversies.

Find out more information about these places while we explore the beauty and history of the Temple of Dendera.

The Dendera Temple can be found about 2.5 kilometers southeast of Dendera, Egypt. In total, the whole area of the complex covers 40,000 square meters and is surrounded by a heavy and large mudbrick enclosure wall. The temple features a series of passages, crypts, shrines, and wall reliefs.

Among the structures built in the Dendera complex, the Temple of Hathor at Dendera is one of the most dominant, and it is known to be one of the most well-maintained ancient sites in Egypt nowadays. Its feature shows a great example of the traditional architectural skills during the pharaonic period.

During the ancient Egyptian period, Dendera already had temples and sanctuaries, which were destroyed and rebuilt several times. Some evidence of the first building of the site in the Dendera Temple dated back to around 2250 BCE, but the standing structures were started only during the Ptolemaic period under Ptolemy VIII. The building in the Dendera Temple complex was constructed from about 116 BC to 34 AD.

The Beauty of Hathor Temple

The Temple of Hathor is a true example of the luxurious display and historical significance of ancient Egyptian culture. It is most commonly known as one of the best-preserved sites and most beautiful ancient shrines in all of Egypt.

The temple was built in 2250 BC, as of this day, the artworks in this temple seem well-maintained and properly taken care of. Thousands of years have passed, but the Hathor Temple still shows remarkably amazing features. 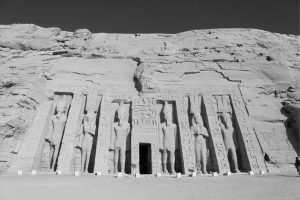 The temple of the goddess Hathor is a representation of a very impressive classical artwork of the Ptolemaic Egyptian.

Outside the temple is the sculpture of Cleopatra VII Philopator and her son with Julius Caesar, Ptolemy Philopator Philometor Caesar, most commonly known as Caesarion.

The temple was built to worship the traditional ancient Egyptian goddess Hathor, who symbolized joy, love, and beauty.

Although the whole Hathor Temple seems amazing, the true masterpiece of it can be seen at the ceiling. During the restoration of the ancient temple, they discovered a very impressive painting above. The ceiling of the ancient temple was decorated with an astrological chart of the zodiac signs and heavens, this is one of the reasons why it is a very lovely scenery to consider when visiting Egypt.

The Dendera zodiac is most commonly known as the ancient Egyptian bas-relief sculpture at the ceiling of the pronaos or portico of a chapel that was dedicated to Osiris in the Temple of Hathor at Dendera. This circular sandstone bas-relief was carved with mysterious symbols of planets and stars.

It seems like a planisphere that is known for depicting constellations in the form of a chart or graph. However, it is more precisely described as a star map than an astrological chart nowadays.

The use of this unique Dendera zodiac and its purposes are not clear yet. Some scholars suspected that the death of Ptolemy Auletes in 51 BCE and the later rise to power in the following year of his daughter, Cleopatra VII Philopator, the last Egyptian Pharaoh, somewhat had a direct relation with this creation.

When a French scientist discovered the zodiac during Napoleon’s Egyptian campaign (1798–1801), the Dendera zodiac captured considerable admiration for it appeared to open a new window to civilization.

After this discovery, sometime in the 19th century, the zodiac was removed from the temple’s ceiling, and it was replaced with a fake one. It became controversial for it might be have been stolen or granted permission from Egypt’s ruler, Muhammad Ali Pasha, to be shipped to France. It is currently found and displayed at the Musée du Louvre, Paris.

Dendera light also raises controversy in the historical Dendera Temple because of its similarity to a “Crookes tube” (an early light bulb) and other bas-reliefs that comprise other images. However, Egyptologists officially said that there was no evidence of light bulbs found in the Dendera Temple, where the images found are just a combination of snakes, lotus flowers, and djed pillars.

On the other hand, there are corresponding texts beside this stone relief to help Egyptians understand the images in Dendera light better. The controversial light bulb represents Nut, the goddess of the sky, and the depiction of the night. Meanwhile, the image of the socket is a lotus flower, and the wire represents a snake (symbolizing fertility).

Despite the lack of evidence to support the fringe theory about the Dendera light, it remains popular among believers. They even insist that their interpretations are more precise, and it might be that professional Egyptologists are mistaken.

A Roman birth house or a Roman Mammisi is another ancient site in Egypt associated with the Dendera Temple complex. A small chapel that is connected to a larger temple can be seen in the monumental gate of the ancient Egyptian temple (pylon). It was built by Augustus immediately after he conquered Egypt in 31 BC.

The birth house was known to be the ritual site of the birth of Ahy (Ihy), the god of music and musicians and the son of ancient Egyptian deities Hathor and Horus. The outside walls of the birth house feature the representation of childhood and the divine nativity of these deities. There are also some depictions of Bes, the patron god of childbirth, on the capitals of the columns nearby the Mammisi or birth house.

Inside the sanctuary are three divided corridors; the left and right corridors were thought to be decorative and symbolic. At the back of the wall of the sanctuary, the large false door that corresponds to the location of the cult statue, the Temple of Hathor can be found. False doors are also known as “Ka doors,” and “Ka” is an element of the soul.

The Mammisi of Nectanebo II was also known as the old Mammisi or the Ptolemaic Mammisi. It was built by Nectanebo I; one of the last rulers of ancient Egypt. The birth house is smaller than the Roman Mammisi, and it was dedicated to Harsiese (“Horus, son of Isis”).

The temple was further embellished during the Ptolemaic period with the images of Ptolemaic pharaohs making offerings to Khnum and Hathor, creating Ahy on his potter’s wheel under the supervision of Heqet, the ancient Egyptian frog goddess.

Besides the temple of Hathor, there is a building that is famous for being unique in Egyptian architecture and religion, which is the Sanatorium. The Sanatorium was an essential spa that the ancient Egyptians could visit with the hope of healing from the Egyptian goddess.

Inside the building were sacred waters for bathing and sleeping quarters. Sick people believed that they would gain help from the goddess through their dreams. It was the priests of Hathor who administered the early pharmacy, distributing unguents and advising on cures to their illnesses.

On the west side of the Sanatorium is the small chapel of Montuhotep, which was built by Montuhotep Nebhepetre in the 11th Dynasty. There was a belief that this chapel was built for the cult of the pharaoh and not for the goddess Hathor. The Chapel of Montuhotep did not survive. It was dismantled and rebuilt inside a museum in Cairo, Egypt.

Other Remains at the Dendera Temple

We can find the Gateways of Trajan and Domitian at the main entrance of the Dendera Temple complex.

The Roman Kiosk of the Dendera Temple has four Hathoric columns, one for each side. It is roofless. This was where the ancient Egyptian goddess’ union with the sun disk was practiced.

The temple of the birth of Isis was built to honor the Egyptian goddess Isis, and this temple was considered the last temple built in the classical Egyptian style.

The Sacred Lake, most commonly identified as Cleopatra’s pool, is a deep, rectangular artificial pool surrounded by a wall. It represents the prehistoric creatures of the lake and was very useful in terms of priestly ceremonies and other water demands of the temple. The lake was also incorporated with Amun, the god of the air and one of the ancient Egyptian deities.

The Basilica at Dendera is one of the oldest Roman churches. Its remains were located near the birth house in the Hathor Temple. This Roman church was marked to be the most famous Christian church of the fourth century. One of the possibilities that it was true was the celebration of the Easter festival somewhere in Dendera, where thousands of monks gathered to celebrate.

Can We Still Visit the Temple of Dendera?

Maintaining such historical features of ancient Egyptian history is something Egyptians should be proud of. The restored temples, especially the magnificent Hathor Temple, are ready for tourist attractions. They have maintained the historical complex well, such that Egyptians and even foreigners could benefit from it. 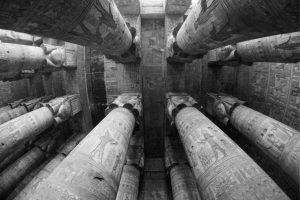 The Temple of Dendera is a visual representation of how Egyptians give importance to their culture and history. They have maintained the historical complex well, such that Egyptians and even foreigners could benefit from it.

Here are some remarkable points on how this temple has developed:

Surely, if you are able to visit the Dendera Temple, you can explore some sacred places that will make you feel like you were born in ancient Egyptian times.