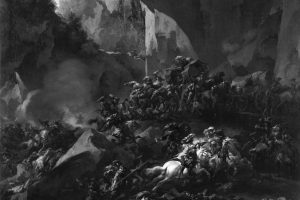 The Battle of Jaffa was part of a series of military campaigns of the crusaders led by the King of England, Richard I and Sultan Saladin, a Muslim leader who had the stronghold of Jerusalem at that time. This epic battle was the Third Crusade’s final fight, which had a surprising turn of events.  In some ways, after a week-long war, both parties emerged victoriously.

Read here to find out more.

The Siege of Jaffa, also known as the Battle of Jaffa, was the last battle of third crusade between King Richard I of England, the leader of the Crusaders at that time, and Saladin, the founder of the Ayyubid Dynasty. It occurred during a period in the crusade when Richard was in a low position. He had twice led his Christian army within sight of Jerusalem, but they had to retreat due to various causes.

Unfortunately, the French contingent refused to follow his orders, and even his troops were dissatisfied with his decisions. In addition, he learned of his brother’s plan to usurp his crown in England. The crusade appeared to be collapsing, as the strength of its commander dwindled on all fronts.

On the other hand, Saladin was worried because even though he had Jerusalem, the Crusaders were still able to control the coastline from Acre to Ascalon. This foothold was regarded as a dangerous threat as it appeared to be the Crusaders’ base of operations for attacking Egypt, Saladin’s stronghold. With this in mind, Saladin devised a strategic plan to strike at Jaffa where Richard was least expecting it.

Jaffa was located 40 miles northwest of Jerusalem and served as the holy city’s major entry point. If Saladin was successful in seizing it, the Crusaders’ territory would be divided, and their lines of communication would be destroyed, posing a threat to their survival.

Battle of Jaffa: The First Encounter

On July 26, 1192, while Richard was in Acre, Saladin led a massive army to attack Jaffa, but the defenders were able to hold their post for a while. The Christians dug countermines to destroy the Muslim tunnels, while the defenders lit bonfires in areas where the Muslims had already breached the walls.

This brilliant approach resulted in an unbreakable flame wall. Hand-to-hand combat was also brutal, and even the attackers admired the bravery of the Christians.

Saladin’s force, however, was extremely strong, and they were able to enter Jaffa after four days of combat. The remaining defenders barricaded the citadel and stayed there, prepared to die. Thankfully, the newly elected patriarch of Jerusalem was able to negotiate with Saladin, who agreed to let the remaining Christians live in exchange for a ransom.

When news of the attack on Jaffa reached Richard in Acre, he immediately assembled a fleet of 35 galleys made up of his best troops. While he commanded the fleet, he ordered the rest of his army to follow him to Jaffa on land.

Saladin quickly dispatched his warriors to the beach upon learning of Richard’s fleet’s arrival, preparing to combat the Crusaders when they arrived. Standing offshore, Richard and his officers saw the massive line of Muslim men at the beach and concluded that Jaffa had already fallen.

Surprisingly, a brave priest was able to escape miraculously and reach them to announce that the Crusaders still controlled the citadel. This was what Richard needed to hear. Even though the boat had not reach the shore yet, he dived into the water with his sword and crossbow ready to fight and defend Jaffa.

Saladin was enraged and humiliated when he learned of his men’s retreat, especially given their superior numbers to the enemy’s. Nonetheless, he was compelled to proclaim defeat and withdraw his forces., as Richard’s troops worked to rebuild Jaffa, the Sultan sent emissaries to begin negotiations, but both leaders exchanged insults.

The Final Battle of Jaffa 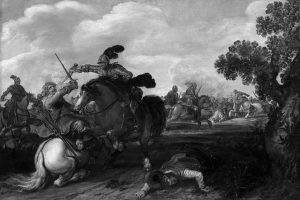 While waiting for the Crusader force that traveled on land, Richard positioned his army east of Jaffa—the same spot where Saladin’s tent was previously pitched. This was interpreted as another dig at his opponent.

Without his remaining troops from Acre, the Lionheart only had 2,000 men, including only 80 knights, with few horses and mules to defend Jaffa.

Saladin’s camp realized this and planned a surprise attack on the morning of August 5. Fortunately for the Christians, a sentinel noticed them and quickly sounded the alarm. Despite being caught off surprise, Richard quickly rallied his men to fight the 7,000 Muslim attackers. He arranged his small troop in a formation utilizing his infantrymen and crossbowmen.

– The Rise of the Battle

They were able to establish an impenetrable front defense by crouching side by side with their shields, as well as spears embedded in the ground with tips bristling outward. Crossbowmen had assistants in loading to ensure a continual stream of arrows. He told his crossbowmen to aim for the enemies’ horses, while he and the other knights positioned themselves behind them, mounted and ready to charge.

This brilliant formation proved to be effective as Saladin’s soldiers stormed the Crusaders five times, but each time, they were unsuccessful. When the Muslims began to exhibit indications of exhaustion and appeared to be demoralized, the Lionheart and his knights seized the opportunity to attack them. Saladin’s army was caught off guard and began to collapse.

– End of the Battle

Saladin, who had been watching from afar, praised the Lionheart’s fighting ability. When Richard’s horse was wounded, Saladin gave him an Arabian stallion in an unprecedented display of battlefield gallantry.

Richard eventually accepted the offering and continued to fight, killing a large number of opposing soldiers. As the conflict progressed, fewer Muslims were willing to fight Richard as he appeared to be unstoppable. He even rode up and down the enemy’s line, provoking men to face him.

Saladin’s son was inclined to take the challenge, but his father intervened, probably to avoid a dead heir. When no one else stood up, Saladin finally withdrew, and the week-long battle at Jaffa ended. The war ended resulting in a total loss of 700 men and 1,500 horses from Saladin’s troops, meanwhile, Richard only lost 200 men.

Back at the Muslim camp, the troops were devastated by the outcome, and their morale was so low that even Saladin himself was said to not leave his tent for three straight days. In the meantime, a disease afflicted Richard and his soldiers, furthermore with both sides weary, the archrivals, Saladin and King Richard, reached an agreement of peace—the Treaty of Jaffa.

Signed on September 2, 1192, the treaty guaranteed a truce between the two forces for three years. It primarily addressed two main issues, which were the status of Jerusalem and Christian pilgrimage rights and the extent of Crusader state power in the Holy Land.

The treaty ensured the Christians and Muslims’ safe travels and stipulated that Christians would control the coast from Tyre to Jaffa. On the other hand, the defenses of Ascalon were to be dismantled, and the town must be returned to Saladin.

Saladin and King Richard were both unhappy with the deal, but they didn’t have much of a choice. The challenges and expenditures for the battle had weakened the Islamic ruler, whereas King Richard was eager to return to England and settle the planned usurpation of his throne.

– At the Start of the Battle

The battle was a significant confrontation that showcased the rivalry of two of history’s most renowned crusaders: Richard I and Saladin. It also displayed Saladin’s chivalry and Richard’s unmatched tactical brilliance on the battlefield.

On July 26, 1192, while Richard was in Acre, Saladin began to attack Jaffa. The Muslim soldiers succeeded in entering the town, but the Christians continued to defend it until the Lionheart’s arrival. From the shore, upon learning that Jaffa had not yet completely fallen, Richard dived into the waist-deep water and charged at the enemies.

During the initial encounter, they successfully drove off Saladin’s forces. Upon learning about how small in number Richard’s troops were, Saladin, along with 7000 of his men, launched a surprise attack on the morning of August 5, 1192. Fortunately for the Christians, a sentinel saw the enemy and sounded the alarm.

– At the End of the Battle

Though the Lionheart was caught off guard, he was quick to make a formation out of his small army that made them impenetrable. Saladin’s soldiers retreated upon seeing Richard’s prowess on the battlefield.

Even Saladin himself admired his archrival and showed gallantry by giving Richard a stallion when his horse got wounded. Richard further challenged any enemy to face him. Saladin’s son wanted to take this challenge, but his father stopped him.

With no one wanting to fight the Lionheart and his troops, Saladin withdrew, and the battle ended. Both parties arrived at a settlement agreement soon after. The Treaty of Jaffa was signed on September 2, 1192. It stated a three-year truce between the two forces. 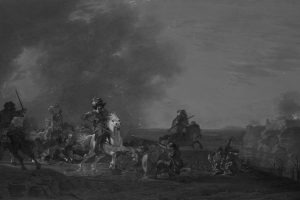 Check out what we have covered in the article:

The Battle of Jaffa, as the last battle of the third crusade, left a significant mark on history.