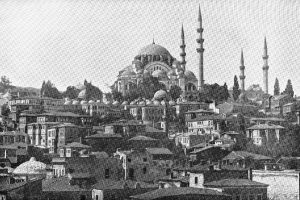 Ottoman Architecture is world-famous for its illustrious structures and excessive use of tiles, minarets and tombs. The best thing about Ottoman architecture today is that it has withstood the harshness of passing time and is still standing strong.

The Ottoman architects, called Mimar in Turkish, surely left a mark on this world with their skills.

In this article, we take you through a journey of the architecture of the Ottoman empire and its glorious history.

Architecture is an important metric on which the civilization, wealth and modernity of an empire are measured. From ancient times, the empires and their rulers have put a lot of pressure on building a very advanced image of their state.

Even if the people of the state were dying of hunger, the rulers would overlook that and concentrate on building huge palaces and official buildings. This was surely a violation, but at that time the term human rights did not exist yet.

Nevertheless, among many other things, such empires gave the world its architectural heritage. A huge number of such buildings and monuments still stand strong today and explain the finesse the architects put into them. While naming a few of such architectural marvels, one cannot overlook the contribution of the Ottoman architects.

– The Ottomans and Their Architecture

The Ottoman architecture started with the ideas taken from Iranian, Balkan and Byzantine architecture. The structures and buildings at the start of the 13th century appear to be inspired and do not follow a single unique pattern or form. Throughout the 15th century, the Ottomans were still figuring out and defining their architectural prowess and unique take on architecture.

The period from the 16th to 17th century, however, is defined as a period of Classical Ottoman Structure, which included unique patterns and defining colors of the empire.

The Ottoman Empire was largely ruled by a Sultan, who was the equivalent of a king. For the royal families, many palaces and castles were built. In addition to the royal buildings, the Ottomans built many worshipping places for themselves known as Mosques. For carrying out official businesses, many government office buildings and units were also constructed.

The ruling parties were also responsible for constructing vocational institutes and libraries. From living in tents, makeshift shelters and selling carts, the common Ottomans also advanced their housings and shopping complexes.

The most apparent characteristic of Ottoman architecture is the extensive use of domes and arches. Every Ottoman-era building has at least a dome or an archway. This quickly gained popularity throughout the Ottoman empire and spread across the area, but the Ottomans were not the first to introduce either of these styles.

The reason for integrated architecture is the inspiration they took from the Persian era. Among many other things, the Ottomans used tiles and stonework to decorate and beautify their buildings. This is the reason why so many Turkish buildings are similar in color, because the tiles at that time could only be made in certain colors.

The patterns on the Ottoman Empire buildings were very intricate and complex. They mostly included a combination of floral and geometric designs. The designs also took a lot of time to be completed before they were open for use. Each structure in the Ottoman empire had to be huge, illustrious, airy and with open spaces outside, so huge flower gardens were a must for Turkish palaces and buildings.

The earliest periods of Ottoman architecture used three major materials for the construction of all sorts of buildings and structures. These materials were stone, brick and timber. The sources from which these materials were procured depended upon the construction at hand. Stone and brick were mostly used for the exterior designs of the buildings whereas timber was used for the interior.

The Turkish buildings and architecture are the work of the Turkish architects known as Mimars. These Mimars brought reality to the visualization of the rulers and also to their own thoughts.

In the Ottoman empire, the hold of construction of a building of any sort of structure was given to the designated Mimar, who had the utmost power over how to construct a structure without any involvement of authorities.

One of the reasons why Ottoman architecture was so exquisite is because it was the work of the mind of a single competent person. The Mimars were quite celebrated personalities in the Turkish courts at that time. They were paid well and had an esteemed position in society. Among such mimars was Mimar Sinan.

Mimar Sinan was one of the most important Turkish personalities of the 15th century. He was the royal architect for the sultans Suleiman the Magnificent, Selim II and Murad III. He is famous because of his revolutionary ideas and architectural intellect and is considered the greatest architect in all of Ottoman history.

Sinan Agha grew up in a small town in Kayseri near Anatolia. His father was a stonemason and he worked closely with him. Due to his diligent nature, he was appointed to the personal court of the palace. He quickly rose in the ranks, and during his time at the palace, he studied architecture and civil engineering.

He started his architectural and engineering career while still being appointed in the palace. He became an expert at constructing fortifications as well as military infrastructure projects, most notable of which were roads, bridges and aqueducts.

At the age of 50, Mimar Sinan was appointed as the Chief Royal Architect. Among the numerous structures that he created, he is most famously known for the Selimiye Mosque in Edirne and the Suleiman Mosque in Istanbul.

Europeanization of the Ottoman Architecture

The advent of new construction materials like cement and plaster were highly used, leaving behind the traditional stone and timber. This revolution was dynamic, and at one point the amalgamation of the classic Ottoman architecture was seen simultaneously with the European designs.

There are many Turkish buildings and mosques today which were constructed in the time of the Ottoman empire. These structures hold a sentimental value for the Turks today and are a sight to see.

Here are some of the world-famous names from Ottoman architecture and their details: 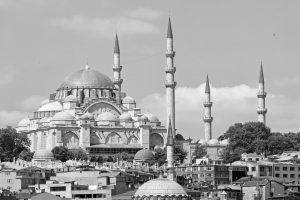 The Suleymaniye Mosque is one of the biggest mosques in Turkey. Its foundation was laid in 1550 by Mimar Sinan under the orders of Suleiman The Magnificent. The mosque was completed and opened for use in 1557.

It was also named as a World Heritage Site by UNESCO in 1985.

Many of the Ottoman royalties are buried here, including Suleiman I, Hurrem Sultan, Suleiman II and Ahmed II. The mosque is surrounded by many other complexes that serve different purposes, such as a library, funerary preparations hall and a sitting hall. The interior and exterior of the mosque are exquisite, with a lot of work done for restoration and protection purposes. 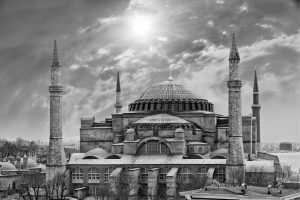 The main building is surrounded by many small complexes that are used for various purposes.

In 2020, the Turkish government opened the mosque for prayers. Since then, prayers are offered in Hagia Sophia every day without delay. The mosque is also famous for the number of friendly cats that roam around inside and love to get treats from people passing by. 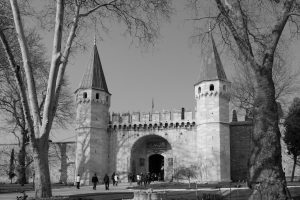 The Topkapi palace has to be one of the most extraordinary Turkish architectural pieces of history. The literal meaning of Topkapi is Cannon Gate.

For centuries, it served as the main residence and administrative unit of the Ottoman sultans, but today the palace is a museum.

Its construction began in 1459 under the orders of Sultan Mehmed The Conqueror. The palace has more than a hundred rooms but only a few of them are accessible to the public. The museum has a lot of antiquities on display, which are a great attraction for tourists. 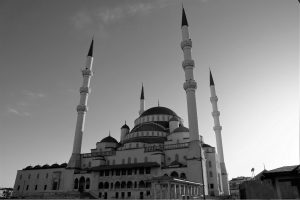 Selimiye Mosque in Edirne is another masterpiece by Mimar Sinan.

It was commissioned by Selim II.

Selimiye Mosque is an imperial mosque that was built between 1568 to 1575 and was named as a World Heritage site by UNESCO in 2011.

Like the other Ottoman buildings of that time, this Ottoman Empire mosque is also majestic with smaller complexes on the sides. It showcases a huge dome in the center which is surrounded by tall minarets. The largest mosque in South Africa, the Nizamiye Mosque, is inspired by the Selimiye Mosque.

The architecture of the Turks today is quite modern and somewhat minimalistic. The ancient ways of extravagance and enormity in architecture have long been buried. The architects of today go for durability rather than showing off what they can pull off. Surely modern Turkish architecture has been greatly influenced by the western world and will continue to do so.

The Ottoman empire is one of the greatest empires that the world has ever seen. From humble beginnings to the empire’s not so humble downfall, the Ottomans have given a lot to the world’s art and culture. Let’s take a look back at how they started.

– The Rise of the Ottoman Empire

In the 13th century, the world saw the rise of an empire in northwestern Anatolia that would change the course of history. The Ottomans started from Seljuks who lived in the area.

A warrior of the Kai tribe started uniting different tribes under the banner of their religion, Islam. The warrior was Osman I, and with his increasing army, he laid the foundation of the Ottoman Empire.

The Ottomans took the world by storm even though they started with nothing to their name but small businesses of clothing and fodder. In any fight, the party with the least to lose wins. Similarly, Osman and his allies gained wealth and popularity as they rid the area of the Crusaders and Mongols. Their businesses grew exponentially when they took control of the silk route.

From here, there was no one in the area that could remotely stand up to the Ottomans. They fought many battles and overthrew many regencies. As they grew in number, their land also grew. Now the world knew who the Ottomans were on the battlefield.

– The Ottomans and Their Art

When the Ottomans became wealthy and had a lot to their name, they started to bring art to their culture. The art of calligraphy, music, clothing, animal keeping and painting became very popular.

Artists were very under-appreciated at the start, but soon they were recognized as important pillars of cultural society. Some might even say that the advent of Turkish artists resulted in a boom in the tourists and merchants coming to the area.

Ottoman art is famous for using intricate patterns, both geometric and floral. The art itself is pretty distinguishable. This is also because the Ottomans believed in keeping their artist heritage alive even after the original Turks were long gone.

Among many art forms in the Ottoman empire, architecture was certainly the one that thrived most. 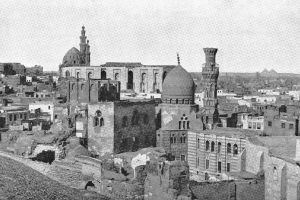 The Ottoman architecture is no doubt a wonder of the Mimars and a sight to behold.

Should you ever plan on visiting Turkey, make sure to check out their beautiful palaces and mosques.