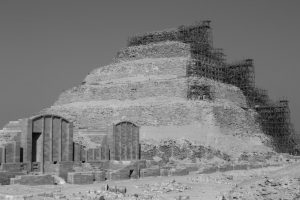 Pyramid of Saqqara is the name of a structure that most commonly refers to the Stone pyramid of Djoser which is one of the earliest stone buildings in the world as of now.

However, the Saqqara is a vast 5,000-year-old necropolis littered with pyramids, tombs, and temples representing centuries of the Ancient Egyptian empire.

Find out everything you should know about Saqqara and its tombs in this all-encompassing guide.

What Is Saqqara: A Brief Intro

– The First Capital of Egypt: Memphis and Saqqara

Saqqara served as a necropolis for Memphis, the first capital of the ancient Egyptian kingdom that was founded by King Narmer in the year 3200 BCE. In the old kingdom, as well as during parts of the middle and new kingdom of ancient Egypt, there was no other better capital than Memphis.

Located at the delta of the great river Nile as well as on several other important trade routes, it served as the ideal administrative capital of a unified Egypt.

The necropolis of Saqqara gives us a very realistic depiction of what a metropolitan city was like back in the day. Serving as the seat of the Egyptian royal power for over eight dynasties, it contained several temples, tomb, and mastabas from a number of different time periods. These sites were then surrounded by workshops and arsenal factories. Some traces of the residential areas of the commoners also remain.

– Pyramid of Saqqara: A Favorite Burial Site of Nobility

Saqqara also served as an ancient burial ground in Egypt for both royals and nobility for around 3500 years. The entire Saqqara necropolis is filled with tombs, funeral complexes, and pyramids.

As an important administrative and military center of one of the most powerful civilizations of the world, Saqqara is also home to the tombs and mastabas of several nobles and military officials. You can literally see the progression of ancient Egyptian funerary architecture progress and evolve from one historic period to the next there.

Saqqara was located at the junction of important trade routes in ancient Egypt. It was also an important military stronghold for the royalty.

Even when the seat of the royal power transferred to other cities with later dynasties, it still remained an important military base and high-ranking officials continued to be buried there along with their families.

Saqqara should definitely be on everyone’s itinerary when visiting Egypt. Just a day’s trip away from Cairo, this necropolis has turned into a wildly popular tourist attraction in recent years. Every year, thousands of tourists pay pilgrimage to this standing monument of one of the greatest civilizations of the world. 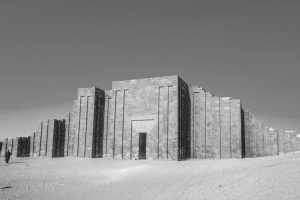 There are so many places to see and visit in Saqqara that only one day’s visit might not be enough.

We suggest you take several days out of your trip to see the Saqqara necropolis in all its glory.

For those short of time, though, there are a couple of must-see places that shouldn’t be missed at any rate.

These include the stone and red pyramids, Imhotep museum, and the pyramid of Teti. You will also find the double tomb of Niankh Khnum and Khnum Hotep, allegedly the world’s oldest known gay couple. A fifth-century old monastery is also located and should be visited in Saqqara.

When Was Saqqara Built: Understanding Its Origin

Saqqara was founded in 3200 BCE during ancient Egypt’s second dynasty period. A total of 16 kings built their pyramids there over time. Today, it is over 5,000 years old. The pyramids and other architectural remnants of the city are still visible and being preserved by various significant heritage societies.

– The Discovery of Saqqara

After Saqqara was abandoned and became a necropolis, it became a common site for looters and the occasional explorers who came to the site by accident. However, no formal explorations or systemic research was undertaken until Napoleon invaded North Africa during his campaigns of 1798 to 1901.

Napoleon also brought with himself a team of scientists and researchers who all went headfirst into an in-depth study of Egyptian history. That’s about when Egyptology emerged as a full-fledged science that continues to mesmerize people all over the world to this day. Their area of focus remained more towards other archeological sites, though.

Moreover, Saqqara remained a rather obscure remnant of the ancient Egyptian civilisation until a team of German and British excavators arrived at the site around 1920. They were joined in 1926 by the French Egyptologist and architect Jean-Philippe-Lauer who is now credited with making the most detailed discoveries and analysis of the tombs and catacombs of Saqqara.

This team was also responsible for starting large-scale restorations of the necropolis that continue to this day.

Some Popular Attractions At Saqqara

The more we are delving into this ancient buried city, the more fascinating it gets. To this day, researchers and excavators keep making new and exciting discoveries regarding Saqqara.

Given below are two of the most amazing places to visit in Saqqara.

The step pyramid or the pyramid of Djoser is a very popular and important archeological site in the Saqqara complex. It holds the title of being the oldest Egyptian tomb made entirely of stone. This pyramid holds a serious attraction not just for tourists but also for architects, Egyptologists, and archeologists.

– History Of The Stone Pyramid: The Visionary Pharaoh Djoser

The stone pyramid was built in the 27th century BCE, during the period of the Third Dynasty when Egypt was ruled by the Pharaoh Djoser. Djoser was probably the first or the second king of the Third Dynasty. Furthermore, he is credited with being the first King in Egyptian history who started the tradition of building using stone.

– Imhotep: The Legendary Architect Of The Stone Pyramid

The stone pyramid was built by the legendary ancient Egyptian architect Imhotep on the orders of the Pharaoh Djoser. Imhotep is quite a mysterious and important figure in the history of ancient Egypt. Not only was he a famed architect, but he also enjoyed much prestige as the chancellor to Djoser as well as a priest at the temple to the sun god Ra at the Heliopolis in Saqqarah.

Today, he is considered to be one of the greatest and most innovative architects of his time. He is also credited with inventing the classic shape of the Egyptian pyramid.

Another great mystery surrounding this man is his potential burial site. Historians believe it to be somewhere in or around the Saqqara necropolis. Yet, despite vigorous excavations, archeologists are yet to find the tomb of this clever man.

– Evolution From Traditional Mastabas To Pyramids

Before the time of Pharaoh Djoser, the tombs of Kings and high officials were designed in a rather different way. Called Mastabas, these tombs were made of mud bricks and were rectangular in shape with sloping walls. Their walls were engraved with inscriptions and hieroglyphs depicting the dead and their relatives.

The construction of the stone pyramid of Saqqara marked a very important transition in the ancient Egyptian architectural style from mud mastabas to pyramid-shaped tombs made of stone.

As much as this city offers above ground, equal wonders are hidden underneath the surface of the earth. The Saqqara necropolis is home to a vast network of catacombs underground.

These catacombs mostly served as the temples to the various deities that were worshiped by the people back in the day. They are filled with all sorts of treasure, artwork, and mummified animals. 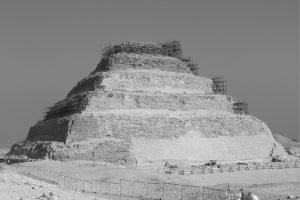 In this article, we learned much about the ancient necropolis of Saqqara and its history. N

ow, it’s time to go over the most pertinent points one more time:

The Saqqara necropolis is home to the Stone pyramid along with several other important structures dating back to the very beginning of the ancient Egyptian civilization. To this day, excavators keep making new discoveries in this ancient burial ground of the kings.