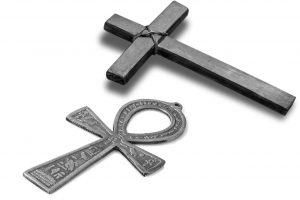 Ankh vs Cross is a centuries-long debate about two very important religious symbols. This debate has encompassed two of the most important religions and their people: Christians and Egyptians.

Today, a lot of Egyptians are Christians, but this debate is still as controversial as ever.

In this article, we bring you the facts about the Ankh, the Cross and their importance in their respective religions.

Here is a quick comparison table of these two symbols.

Difference Between Ankh and Cross

The main difference between an Ankh and a Cross is their appearance, where the Ankh is a cross with loop on top used in Egyptian mythology and the Cross is simply a cross used in the Christian religion as a religious sign.

These signs portray important knowledge and symbolisms for the followers of its respective religion. Among many other things, the signs are also used physically to portray the religion and its beliefs.

The debate is mainly between the historians of the religions and cultures because they are only looking for answers to the years-old questions. To understand the points of view of both these groups, we must first learn about the origin of the signs and the stories behind them.

Egyptians and Their Religion

The Egyptian empire is one of the oldest empires in the world. The empire was founded when people started inhabiting the banks of the River Nile. During that time, people used to settle wherever they could find enough water because of obvious reasons, so with time, the population near the River Nile increased and an empire was started.

The Egyptian people were highly religious and believed in more than one god, so their religion was based on polytheism. There were numerous gods and goddesses in the Egyptian religion and most of them were half-human and half-animal. The people prayed to these deities and asked for guidance.

There is no name for the Egyptian religion because there are so many interpretations and gods in the religion. Religion existed more than a thousand years ago and is now present only in the books that the historians wrote after analyzing the scriptures and tablets from that period.

Whatever knowledge we have about the religion is either through the ancient scriptures found inside the pyramids or the people who passed on the stories. 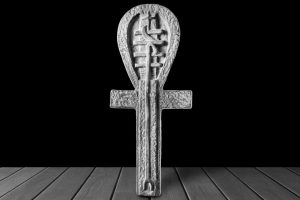 Ankh is the ancient Egyptian symbol for the key of life or the cross of life. According to historians, it dates back to the Early Dynastic Period (c. 3150 – 2613 BCE) of the ancient Egyptian culture. The Ankh is a cross with a loop. It is most famously ornated with valuable gems and is always golden plated or made of gold.

The Ankh was considered as the symbol of life on Earth and also the afterlife. The Egyptians highly believed in the afterlife, so the Pharaohs and the Egyptians kept the Ankh close to them through life and were also buried with it because they wanted their afterlives to be easy and prosperous.

It is one of the most ancient symbols of ancient Egypt. The symbol was carried through the empire by the reigning Pharaohs and the temples. Each Egyptian had the Ankh symbol in their house and sometimes in a chain around their neck.

– Ankh and the Egyptian Deities

The Egyptians believed in the supremacy of their gods and goddesses. They used to draw or keep statues of the deities, and when the artifacts of ancient Egypt were discovered along with the tombs inside the pyramids, it was seen that many of the gods and goddesses were holding the Ankh symbol.

The Ankh symbol is also frequently associated with a mirror. This is because they say that the afterlife will be a projection of your deeds on Earth. So inside the tombs and in the graves, the sign of Ankh could be found in plentiful numbers.

The Egyptian goddess, Isis, is also very frequently associated with the Ankh. The cult of Isis in the Early Dynastic period was one of the most influential cults of the time and they chose the Ankh as their symbol. They promised happiness and tranquillity to the people of the cult.

In contrast to the Egyptian culture and religion, Christianity is a monotheistic religion that believes in the oneness of God. They believe that God created everything in the universe. The belief of Christians revolves around the life, death and resurrection of Jesus Christ, who they believe is the son of God.

According to their belief, Jesus was born to Mary the Virgin. Jesus was crucified in either AD 30 or AD 33 by the Romans, who crucified Jesus using a cross on charges of treason and falsehood. The crucifixion was carried out in Judea, which in the present time is Jerusalem. This form of execution was common for the trouble makers and the condemned criminals of that time.

Christians believe in the afterlife and also that Jesus Christ will resurrect from the grave and every sinner will stand on trial, so they have a firm belief in the return of Jesus Christ. The religion of Christianity is one of the most followed and most famous religions in the world today. 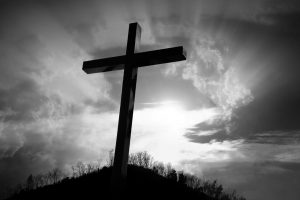 The principal symbol of Christianity is the Cross. The cross represents the two main beliefs of the Christians.

In different cultures today, the sign of Jesus Christ, the cross, is used in various ways. There are four types of the cross in the world today: Greek cross, Latin cross, St. Anthony’s cross and St. Andrew’s cross. These different types represent different interpretations of the same religion. Sometimes the Cross is also referred to as the Christian Ankh.

The sign is made through a special process known as a benediction and it can only be done by professionals. The sign is used in all sorts of Christianity-related rituals and also during exorcisms. The Christians have also fashioned the cross into wearables like necklaces, earrings and nose pins.

Here are some quick facts about these important religious symbols.

Ankh is Cross: The Various Opinions

In both cultures, these symbols, the Egyptian Ankh Cross are much loved and cared for. But there are allegations on both sides of plagiarising and copying the sign, ankh and Christianity. Because the signs match in shape, one is thought to be copied from the other.

The Egyptian historians argue that the Ankh came first and that the Cross is an extension of the sign. This could be true for some reasons.

One is that the Egyptians and their religion came a long time before the crucifixion of Jesus Christ. Also, the Egyptians relied heavily on symbols and hieroglyphics, so it might be true that the Ankh came first.

On the other hand, Christian historians argue that the Cross came first and then the Egyptians put a loop on it and made it their own. This can also be true because the cross symbolizes the crucifixion of Jesus Christ and this happened in the near past, at least nearer than the advent of the Egyptian religion.

This notion in no way concludes that the Cross is plagiarised. The Cross is also unique and came after the crucifixion of Jesus Christ in Judea. The regions of Judea and ancient Egypt were at a distance from each other, so to think that the signs are copied might be a stretch.

If we are exploring every possibility, then we also need to explore the potential that one sign is copied from the other. Whatever is the truth, it should make no difference to any belief if their sign is copied. The signs represent the emotions and beliefs of people despite what the truth is.

If we look at the world, almost everything is somehow plagiarised. The reason behind this is that we all are connected. This connection does not mean that we start pointing fingers at each other but rather we should respect and care for one another because this connection makes us human.

So what if the signs are a copy of each other?

The followers are true adherents to their religion and beliefs, and that is what matters the most. 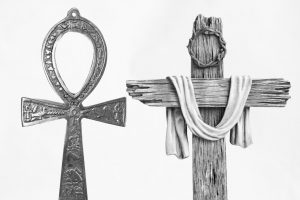 In this article, the debate of Ankh vs Cross was discussed extensively. Here are some of the main points we learned:

In today’s time, we cannot 100 percent guarantee which side of the tale is true because everything happened so long ago. However, what we can definitely do is respect one another and their beliefs.