Ceres: Myth of the Goddess of Grains 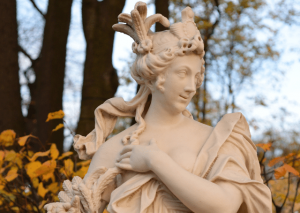 Ceres, goddess of grains, is the Roman equivalent of Demeter in Greek mythology, and is the goddess of agriculture and harvest. She was the patron of farmers, and the goddess of the plebian, or working-class. Most of her renown is connected to the abduction of her daughter, Proserpina.

This article will share the whole story of Ceres’ beginning as well as the sad story of Proserpina and how Ceres lost her to the underworld.

Who is Ceres in Roman Mythology?

Ceres is the Roman goddess of agriculture. She was the champion of the lower classes. So most of her festivals were celebrated by the plebeians. As Jupiter’s sister, she held one of the most prominent places among the 12 main deities in the Roman pantheon. The worship of this goddess and all the others lasted until around the fourth century AD. That began the adoption of Christianity.

Ceres is part of the plebeian Aventine Triad. This was a group of gods/goddesses worshipped by the working class. This group included Ceres, Liber, and Libera. Like Ceres, Liber was another god of fertility and harvest. But Libera was Ceres’ daughter, Proserpina. Throughout time, the mythology of Libera merged with that of Proserpina. Proserpina’s Greek equivalent was Persephone.

Because of her high status, Ceres was also the patron or goddess of the plebeian elected official. In the Roman state, there was an office for plebeians, and this was called the Tribune of the Plebeians. It would help to keep a check on the higher classes’ power within the Senate.

The Roman goddess of harvest was so respected that the person selected in this office would get protection. It became law that it was against the gods and illegal to harm the person in this office. She was one of the 12 main deities of the Roman pantheon or Dii Consentes. But ultimately, she was the goddess of the common people.

She is credited for bringing the gift of agriculture to the people of the Roman world. Before then, they were only feasting on acorns and wandered about with settling. She is also linked to the discovery of spelt wheat, field plowing, growing from seeds, and much more. She was praised and worshipped at certain parts of the year to ensure a good and bountiful harvest.

Her myth is closely entwined with that of her daughter’s, Proserpina. Strangely, Ceres was impregnated by her own brother, Jupiter. There are many stories of his ‘indiscretions’ with various goddesses and mortals. Proserpina was Ceres’ only daughter. There doesn’t seem to be much about Ceres’ sexual relationship with anyone else.

Proserpina was taken from her mother by the god of the underworld, Pluto. Ceres, in an act of revenge and sadness, took it out on the harvests during certain parts of the year. It is the story of the Seasons, and who better to control them, than the goddess of grains herself?

The Beginning of Ceres’ Story

Ceres was one of six children. Her siblings included:

Their parents were Saturn and Ops. At the beginning of time, Titans populated the cosmos. But they struggled, for the world was chaos, and they could not bring it under control.

At the time, a god named Caelus ruled the universe. He was a god of the sky, and he had a son named Saturn. Eventually, Saturn overthrew his father and took control of the cosmos. He mated with a goddess named Ops. Together they had six children. But because of what he did, Saturn was always afraid that one of his children would also overthrow him.

How was Ceres Born?

Saturn was so worried about being overthrown that he ate his children as soon as they were born, one by one. But he only got to five before his wife, Ops thought of something. She wrapped a rock in a cloth, hoping that Saturn would confuse it for a baby. Luckily enough, he did, and Ops hid Jupiter away.

Once the rock hit Saturn’s stomach, he threw up, the other five children flew out, still alive! After years of battling the Titans for years, Saturn’s children defeated them. They brought order back to the Cosmos.

The Tale of Proserpina’s Abduction

Many of these stories were recorded by Roman poets. A lot of the mythology we know today was written by the poet Ovid. Ovid’s retelling of Ceres and Persephone/Proserpina is one of the most well-known. Even those unfamiliar with Greek or Roman mythology will most likely know this story.

Ceres is usually pictured as a young woman. Yet she was not connected to love or sexuality like her fellow goddess, Venus. She did, however, mate at least once with her own brother Jupiter, resulting in a daughter. They named her Proserpina, and she was a beautiful young woman, known for her purity.

The god of the underworld, Pluto, was living in solitude. Venus could tell how lonely he was, and so she took pity on him. She told her son Cupid to go and visit him for a little company. When Cupid was there, he shot Pluto with his arrows, and Pluto’s longing for love grew.

Then, he returned to earth, and he saw Proserpina. He fell in love with her beauty (even though she was his niece) as he watched her on the Isle of Sicily. And so, he kidnapped her, taking her back with him to the underworld. Understandably, Ceres was furious. She didn’t know what had happened, and she began to search the world.

Origin of the Seasons

The story states that she couldn’t find her, but she ended up on the Isle of Sicily. It was there that she found Proserpina’s belt. To take revenge against them, she put a curse upon their harvests. The gods from on high saw Ceres’ motherly pain and took pity on her.

Jupiter sent word to Pluto that he must release his daughter back to earth. Pluto agreed but under one condition. Proserpina could return but only if she hadn’t eaten anything from the underworld garden. Unfortunately for Proserpina, she had already eaten seven pomegranate seeds. So, she couldn’t be released. 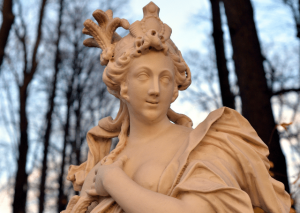 Ceres was heartbroken, but the gods didn’t give up. Eventually, everyone came to a compromise. Proserpina could split her time between the world and the underworld. She would spend half her time on land in spring and then half in the underworld in winter.

This story represents the changing of the seasons. Ceres was so sad about her daughter being away from her, so she would stop things from growing in the winter. But once she returned to earth, Ceres would allow things to grow again. The bountiful Spring would begin. Because of her undying love for her daughter, Ceres is also the goddess of motherhood.

Festivals of the Grain Goddess

The Romans celebrated Ceres on her own or with other gods or goddesses. The first festival was held in January. It was to make sure that Ceres would protect the seeds as they were sown. The people hoped she would lead them in growth to a good harvest in spring. The next festival took place on April 19 called Cerealia. The third, named Ambarvalia, took place in May.

The festival in January marked the beginning of the planting season. The people gave sacrifices to Ceres, hoping that she would give them their blessing. Usually, this sacrifice was a pregnant pig. Even though this goddess was a proponent of life and fertility, Ceres didn’t like pigs. They would tear up plants and roots, undoing all her good work.

In Cerealia, there would be a festive gathering of games and celebrations. There was a race in the Circus Maximus, and there was the releasing of foxes. These foxes had a torch on their tail, and that would end the festival. All the festivals would be overseen by plebeians as Ceres was their patron goddess.

While she is young, Ceres is not presented as very beautiful. She is more a plain-looking goddess, for her focus lies elsewhere. In artwork, she is often depicted amid her search for her daughter. So, she might be carrying a torch as well as her staff. She might also ride in a chariot made of snakes.

Many representations show her with piles of grain, crowns of wheat, or fruit. With the growing interest in mythology as time went on, her image was created many times.

Ceres’ symbols are her staff, her torch, and the piles of grain. While she was the goddess of crops, she was mainly linked to that of grains or cereals, hence her name. Her staff showed her connection to the earth as well as the great power she possessed in the pantheon.

Her torch or torches represented her urgent search for her daughter. But they could also mean enlightenment.

As with many gods and goddesses of days past, Ceres’ influence still lives on. Her name was the origin of the word “cereal”, which we all know and love today. She also was the inspiration for the name of the discovered dwarf planet, Ceres. This planet was discovered in 1801 by Father Giuseppe Piazza.

The element cerium was also named after this goddess. It was discovered simultaneously by various scientists from different parts of the world. One can also find statues of the goddess of grains in multiple cities.

She stands proudly atop the Chicago Board of Trade Building. One can also find her as well as the Capitol building in Jefferson City.

Check out the list of all the things covered in the article:

Ceres was the goddess of all things growing. The Romans depended on her happiness for a bountiful harvest. She was the first goddess to have animals sacrificed in her name. Her festivals were full of frivolity, cheer, and hope.

As the goddess of the plebeians, she was the patron of the common folk. And yet she was still considered one of the most important gods of the pantheon. She showed her love for her daughter by mourning her loss for half the year. She wouldn’t allow things to grow to portray her motherly devotion.

With an interesting origin story and dramatic ‘life’, it’s no wonder that Ceres is still remembered. Her statue and image are found all over the world. It’s especially found where there are buildings related solely to harvests and agriculture. People may still believe that she can bring health, wealth, and prosperity to our lands.