Neptune | God of the Sea 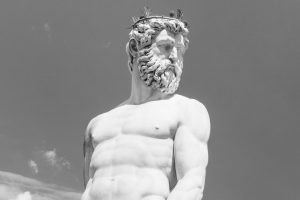 Neptune, god of the sea, was Jupiter’s brother in Roman mythology. He is also the god of fresh waters on earth as well as the patron of horses and horse racing.

Neptune is Poseidon’s Roman name, and Poseidon and Neptune are exact copies.

This article covers Neptune’s origin, his powers, and his effect on Roman life.

Who Is Neptune in Roman Mythology?

Neptune is the Roman god of the sea and waters in general. His Latin name was Neptunus. Another name given to him was Neptunus Equester for his connection to horses. Horse racing was a popular sport in Roman times. Additionally, the sea was key to Rome’s success, so one can imagine the position that Neptune held.

Strangely though, despite his high status, he was never considered a ruling god. He didn’t have the same political power that the other gods in the Roman pantheon did. There is some debate over the origin of his name, and there are two options. One of them is the root word, neptu, which means moist/wet, and the other is the root word nebh, which could mean cloud, fog, or mist.

Either way, both of these work due to Neptune’s watery domain. He is also in control of storms, so his name could either mean, “The Moist One” or “The Cloudy One.” He was in charge of all waters on earth and could summon storms in his anger. He lived in the Mediterranean Ocean in a golden castle with his wife Salacia and their children.

How Was Neptune Born: The Origin of Neptune

Neptune was one of five children born of Saturn and his wife Ops. Saturn overthrew his father to take power over the universe. His siblings were other powerful gods and goddesses in the Pantheon, including:

However, Neptune’s father was worried that one of his own children would overthrow him just as he had done to his own father. So as soon as the babies came out of Ops’ womb, he swallowed them one by one.

But by the time she was pregnant with Jupiter, Ops disguised a rock as a baby and gave it to Saturn to swallow. When the rock hit his stomach, he threw up all his children, keeping them from their demise.

The children worked together to overthrow Saturn and defeat the Titans. In their victory, they split up the sections of the earth to have as their domain by drawing lots. Jupiter, originally the youngest, became the oldest and most powerful. Pluto took the underworld, Ceres took the plants, Juno and Vesta took over the matters of the people and the home, and Neptune took the watery realm.

– The God of the Sea’s Wife and Children

Neptune lived beneath the sea with a sea nymph named Salacia, goddess of saltwater. Together they had four children named Benthesikyme, Triton, Rhodes, and Proteus. Of Neptune’s children, Rhodes and Benthesikyme are relatively unknown, while Triton and Proteus were more well-known. Triton was also a sea god, and Proteus had the ability to see into the future.

The story goes that Neptune saw his wife Salacia dancing on an island. He instantly fell in love with her and asked her to marry him, but she rejected him, and he left her. He didn’t stop, though. He sent a dolphin to seek her out again.

He succeeded in convincing her, and they got married. Neptune’s wife was the Roman equivalent of the Greek nymph Amphitrite. And because of the dolphin’s success, Neptune gave it a place of honor and made it immortal. He made it a constellation called Delphinus, and Neptune is often depicted with dolphins in art. 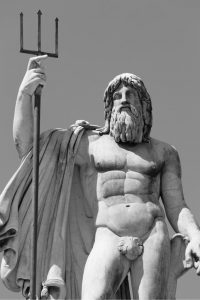 Neptune is usually shown as an old man with white hair and beard. He was often depicted carrying a trident, a three-pronged, metal spear. You might recognize him in characters like Ariel’s father in “The Little Mermaid.” Although he is the god of waters, he is not shown to have a fishtail; instead, he is in human form.

However, his son Triton was more like a merman. In other artworks, Neptune might be portrayed with horses as well as horse-racing equipment. According to myth, he would travel across the sea in a horse-drawn chariot. Even before he was connected to the sea, Neptune was tied to horses.

He might even have been born in horse form. This could be related to Neptune’s characteristics of being rather violent and wild. He was thought to be a little cantankerous, unlike his male siblings. His angry behavior matched that to the unpredictable nature of the sea.

Neptune Myths: All About the God of the Sea

His Greek counterpart turned out to be more popular in the Western World, but there were still a few stories in which Neptune took the main role. In most accounts, he wasn’t behaving well, even though he doesn’t seem entirely heartless.

Like his older brother, Neptune was a little bit of a playboy. He was married yet had various extramarital affairs. Also, like his brother, he often took his pleasures without the consent of the other party, including his sister Ceres.

He was interested in her for a long time, and he made many efforts to push his advances upon her. According to one story (and there are varying ones), he turned himself into a horse and raped her, which resulted in a daughter.

Could this mean that Prosperina was the daughter of Neptune?

It’s unclear, but also, this story may be about his first creation of the horse.

– Neptune and the Sea

This story, like many others, comes from Ovid’s “Metamorphosis.” Neptune used his power over the waters of the earth by recreating its landscape. One day, Neptune thrust his trident into the earth, causing the waters to rise and cover the entire earth.

Not unlike the Bible story, the earth was “drowned.” It cleansed the earth, and only one woman and one man were left alive. Eventually, Neptune let his son Triton blow on his conch horn, forcing the waters to return to their place. They did, and what they left behind was a newly changed earth.

It was as if Neptune created a new beginning for the earth. It’s unclear why he started the flood or if it was because the world was evil and needed cleansing, like in the Bible.

It seems that almost everyone was involved in the founding of Rome!

One of Neptune’s nieces, Minerva, can also claim a hand in it. Juno, his sister, can also claim part of it. She was angry at Aeneas, and he was heading away from his home country in order to make it to Italian shores. Juno called for a storm to be brought to rage against his ship, preventing safe harbor.

Neptune was angry that his sister was encroaching upon his domain. He calmed the storm and allowed Aeneas safe passage. Another time when Aeneas was leaving his lover, a storm raged up again on the sea. He called Neptune for help.

Neptune calmed the storm again, although this time, he called for death as payment. He wanted the life of Aeneas’ captain, Palinurus. Palinurus died because he fell asleep at the wheel of the ship. Once he fell under the waves, the sea calmed, and Aeneas made it to Italy. With Neptune’s aid, the founding of Rome could be put into action.

Minerva was a daughter of Jupiter, thus Neptune’s niece. Her Greek counterpart was Athena, and she and Neptune had a few run-ins. One time, she caught Neptune and a priestess named Medusa kissing in one of Minerva’s temples. That’s why she cursed Medusa with a head of snakes.

Another time, Neptune and Minerva had a mighty competition to decide who could name the city of Athens. The competition was that each must produce the most beneficial gift to mankind. Neptune, with his trident, created a horse, and Minerva created an olive tree that sprung from the ground. Therefore, she won the prize and was able to name the city.

Worship of the Ocean God

He wasn’t as widely worshipped as other gods or even Poseidon, but he did have one temple in Rome. This was Circus Flaminius. The Roman people would sacrifice bulls to Neptune. He was one of four gods that would receive this particular sacrifice.

Neptune had one festival dedicated to him, and it was called Neptunalia. It took place at the end of July, and because it was during the hot and dry period, it was a festival asking for rain. It was also where ludi occurred. Ludi is a gladiatorial competition that involved gruesome fighting, including animal fights.

Even though he’s not as well-remembered as Poseidon, his name is still given to the eighth planet from the sun. It was named in 1846, and that was because of its blue color. Two of its moons share the name of his sons, Triton and Proteus.

Here’s a summary of what we’ve discussed about the god of the sea:

Neptune didn’t wield as much power as his other siblings. He didn’t control thunder, dead souls, plant life, or even the matters of the home. However, he controlled water, and even though he wasn’t given much political power, he had this frightening strength.

Even now, as we travel upon the sea or any form of water, we should be careful not to awaken Neptune’s wrath.