Vulcan | The God of Fire and the Forge 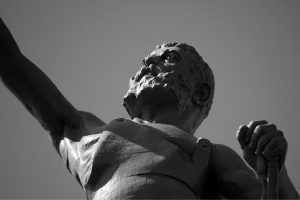 Vulcan, god of fire and forge, is the ugliest god in Roman mythology. He has rather a sad history starting with hatred from his mother.

However, Vulcan was a skilled blacksmith, and so he’s the patron of smiths and artisans.

Read on to find out how this volcano-dwelling god became the best in the business but still had Mommy issues.

Who Is Vulcan in Roman Mythology?

Vulcan is both the Roman god of fire and the forge. He is one of the four children of Juno and Jupiter and is the Roman version of Hephaestus. Unfortunately, he was an ugly, deformed child, which brought on the wrath of his mother. That would be the cause of the rest of Vulcan’s problems.

Despite his sad beginnings, Vulcan’s powers lay within the forge. He became a skilled craftsman, which helped him stand out amongst the gods, despite his ugliness and deformity. He was raised near a volcano, and Vulcan’s forge was located underneath the volcano, hence the name “Vulcan.”

He was adapted from an Etruscan god whose name was Sethlans. Later, his stories and attributes became exactly those of Hephaestus, the Greek god of the forge. Even though it made Juno unhappy, Vulcan went on to play a major role in Roman mythology. He even holds a place in the Dii Consentes, one of the twelve main deities of the Romans.

– How Was Vulcan Born: Mythological Origin of Volcano

Vulcan was one of the four children of Jupiter and Juno (shockingly born in wedlock!). His siblings were Mars, Bellona, and Juventas. After Vulcan was born, he was very red-faced and surly, and Juno didn’t like it. She thought he was too ugly that she threw him down from the top of Mount Etna, the largest active volcano in Europe.

He hurt his leg, and it became deformed, increasing his ugliness. After his fall, his mother left him to be raised by nymphs. He spent his time by the sea and at the base of the volcano. One day, he found a lump of warm coal, and he was fascinated by it. It kept his attention so much so that he put the coal into a clamshell and took it home, watching it.

He became skilled in the ways of the fire after practicing with the coals that he found. Unfortunately, because of his sad birth, he was an angry child and grew into an even angrier man. He kept to himself and was known basically as the ugly god who was a skilled blacksmith. He proved himself useful to different gods, but he also enjoyed getting revenge.

Myths of the Roman God of Fire

Vulcan grew up in the shadow of a volcano. It makes sense that he was able to use the power of the volcano to create beautiful tools and jewelry. He eventually was the one who created Jupiter’s scepter as well as his lightning bolts. He also created Mercury’s metal winged helmet, which helped his half-brother deliver his messages.

As Vulcan grew in his skill with smithing, he tried to make all kinds of things. He made silverware, tools, and jewelry. He even made a beautiful silver and sapphire necklace for his foster mother, Thetis, who was a nymph. Thetis went to a dinner party, and it was there that she met Juno.

Juno was impressed with the necklace, and she asked Thetis where she got it. Thetis told her, and Juno was furious. She didn’t like that the son she’d rejected had become a very talented craftsman.

Vulcan’s half-sister, had a rather interesting birth story, unlike her brother. While still in her mother’s womb, she had been swallowed by her father, Jupiter. Jupiter was afraid that he would be overthrown in the same way that he had overthrown his own father. But both Minerva and her mother were not to be defeated. They gave Jupiter terrible headaches.

These headaches ailed Jupiter so that he called upon his son Vulcan to assist him. Vulcan came to his father’s head, bringing with him an ax and tongs that he had created in the fire. He used the ax to cut open his father’s head and the tongs to pull Minerva out. She was full-grown, dressed in armor.

Some stories state that Vulcan fell in love with her immediately. However, Minerva was known as a virgin goddess, and she rejected his overtures.

Even though one could not find two more opposite gods, Vulcan and Venus were married. Vulcan was the ugliest god, and Venus was the goddess of beauty, love, and sex.

Unfortunately, the marriage was not a happy one, and from the stories, we know that it was a sexless one. Because of this, Venus sought love and sex elsewhere, but it vexed Vulcan whenever she did so.

Among her lovers were Mercury and Mars. Mars was Vulcan’s full brother, and Mercury was his half-brother. One day, Mercury found Mars and Venus together in bed, and he flew away to go and tell Vulcan what he saw. Vulcan was so angry that he caused sparks to fly from Mt. Etna, and he created a plan of revenge.

He didn’t go and call out the lovers just yet. Instead, he hatched a plan, and he wanted to enact it. He built a net that was almost invisible to the human eye, and he laid it over the bed. The next time that Venus and Mars went to bed together, they were caught. Vulcan called the other gods to come and look upon their humiliation. 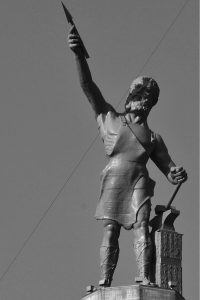 Vulcan was the god of fire, and eventually, mankind stole this secret of fire, so Jupiter set out to punish them. Prometheus was the Titan who gave the secret away.

Jupiter thought that mankind should receive a poisoned gift because of their thievery. Vulcan had an idea, and he created Pandora out of clay. She was technically the first human woman.

She married the Titan, and then she was given a box as a gift for mankind. The box had all things terrible like disease, misfortune, etc., inside of it. She was told not to open it, yet her curiosity overtook her.

She opened it, spreading all the evil and misfortune throughout the world. When she closed it, there was one thing left inside–hope.

His own mother threw him over the side of the mountain because she didn’t like the way he looked. Understandably so, Vulcan had some mother problems. He planned his revenge, and he used his skill as a blacksmith to execute it. One day, he created a special kind of chair, made out of silver, gold, and pearl.

However, this chair had a special mechanism that would trap whoever sat on it. Juno accepted the chair, and instantly got caught when she sat on it. She screamed and tried to fight, but the chair only held her tighter. Vulcan kept her trapped for three days, and she couldn’t do anything; the chair’s grip was so tight.

Vulcan had one request. He would release his mother if she would make the beautiful Venus his wife. Jupiter got involved, since he was the god who could command the others, and he agreed.

Dionysus came, got Vulcan drunk, and brought him back to his parents. They agreed to the plan, and they gave Venus in marriage and released Juno at the same time.

Vulcan is the patron of blacksmiths. So his symbols are tools related to smithing: hammer, tongs, a forge. He was also deformed. So in art, he might appear less than perfect, compared with the other gods. He also was ugly as opposed to the beautiful gods; artists might have attempted to make him appear unattractive.

Because of his skills in the forge, he might also appear in artworks with the items that he created. These include Zeus’ lightning bolts, an ax, and Mercury’s winged helmet.

Worship of Vulcan, the God of the Forge

A shrine named “Volcanol” was built to Vulcan in the 8th century BC. Additionally, the temple of Vulcan can be found in Rome.

There was one festival set aside for Vulcan, and it was called Vulcanalia. It took place on August 23, and the people would light candles and fires. They would throw fish and other animals in the fire to keep away wildfires during the dry season.

Vulcan is surprisingly quite well-remembered. Or perhaps it was more his name rather than his personality. One can see this name in Star Trek, where Vulcan is the name of the planet of a certain extraterrestrial race. Think Spock.

You can also see Vulcan’s name in the word volcano as well as in “vulcanized rubber,” which is the practice of hardening rubber. There is also a statue of Vulcan in Birmingham, Alabama, which happens to be the largest cast-iron statue in the world. 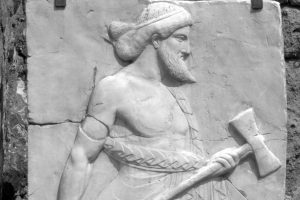 Vulcan was the ugliest and maybe the angriest god but for good reason. Let’s sum up the main points we covered about him in this article:

Vulcan was the god of fire and the forge in Roman mythology, and he was the Roman version of Hephaestus. He was the ugliest god, and despite his skills, he was probably the most scorned of the gods.

Even his wife didn’t love him and couldn’t stand to be around him. And yet, he has the story of overcoming the past and pushing forward against all odds. His mother hated him from the beginning, shunning him from her family, but in the end, he had his revenge, and he is the representation of strength, renewal, and putting the past behind us.