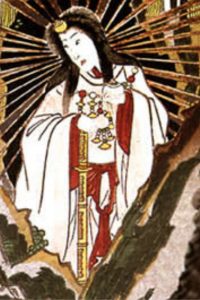 Amaterasu is the goddess of the sun in Japanese mythology. Because her parents are creator deities, she ended up with the rulership of the heavens. Through her, the Japanese Imperial Family was born, and she gave them the right to rule. Read on to find out how she got her position as well as why she banished her husband.

Who Is Amaterasu in Japanese Mythology?

Amaterasu, (Kanji 天照皇大神) or her grander name Amaterasu-ōmikami, is the Japanese sun goddess and the ruler of the heavens in Japanese mythology. Her name means “shines from Heaven,” and her longer, more royal name means “the great and glorious kami who illuminates from Heaven.” She had an even grander name, which was Ōhirume-no-muchi-no-kami, which means “the great sun of the kami.”

A kami is a god or spirit in Japanese mythology, and Amaterasu was sometimes seen as the queen of the kami. She has earned the title through her parentage, and in one of her myths, we discover how the role was passed to her. Her father, Izanagi, remains as her advisor in her royal role. She married her brother, but his bad nature forced them to separate later, creating day and night.

Amaterasu had many roles in Japanese society during ancient times and held many titles. Amaterasu was a Shinto deity, and she represented the sun as well as embodied it and all its qualities. Amaterasu had a role in many myths, but they were mostly about her entanglements with her feisty brothers. Because of their problems, she ended with the great role she still holds today.

Because of her importance in Japanese mythology, she held many official roles. She was, of course, goddess of the sun, but she also served as a goddess of state and mother of the imperial family. As a goddess, she basically was the sun and portrayed its traits. She would provide light, energy, and nourishment to her people and represented the order that sunlight brings to the world.

Order and purity were very important traits in that time, and she embodied those concepts throughout her rule. As for being a goddess of state, Amaterasu was around even before Shinto became the state religion in Japan. Once it was, she took the head of its rule, which is why the Japanese Imperial family descended from her. Like other countries and religions, the Japanese used their religion to give them rights to create their government.

They believed in the divine right to rule, given by Amaterasu. That’s how the Japanese Imperial Family got their power and continued to have it for many, many years. She was the goddess of divine justice, and emperors would continue to honor her and worship her throughout their rule. She remained as their queen of heaven.

Amaterasu had multiple weapons that she sent down to the Japanese Imperial Family. These weapons/items are still in possession of the family today. They include:

These weapons and items make up what is called the Imperial Regalia of Japan.

Origin and Family of the Sun Goddess

Amaterasu, along with her brothers, had a unique origin story. They were born from the face of their father as he washed off in a special cleansing ritual after visiting the underworld. She was born to the creator god Izanagi just after seeing his dead wife in the Land of the Dead. Her brothers were named Tsukuyomi, the moon god, and Susanoo, the god of sea and storms.

She later married her brother Tsukuyomi, and the children she had were likely from the union with him. One of her children was Ame no Oshihomimi. Her great-great-great grandson Jimmu became the first emperor of Japan. Thus, her association with the imperial family began.

Amaterasu’s myths are primarily about her relationship with her stormy and feisty brothers. She turned out to be her father’s favorite or perhaps his most well-behaved child. She was rewarded with power and glory. 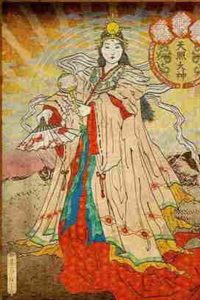 Amaterasu’s father was a creator god along with his wife, Izanami. With Izanami, Izanagi was the father of many other kami or gods in Japanese mythology. However, in their first marriage attempt, Izanami made a dreadful mistake by speaking first. Therefore, the children they had after that were deformed.

Once they got it right, their progeny was many deities, but Izanami’s final child was a fire god who burned her to death. Saddened by the loss of his wife, Izanagi raced to Yomi, the Land of the Dead, to bring her back to the land of the living. When he got there, she looked normal, but once he shone a light on her, he could see that she was already rotting, full of maggots and demons. He raced away in fear, and Izanami yelled after him angrily.

He had to wash off the impurities from the Land of the Dead, so as soon as he could, Izanagi jumped into a hot spring to clean himself. As he was washing his face, something miraculous happened. Out of his face sprung three gods: Amaterasu and Tsukuyomi from his eyes and Susanoo from his nose. He believed they were extra special kami. So he appointed them as the three leaders of heaven, but even then, Amaterasu was the head.

Because Amaterasu emerged from her father’s eye shining with the light of the sun, and Tsukuyomi reflected his sister’s light, they married. They each ruled over various sectors, but where Amaterasu was bright and joyful, Tsukuyomi was dark and brooding. They couldn’t get along because Tsukuyomi was so much of a stickler for order that he often went a little extreme. Amaterasu put up with it for a long time, but eventually, she got tired of it, especially after one particular feast.

Amaterasu and Tsukuyomi were invited to a feast/banquet by the goddess of food, Uke Mochi. Amaterasu couldn’t attend, but she sent Tsukuyomi to take her place. While there, Tsukuyomi was horrified when he saw the goddess Uke Mochi pull the food for the feast out of her various orifices. When she began to pull food out of her rectum, he had had enough. He couldn’t bear to see such disgusting and disorderly things, and so he killed the goddess.

Once Amaterasu heard about what her husband had done, she was furious, and she told him she never wanted to see him again. She banished him, and thus she created the separation of day and night. Moon and sun would never meet again. We can see them still today, Tsukuyomi chasing his wife across the sky, hoping to meet up with her and apologize for his actions.

– The Stormy Brother Susanoo and Amaterasu

Amaterasu was the firstborn, and while they shared the duties to rule heaven, she was truly the head. Her younger brother, who had a wild and unruly temperament, didn’t like that this was the case. He eventually became so mean and badly behaved that Izanagi banished him, and then it was the second son who was banished. Before he left the heavens, however, he went in search of Amaterasu to say goodbye.

Amaterasu was suspicious of this kind of action because they always fought, and he had never treated her so kindly before. She presented a challenge to Susanoo, and he agreed. They would each take the other’s object and produce kami. The most kami that were produced would win.

Susanoo took her necklace and produced five gods, and she took his sword and produced three goddesses. At the end of the challenge, Amaterasu claimed that she’d won because Susanoo used her necklace to create the gods. Susanoo was so furious that he flew into a wild rage and began to destroy things around him. He ruined her rice fields, killed her horse, and threw it, killing one of her handmaidens, and Amaterasu fled in fear and grief.

– Amaterasu and the Cave

Amaterasu went away to hide in a cave. In the meantime, Izanagi officially banished Susanoo, and he fell from the heavens where he had his own special story involving a dragon. Amaterasu was sad about Susanoo’s reaction and ashamed that she had been the cause of it through her cheating. During her time in the cave, the earth experienced darkness and cold because she was no longer giving her light.

The cave she fled to was called Ama-no-Iwato, “the Heavenly Rock Cave in English.” Because she was away and the world was dark, Japan experienced its first winter. The gods saw what was going on, and they were so desperate to get her back to her sunny role. They went to the cave’s entrance and begged her to return, but she refused, and she even put a rock in the entrance to keep them from returning.

It took about a year until a wise god named Omoikane decided that they would be able to tempt her to come out by throwing a very loud and grand party. There was dancing and music, and it was so loud that Amaterasu poked her head out to see what was going on. At the cave’s entrance was a mirror, and when she looked into it, she could see her grand light, and she remembered what she was meant to do. Omoikane rolled the rest of the stone back, and Amaterasu’s light flooded the world again.

– Reconciliation for Amaterasu and Susanoo

After she was reinstated in her position, bringing light and life to the world, she apologized to Susanoo for what she’d done. He accepted. While he was down on earth, he helped save a woman from death from a sea dragon. When he killed the dragon and cut him open, a sword was revealed.

This special sword he gave to Amaterasu as a gift of reconciliation, and she accepted. It is part of the weapons of the Japanese Imperial Family.

Amaterasu’s symbols could be many things. She was the symbol of the sun, and her other symbols were the mirror, the necklace, and the sword given to her by her brother. One might even consider a cave as a symbol of Amaterasu.

There is an Amaterasu statue at this shrine and her other symbols and the Imperial Regalia. The other shrine is called Amanoiwato Shrine in Takachiho, Miyazaki Prefecture. It is located near the cave where Amaterasu hid herself and her light for so long. 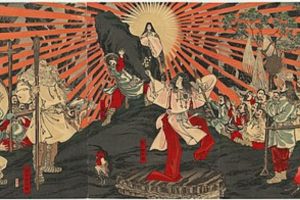 Take a look at the main points covered in the article above about Amaterasu.

Amaterasu is of great importance to Japanese history and spiritual life. She was, in essence, the sun, and she represented all the good aspects of it. It is just too bad that her brothers couldn’t live up to the beautiful example she set as a leader. Even today, she still lives on and rules the heavens, her power not having dwindled in all these years.