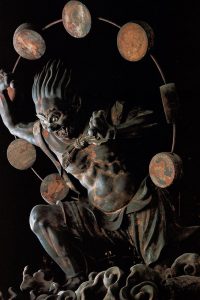 Raijin is the fearsome god of thunder in Japanese mythology. Raijin has the power over thunder, lightning, storms, and rain. He has a great connection to death, and even though he brought rain, he would leave destruction behind. Read on to find out just how fearsome this god was.

Who Is Raijin in Japanese Mythology?

Raijin is the Japanese god of lightning and thunder, and his brother Fujin is the god of the wind. Together, they wielded wild, chaotic storms. Raijin could fly across the sky on storm clouds, and he would shoot down lightning bolts at anyone he pleased. He was a very well-known god, but he had a terrifying appearance, and people weren’t always sure where they stood with him.

Raijin was part of the Shinto group of deities, but he was also seen in Buddhist tales as well as the artwork. Just by looking at Raijin, one can tell that he had a connection to Yomi, the Land of the Dead. He wore a crazed smile, thick, dark eyebrows, covered in muscle, as well as wild hair. He looks almost demon-like in his appearance.

Raijin had many powers like using a drum to make thunder, protecting temples and shrines, and using lightning and rain to create harvests. He was a trickster god and used his powers to do what he liked. He didn’t listen to humans in power on earth, but he was subject to other gods in the pantheon. Raijin has a few fascinating tales to tell, especially how he came about.

Origins and Family of Raijin

Raijin was one of the children born to Izanagi and Izanami, two of the Japanese creator gods. However, Izanami died from wounds from a dragon fight, and Raijin was born while she was dead in Yomi. Because of that, he was different from his siblings Amaterasu, Tsukuyomi, and Susanoo. According to one folktale, he had a deep connection to the underworld, and it was a matter of great bitterness to the god.

Later, Raijin had a son named Raitoro. Raitoro himself was also a thunder god.

Other Epithets of Raijin

Raijin had several names he went by, including:

Myths of Raijin, God of Thunder

Raijin appears in a couple of myths and folktales. He was credited for a few famous storms in Japanese history as well. He was beloved by those who lived their life by rain, such as farmers, but perhaps feared by others.

– The Birth of Raijin, continued 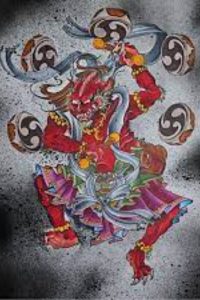 After Izanami’s death, her husband Izanagi came after her in the Land of the Dead to bring her back to the living. When he got there, he saw that she looked normal, but when he shone a light on her, he could see maggots eating her flesh. In horror, he raced out of Yomi, and he put a boulder at the entrance to Yomi to keep her from escaping.

Izanami was furious, even in her dead state. She had Raijin while still dead, and she ordered her son to chase after his father. He left Yomi, and he brought with him all the death and chaos and destruction that was in the land of the dead.

During times of drought, the ancient Japanese people would think that the god of thunder had been imprisoned and unable to do his job. At one point in mythology, Raijin was being so bad that Sugaru the God-Catcher, caught him and put him in prison. While in prison, Sugaru asked Raijin in the name of the emperor to give himself over to his imprisonment willingly. Raijin laughed and said no.

And then, Sugaru asked the Buddha of Compassion to help convince Raijin to be taken to the emperor. Raijin eventually agreed. After that, Raijin was commanded to stop being so chaotic and destructive and only to bring rain to Japan. He did so, but it didn’t last forever.

Some stories state that Raijin and Fujin worked together in 1274 and 1281 to bring out typhoons. These typhoons sunk the Mongol ships and prevented invasion on Japanese soil

Some folktales say Raijin doesn’t like children who show their belly buttons. He takes them and eats them. An explanation might be that he’s jealous of humans and their natural births. He was born to a rotting corpse in the underworld

Another tale states that if one of Raijin’s lightning bolts struck a crop, a bountiful harvest would follow

Raijin’s Connection to Other Gods

Mythologies are not in a vacuum. Many across the world have various similarities between their gods and goddesses. Raijin is no exception. This god of thunder and lightning has similarities to:

Because he was such a well-known and famous god, he had much artwork representing him. But his most renowned representation is in Kyoto at a Buddhist temple called Sanjusangen-do. Statues of both Raijin and his brother, Fujin, guard the entrance to the temple. These statues are some of the most beloved in Japanese artwork.

And this representation is a perfect example of Raijin protecting temples and shrines.

Raijin has appeared in various media: 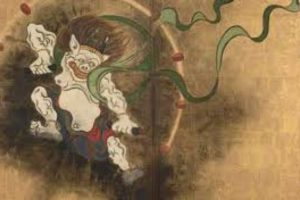 Take a look at the main points covered in the article from above:

Like other thunder gods, Raijin was powerful and fearsome, but unlike others, he also brought an aura of death with him. He might be more like some Aztec gods where people weren’t always sure where they stood. He might provide life-giving rain one day and then death-giving lightning and storms the next. While this made him interesting, it also made him terrifying, and that exactly, we can assume, was his intention.