Inari: The Androgynous Protector and God of Agriculture 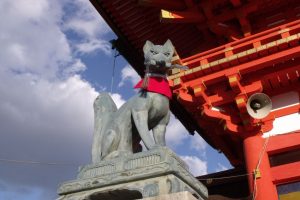 Inari is the god of prosperity in Japanese mythology. Because their characteristics and attributes mirrored the changes in Japan, Inari is neither male nor female. They are more like an androgynous figure, but they are the most famous Shinto deity in Japan. Read this to discover how many shrines are dedicated to them.

Who Is Inari in Japanese Mythology?

Inari has taken on many forms, but they are the god of prosperity in Japanese mythology and the Japanese fox god. They are also the Japanese god of rice, tea, agriculture, and the protector of foxes. As time went on, Inari also became the patron or god of smiting and industry. The foxes they protect are called kitsune, and these foxes are their messengers.

Inari’s name is a shortened form, and its original Kanji form is 稲荷, which together means something like “rice cargo” or “carry rice.” Inari’s other name is Inari Okami, which means “The Great God Inari.” Another name is Ta-No-Kami, which means “God of the Paddy Fields.” All names are appropriate to the Inari deity.

Inari is a very popular deity, and they have shrines all over the country dedicated to them. More than a third of all the shrines in the country are dedicated to Inari. They do not appear in Japanese mythology, and yet their legacy remains. Inari is one of the deities who has changed and adjusted to the evolving times in Japan’s history, so they are worshipped and revered today.

Inari is a fascinating spirit or kami because they are so adaptable to various religions. It was seen in both the Shinto and Buddhist faiths and related to deities in Japanese and Indian Buddhism. Instead of dividing people, Inari has been a god of unity because people of many faiths could worship this god. It was all the same deity, just under different names, having different attributes.

Since they don’t appear in myths, we don’t really know the background of Inari’s origin. This deity, however, has been “around” for over a thousand years. As time went on, Inari changed so much that they sometimes appeared as other gods or goddesses, and it was a little confusing. In some tales, Inari was married to Uke Mochi, the goddess of food and agriculture.

But Uke Mochi was killed by Tsukuyomi, the moon god and one of the leaders of heaven. After that, it is believed that Inari might have taken over her role as god of agriculture, rice, and tea.

Inari and Foxes: What’s the Connection?

The fox is the symbol of Inari, and its name is kitsune in Japanese. They are a prevalent symbol in Japanese tales, and they are female spirits. They are clever, cunning, and they use their intelligence to help or to hurt. There can be both bad and good kitsune, and the ones assisting Inari are said to be only good.

The foxes protect Inari and bring them messages, and it is akin to sacrilege to harm one of these foxes. Outside of the deity’s shrines, statues of foxes can be seen, which continue to protect. When thinking of Inari in relation to foxes, she is usually mostly seen as a female or a goddess.

In the early days of Japan, it was agrarian, and so Inari was the god of that kind of prosperity. Inari is the god of rice and tea, two fundamental parts of Japanese culture and society. When related to agriculture, Inari is again seen as female. In this case, she brings prosperity and a good harvest to the farmers.

Goddess Inari was also the goddess of anything produced from the crops that would come out of the harvest. For example, she was a goddess of sake because sake is made from fermented rice. And because rice and tea are such a part of Japanese culture, Inari is right there in the middle of it all, a central figure in the customs of Japan.

Things in the culture changed, and modernization arrived in Japan. Thus, Inari became the deity of prosperity not only in agriculture but also in industry and its success. Inari was central to success in business and enterprise. So, the deity also became important to craftsmen and smiths. 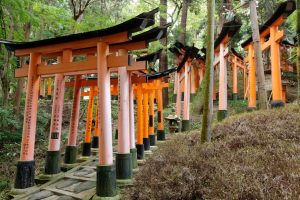 Sadly, there are no myths associated with this deity. But we have the history of how Japan viewed them over time and how they changed to keep fitting with the culture. Inari’s popularity grew during the Edo period, which was 1600 to 1868, but their importance began even before that and remained after. When a god can change and shift with the times, they are more likely to keep their name and legacy alive.

Historians believe that Inari existed in Japan even before Buddhism came to the country in the sixth century. But as soon as Buddhism came, it quickly blended with Inari; Inari became one of their most important symbols. When it was learned that Inari was the deity of rice and tea, they turned her into the god of prosperity and success. The worship of this god began to take place during this time at Fushimi, a shrine in Kyoto.

The Buddhist sect Shingon regards Inari as their chosen deity, and it has been so since they began. During this period, 794-1185, the festival of Fushimi began and gained great popularity with the people. The Japanese Imperial Family took on Inari as their deity, and so worship and reverence of Inari (as well as their shrines) spread all over Japan. No matter the change in history, rulers, or politics, Inari remained a popular, revered deity.

– The Influence of Inari in the Edo Period and Beyond

Inari’s popularity still held firm as the culture changed. Samurai had been ruling Japan, but now, during the Edo period, metalworkers and craftsmen began to gain power as the metal industry grew. Instead of being so agriculturally-based, Japan started to change to being gold and metal-based. Then Inari’s association with prosperity also included money, industry, smithing, and craftsmanship.

The god in this context was seen more like a male god, and he became the special patron of workers such as blacksmiths and swordmakers. He is said to guide the smith by helping his hammer to come down upon the metal. The Japanese idea of success shifted into this realm of building and industry. Of course, the god retained their old powers over agriculture but merely added on more as Japanese culture shifted.

In more modern times, Inari became connected to greater industry and corporations. The deity would be called upon to watch over the opening of new buildings and businesses. But the deity’s power of success is not just for groups and companies but also for individuals, even today.

The Shrines of Inari

Inari is the focus of more than one-third of the shrines in Japan. Inari shrines are called Inari jinja and are the most popular in Japan. All told, there are about 2,970 shrines dedicated to Inari in the country of Japan. The oldest of Inari’s shrines is in Kyoto at Fushimi Inari-Taisha.

And they are different from other shrines, making them look quite distinct. They have white stucco walls, red roofs, and vermillion gates. Then, of course, there are statues of beautiful foxes. Worshippers will come to these shrines and leave gifts such as rice or sake.

Inari and Other Gods

Inari has moved through time, culture, and history with ease. So there has been a lot of confusion about the deity’s true form and nature. There are a lot of similarities between this kami and others. Sometimes Inari is seen as one deity or a grouping of many. The god may have some connection to Uke Mochi, Izanagi, Izanami, and other creator gods linked to prosperity and agriculture somehow.

Some deities outside of Shinto that is related to Inari include:

Inari or their name or form as kitsune appears in many pop media: 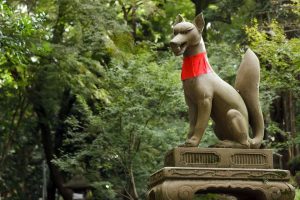 Take a look at the main points about Inari covered in the article below:

Inari is an incredibly special deity in Japanese spiritual life because of the way they have been able to retain their legacy in today’s world. Inari has been around for so long, and the deity is shrouded in so much mystery. Yet, many Japanese people still depend on Inari’s blessing and help to continue to bring them success and prosperity. The key was for Inari to change as Japan changed, and how many deities can say they were able to do that?