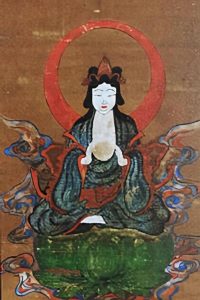 Tsukuyomi is the Japanese god of the moon and part of the Shinto deities. He is a proud, violent, and somewhat tragic figure because he is estranged from his wife, the sun goddess. He must chase her each night and day, and that is the relationship between night and day. Read more to find out just how Tsukuyomi became estranged from his beautiful wife.

Who Is Tsukuyomi in Japanese Mythology?

Tsukuyomi, or also Tsukuyomi-no-Mikoto, is the moon deity in Japanese mythology. The addition of no-Mikoto to his name means, “The Great God Tsukuyomi.” Tsukuyomi means something like “moon-reading,” and it is linked back to a long time ago in Japan when people would sit up and gaze at the moon and read poetry. He is like the moon, in that he is beautiful, serene, caring for order and justice, but he is often portrayed as an evil character in Japanese mythology.

He cared almost too much for etiquette and order, and he would use violence when necessary to help enforce it. He was a proud god, proud of what he stood for, and he was similar to his wife, the sun goddess Amaterasu, in that way. Like in many cultures and mythologies, killing was wrong and thus a breach of “etiquette.” Yet Tsukuyomi loved etiquette so much that he would take to breaking the rules to try and enforce them.

This contradiction seen within a deity is very common in various mythologies around the world. This could even be viewed as a portrayal of dualism, which is when something contains opposing beliefs or concepts. There is even some debate about whether we know the god was seen as male. Either way, the moon god got himself into trouble, and he would spend the rest of his days fighting to go back to what things were.

The Backstory of Tsukuyomi’s Parents

Tsukuyomi was born to Izanagi, one of the Japanese creator gods. He was born as part of a cleansing ritual after his father visited Yomi, the Japanese Land of the Dead. Izanagi went to reclaim his wife from the land of the dead, but he failed in doing so. He realized that she had become part of the dead, having consumed the food there.

This story is similar to the tale of Persephone in Greek mythology. So, when he realized the truth, Izanagi raced away from Yomi. He put a boulder at the entrance to keep her from escaping back into the land of the living. But he had to clean himself after as he had visited the land of the dead and was covered in impurities.

Birth of Tsukuyomi and His Siblings 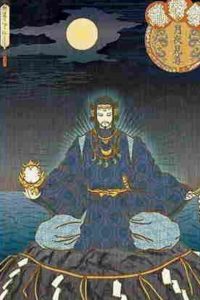 He cleaned himself in a hot spring, and while he was washing his eyes and nose, something miraculous happened. Three deities, or kami, were born out of his face. Amaterasu came from his left eye, Tsukuyomi came from his right, and Susanoo came from his nose. Izanagi declared them the most important of the deities and that they would rule the heavens together.

All three of them climbed the Heavenly Pillar, and they began to rule over the Heavens. Because of their perfect match, Amaterasu and Tsukuyomi were married. The sun goddess had children, but it was unclear whether these were Tsukuyomi’s. Some stories state that the Shinto moon god was the father of the Japanese Imperial Family.

But this is not known by all or agreed upon by all.

The proud and powerful moon god went by a few other names. These included:

Sadly, this god isn’t mentioned as much in Japanese mythology as many others, despite his fascinating tales. But he did have a critical role in the origins of day and night.

– Tsukuyomi and the Death of Uke Mochi

Tsukuyomi has one very famous myth after his strange, unique origin story. This was the death of another goddess and his involvement in it. Uke Mochi decided to have a bountiful feast to serve the gods, and it made sense because she was the goddess of food. She invited all the gods, but Amaterasu was unable to attend the festivities.

Instead, she sent Tsukuyomi in her place to represent them at the party. He arrived and found that Uke Mochi was going to create the food for the feast from her own body. To his shock and horror, Uke Mochi began to spit rice, fish, and other food out of her mouth onto the tables. She also pulled food out of the other holes in her body, including her rectum.

With Tsukuyomi’s penchant for fighting for order and etiquette, he was absolutely horrified. After he saw what Uke Mochi did to create the feast, he killed her on the spot. But he would live to regret it.

– Tsukuyomi and the Loss of His Wife

Amaterasu, his wife and sister, learned of the death of the goddess of food, and she was so saddened by her husband’s actions. She refused ever to see him again, and she left his side. It was more like the straw that broke the camel’s back because they didn’t always see eye to eye. While Amaterasu was all cheerfulness and light, Tsukuyomi was colder, more reserved.

She called him an evil deity, and she didn’t wish for him to return to the heavens. So, he became glued to the spot as part of the night. The story goes that he would chase Amaterasu across the sky every night but could never catch her. It would be his constant struggle to return to his wife, and because of his crime, night and day were created. 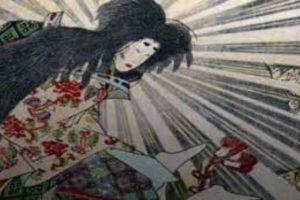 Tsukuyomi, although not mentioned very often in Japanese mythology, still held a key role. Take a look at the main points about this moon god covered in the article above:

Tsukuyomi was one of many proud and violent deities in Japanese mythology. He represented the moon in the Shinto religion. However, instead of being calm and serene, he was too focused on achieving order that he would do anything, even murder, to get it. But he likely regrets what he did now because he’s always racing after his wife, never to meet her again.