Leizi, also known as Dianmu (電母), is the goddess of lightning in Chinese mythology.

According to legend and folklore, she is one of five powerful Chinese gods in charge of creating storms. Her job as the Chinese lightning god is a special one that is often overlooked. Strange, though, for lightning can be hard to forget, especially when you’re in the midst of a terrible storm.

Who is Leizi in Chinese Mythology?

In Chinese folklore, the beginning of Leizi’s/Dianmu’s interesting story starts with her husband, the god Lei Gong. Her name means Lei Gong’s wife, a shortened version of Lei Gong Zi Qi. Lei Gong is considered the god or lord of thunder, and he is responsible for the booming thunder sounds during storms.

The Jade Emperor, the first god, gave Lei Gong a job. His job was to take revenge on evil human beings living in the world. He would send down thunderbolts to punish them for their evil deeds. That way, he was cleansing the earth of evil. Lei Gong traveled around doing his work in search of those deserving of his angry bolts.

Unfortunately, he wasn’t very good at it. Although Lei Gong’s thunderbolts were loud, his storms, however, were dark. He couldn’t see well enough to kill the right people or hit people at all. He often killed people the Jade Emperor didn’t wish dead, and he was often in trouble for his lack of skill.

This is where the goddess Leizi comes in. Leizi was a mortal woman who lived in a small village where she cared for her ailing and aged mother. One day, she took some rice husks to throw away outside; since her mother was too old, she couldn’t chew them. From above, as he passed over her village, Lei Gong saw her doing this. He caused a storm, and he sent down a bolt to strike her down for her evil deed. He thought she was wasting food and thus deserving of death. She died on the spot, and Lei Gong realized his mistake.

The Jade Emperor was furious at Lei Gong’s continued inability to strike down those in the wrong. He also took pity on the young woman, and so he resurrected Leizi as a goddess. The Jade Emperor bid Lei Gong marry her to take care of the woman he had wronged. As for herself, Leizi took on her new role as a lightning deity. She assisted Lei Gong with the storms as they traveled throughout the world.

Leizi was Lei Gong’s light to see his targets. She used flashing, polished mirrors to send streaks of lightning across the sky. That way, Lei Gong could see well enough to strike down those deserving to die so he can fulfill his duty. Lei Gong’s strikes were still not perfect, but with Leizi’s help, they were much more accurate. That is why we can see the flash of lightning during a storm before we hear its sound. Leizi is lighting Lei Gong’s way.

Along with Lei Gong and Leizi, three other Chinese gods help to create the storms that ravage our world:

These companions often travel together as a group, but it was not always the case. They more likely would travel together if there were many people in one area whom Lei Gong needed to remove. But Lei Gong and Leizi are always together, passing over the earth in search of the wicked. Together, they light up the sky and fill the world with the bellows of thunder.

Explanation: Why Use Gods and Goddesses? 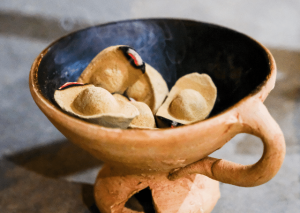 In many different mythology and folklore cultures, thunder and lightning gods are used to help describe and explain natural occurrences. Before we could use science to explain these things, people told stories to give themselves a sense of balance, stability, and understanding of the world that surrounded them.

Leizi/Dianmu, Lei Gong’s story, and their companions help to rationalize the sounds and events during a storm. The loud sound coming from the heavens is Lei Gong killing his victims as he passes over the land. Leizi’s flashes of light are there to help him with his aim so that he can perform his duty even better.

In China, they often use a saying, “sky beat thunder strike.” Lei Gong is often thought of as the one who can aid against enemies, so one can use the phrase against someone who has wronged them. Today, we know that thunder does not strike, but lightning strikes. Yet, at the start of myths and legends, it made sense that one would think a strike had come when they heard a loud sound.

Goddess Leizi’s Purpose: What is Her Role?

Some may think of the goddess of lightning as a terrible, horrifying figure. She did, after all, help her husband find those to kill by using mirrors to shine a light for him. She does have incredible power, for sure. But as a mortal woman, she was kind and helpful. She cared for her dear mother, and since she was an innocent victim, she now is in the sky as a goddess to protect others.

She helps Lei Gong to make his aim more precise. That way, innocent people are spared their lives, and it is only the genuinely guilty that die. This follows the Jade Emperor’s instructions. We have Leizi to thank for keeping us safe during a wild storm.

Fun Facts: Where Else Might We See Dianmu Mentioned?

We can still see the legacy of Leizi’s/Dianmu’s history today. She has never been forgotten. A few tropical storms have been named after the famous lightning goddess. In honor of Leizi’s power, Typhoon Dianmu was the name given to a typhoon that hit Japan in 2004.

Today, although we may not need to understand why storms happen, this myth is one to remember. It helps us understand and appreciate the power of nature and how destructive it can be. Thunder and lightning are not there to strike down bad people. But they can be terrifying and dangerous, ruining homes, lands, and livelihoods.

Indeed, powerful storms are very frightening because we are like victims to the whims of the gods in heaven. We stand and await whatever dangerous punishment they might inflict on us next. But we can take heart. At least Leizi is up there in the sky with her husband to help guide his aim. She uses her power for good. She allows Lei Gong to strike true and not take an innocent person from the world because he didn’t have enough light.