The Myth of Pangu: the Creator of the World 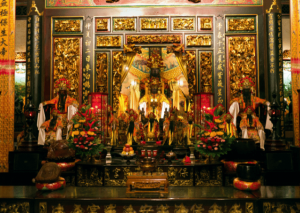 As he is considered the first of ancient China’s gods, there are many different versions of the myth of Pangu that have been shared through the centuries. In most versions of Pangu’s story, Pangu was believed to have rose from an egg that held the entire universe inside. As Pangu broke from the egg, the cosmos were released and the earth and heavens were created.

Pangu is often depicted as a creature covered in course hair from head to toe with a human face and horns. In artwork, he appears as short and stout, often holding hammer and chisel, holding an object such as the sun or moon, or the symbols for yin and yang.

A western missionary, James Legge, visited Hong Kong in 1847 and wrote “P’an-ku is spoken of by the common people as ‘the first man, who opened up heaven and earth.’ In Taoist picture books I have seen him as shaggy, dwarfish, and wielding an immense hammer and chisel with which he is breaking the chaotic rocks.”

Pangu’s name literally means ancient coil (pan = coil; gu = ancient). In the Chinese creation story, Pangu is typically presented as sleeping in a curled position inside the egg. When Pangu moved from his sleeping position, it was then the universe was born.

While Pangu is considered the Chinese creator god, most of Pangu’s existence was spent alone inside of the egg. It is believed there is only one myth where he had children, therefore he is not as popular as many of the other gods in the Chinese pantheon. Since the worship of ancestors is the driving force in China’s ancient societies, Pangu is honored as the subject of the Chinese creation myth but not much more.

Who Is Pangu In Chinese Mythology?

In Chinese mythology, Pangu’s birth from an egg containing the universe begins the unfolding of the earth and skies. While many faiths depict the creation of the cosmos as a conscious act by creator deities, in Chinese folk religion, the act of physical creation was created by a being simply breaking forth from a shell.

There have been many retellings of Pangu’s creation story. In all versions of the myth, Pangu and the cosmos are depicted as emerging from an egg. The most common version of the myth that is told today has been traced to Xu Zheng, the author who first to put the myth into writing during the Three Kingdoms Period sometime between 220 – 280 AD.

Xu Zheng wrote that there was once nothing but chaos. There was no universe. There was no earth or sky. Over a timespan of 18,000 years, the chaos began to swirl and gather around itself, finally coalescing into the shape of an egg. All of the substance in the far-flung chaos was now trapped in a tiny egg, and inside the egg the universe began to form. As the opposing forces of positive and negative energies came together, they began to battle and fight. Finally, over many years, the energies entered into perfect balance and Pangu was created.

As Pangu grew inside of the egg, he soon ran out of room. The creature began to wiggle and readjust, finally stretching and causing the egg to split into two halves and leaking its contents, creating the earth and sky. The yolk of the egg slid down and created the earth. The white of the egg floated up and created the sky, clouds, and stars. As Pangu emerged, the two eggshell halves flew up and became the moon and the sun.

In another version of the Pangu creation myth, the beginning of the myth is the same, with the universe coming together inside the egg and causing the genesis of Pangu. However, in this version of the myth, Pangu expends all of his energy attempting to break free of the confining space of the egg. After cracking the egg, Pangu attempts to stand. However, he is so exhausted he collapses and dies.

The blood that poured from his veins became rivers, and his arteries became ravines and canyons. His fur became the forests and the trees, and the fleas on his fur became animals. Pangu’s teeth, bones and marrow transformed into precious stones and metals, and his arms and legs became pillars that separated the earth from the sky. The hair that fell from his skull floated into the newly formed sky and became the stars and heavens.

In some versions of this myth, a dragon, a phoenix, a turtle, and a qilin (Chinese unicorn) assist Pangu in separating the heavens and the earth. After 18,000 years, Pangu died and like the other versions, his body created the different parts of the world. In this version of the myth, however, it is said that humanity was created from the parasites that covered Pangu’s body.

Other versions of the myth reveal Pangu as more of a creator god. In these myths, Pangu is considered the first supreme being. Although he is a giant, in artwork he often appears as a dwarf. He is also depicted as being covered head to toe in course hair or foliage, and with a hammer or chisel in his hands for carving out the earth and skies. Some of these myths also present Pangu as the creator of humanity, molding and chiseling them out of clay. 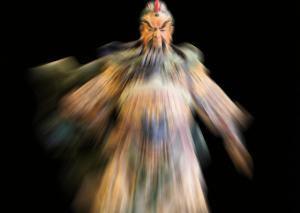 Taoists take particular interest in the Pangu mythos, as they believed that the egg is a perfect representation and encapsulation of yin and yang. As the chaos swirled around each other and coalesced within the egg, the balancing of the universal forces became yin and yang. In this version of the myth, as Pangu became self-aware, he used his axe to split yin and yang down the middle, causing the universe to break from the egg and flow out of it. Yin formed the earth, and yang formed the heavens.

Not wanting to be trapped, Pangu pushed yin and yang farther from each other. Using his arms and hands, Pangu lifted the yang over his heads. Using his legs and feet, he pushed yin further down. Pangu grew three feet and the earth grew ten feet thicker every day, and over 18,000 years the earth and sky finally met a place of perfect balance.

When the yin and yang were balanced between earth and sky, Pangu stopped growing and fell dead upon the earth, his arms and legs becoming the pillars that separated the sky from earth and leading to eternal balance.

There are so many versions and interpretations the Pangu’s creation myth, that missionary James Legge described Pangu as thus – P’an-ku is spoken of by the common people as “the first man, who opened up heaven and earth.” It has been said to me in “pidgin” English that “he is all the same your Adam”; and in Taoist picture books I have seen him as a shaggy, dwarfish, Hercules, developing from a bear rather than an ape, and wielding an immense hammer and chisel with which he is breaking the chaotic rocks.

An interesting twist in the Pangu mythos

While most Chinese folk beliefs honor Pangu, he is not as honored as other gods because he had no children. However, there is one culture that honors him as an ancestor.

The Buyei people of South China believe that Pangu did have children and they are his descendants. In Buyei culture it is taught that after Pangu created the world, he became an expert in cultivating rice. After marrying the daughter of Long Wang (the Dragon King), Pangu had a son named Xinheng.

Xinheng had a fiery temper and was very disrespectful. It is said that Xinheng was so terrible to his mother that one day she returned to heaven and never came back. Pangu and Xinheng begged her to return, but she ignored their cries. Pangu eventually remarried but died on the sixth day of the sixth month of his new marriage.

Xinheng’s life was not about to get easier. After Pangu died, Xinheng’s stepmother became abusive and almost killed him. To retaliate, Xinheng threatened to destroy the massive rice harvest that Pangu had cultivated before he died. Realizing that she was in the wrong, Xinheng’s stepmother made peace with him, and they promised to pay respects to Pangu on the sixth day of the sixth month every year. This day is celebrated by the Buyei people, and they pay Pangu respect as their original ancestor.

Although Pangu is not honored as an ancestor like many other Chinese deities, a festival celebrating him is given every year at the Pangu King Temple in Guangdong. Much like the creator god who was considered innocent and good-natured, Pangu’s festival is filled with dance, performance, incense, and the cooking of the fake roast pig.

In Chinese mythology, Pangu created the world when he cracked open the egg which held the balanced cosmos inside. Pangu is the first existent creature in the Chinese creation story, a living being before the universe began.

Thought of as innocent and benevolent, Pangu is still honored today by the Chinese as the creator of the world. While his story may seem strange at first glance, his myth is one of balance and creativeness. And one not easily forgotten.