Yue Lao: The Ancient Chinese God of Love and Marriage

In this in-depth bio, you will learn who Yue Lao is, his history, and the myths credited to his name.

To the ancient Chinese, love was not defined by a goddess, but destined by Yue Lao’s red silken threads. Known best from the tale, the Old Man Under the Moon, Yue Lao’s story has endured for almost a thousand years, and star struck lovers still seek his blessing today.

The ancient Chinese were firm believers in fate, certain that their days were recorded and foretold before they were born. This included the belief that couples were destined to be together. It is in Yue Lao’s Book of Marriages that the names of future couples were recorded, and it is Yue Lao that bound potential couples together with his red silken string.

Yue Lao’s full name is Yue Xia Lao Ren, which translates as The Old Man Under The Moon, as this is when he was known to appear.

When depicted in artwork and literature, Yue Lao appears as an older man with a cheerful expression, with long flowing hair and a beard the color of fresh snow. He wears yellow imperial robes, and in his hands are balls of red thread used to tie the feet of destined lovers together. And once tied, there is nothing on Earth that can stop the couples’ union.

Who is Yue Lao in Chinese Mythology?

In Chinese mythology, Yue Lao is known as the god of love and marriage. Yue Lao is an immortal and is believed to live in the moon, while other legends claim he lives in the “obscure regions” near the underworld. And while his story has persisted for over one thousand years, he is still actively prayed to today.

– The Story of Yue Lao, god of love 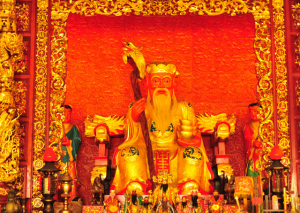 The first mention of Yue Lao comes from the ancient book, The Sequel to the Collection of Mysteries – Inn of Marriage Engagement and is found in the story The Old Man Under the Moon.

During the Tang Dynasty and in the 2nd year of the Yuan He era (approximately 807-810 AD), a young man named Wei Gu was on his way to visit a friend in Qing He. While walking alone with his servant through Song City (Songcheng), Wei Gu could not help but complain about his loneliness, as he had yet to find a suitable wife.

As Wei Gu walked in sadness, he noticed a strange old man sitting alone, bathed under the light of a full moon. In his hands was a large book, and as he got closer, Wei Gu could make out a smile on the old man’s face. Unable to hold back his curiosity, he asked the old man who he was, and what was so interesting in his book.

The mysterious man looked up from his book with a smile. In the moonlight, the old man’s hair was the color of snow, and a long beard rolled down his yellow robes. He said that he was reading from his Book of Marriages, which told him who would marry whom. And then he showed Wei Gu the red threads he used to tie the heels of man and wife.

Amazed, Wei Gu asks the mysterious man to walk with him through the city. The stranger smiled wide and stood, closing his book and marking his place with a red silken string. Wei Gu could not believe his good fortune. He was finally going to find his mate.

As they walked through the marketplace, Wei Gu could not contain his excitement any longer. He turned to the old man and asked if he knew who his partner would be. With another large smile the old man nodded. And to Wei Gu’s astonishment, the old man lifted a finger and pointed to a blind old crone and a three year old girl in her care, telling Wei Gu that the little girl would be his wife.

This enraged Wei Gu, as this poor young girl was obviously beneath his station. In fury, Wei Gu commanded his servant to stab the girl and Wei Gu stormed off, eager to leave the mysterious stranger and his silly prediction behind him.

Many years passed. Still desperate for a wife, Wei Gu heard that the governor of Xiang Zhou could not find a match for his daughter. Even though she was very beautiful, she walked with a terrible limp and bore a savage scar on her back. Unable to bear the shame of being alone any longer, Wei Gu offers to marry the young woman, and soon they were wed.

On the night of their wedding, Wei Gu asks his new wife how she received her scar. She told Wei Gu that when she was a young girl, and while with her caretaker, she was attacked in the market by a knife wielding man.

Wei Gu’s eyes grew, but he kept silent, knowing that he had caused the mysterious man’s prediction to come true. And over the next ten years, his wife bore him three children, two boys and a girl.

Wanting to find suitable matches for his children and knowing the power of the Old Man Under the Moon, Wei Gu began to search for the mysterious figure. And one night, Wei Gu chanced upon Yue Xia Lao Ren again.

This time, Yue Lao barely glanced up from his book as Wei Gu approached. Wei Gu demanded the old man tell him the who his children’s future partners were. Yue Lao frowned, closed his book and placed the red strings he had been rubbing between his fingers in his pack. Because of the cruelty in his youth, Wei Gu’s children would find no mates, and his bloodline would end.

– Alternate versions of the myth of Yue Lao

Over the centuries, the story of Yue Lao and Wei Gu took many forms. In some stories, the young woman wore a headband to cover a scar between her eyes from a rock that was thrown from Wei Gu. In others, the young woman’s scar is created by assassins hired by Wei Gu to disprove Yue Lao’s prophecy. In some versions, Wei Gu begs his wife for forgiveness. In others, he begs Yue Lao.

No matter which version of the story was told, the meaning was still the same– no matter your social status, your age, or regardless of your desires, what is written for your destiny in the Book of Marriages will come to pass.

How Yue Lao is revered today

As the stories of Yue Lao spread throughout China, soon temples arose. Yue Lao became known as the god of love and marriage, and his statues and temples were marked with red thread. Soon, both hopeful couples and those married began to wear red string bracelets to signify their commitment to one another, giving birth to the Chinese proverb marriage of a thousand miles bound by a string.

Yue Lao, the Old Man Under the Moon

Unlike other cultures that feature women as goddesses of love, in Chinese mythology it is an old man, Yue Lao, that is the god of love and marriage.

More than just a Chinese version of Cupid, Yue Lao’s power is still sought after today. What fate puts together none can tear asunder. To have Yue Lao’s blessing, is powerful indeed.