The Myth of Long Wang, the Chinese Dragon King 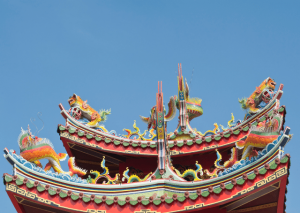 In Chinese mythology, the Dragon King is the lord of the waters and god of dragons. Also known as Long Wang (or Longwang), the Chinese dragon king is a powerful god that can control the dragons of sea and underworld, all the creatures in the oceans, the waves of the seas, and the weather.

The god of dragons lives an opulent lifestyle in a palace underneath the seas where he eats a diet of gems and commands an army of aquatic lifeforms. He can also shapeshift between dragon and human form. Considered ferocious, intimidating, and quick to anger, Long Wang is a fearsome deity that is the embodiment of yang.

The Dragon King is commonly worshipped in Chinese and Japanese coastal communities, as his favor is important to those living near the sea. The god of dragons, although fearsome, is seen as representative of benevolence and fortune, and is believed to represent chi (qi) energy. Long Wang is also seen as the curer of droughts and responsible for rainfall throughout the coast lands.

Among Chinese deities, beliefs in the dragon gods are some of the oldest, as dragons have been revered in China from the most ancient of days. As it was common for the ancient Chinese to believe that reptiles represented evolution from their ancestors, artifacts of dragons have been found dating over seven thousand years ago (Henan’s Yangshao Culture – 5th century BC). Other dragon artifacts, including bits of jade believed to signify rank, have been found dated to the Hongshan cultures of 4,000 BC.

Long Wang is typically depicted in two forms – as a human persona and as a zoomorphic dragon. As a human, the dragon god appears as a fierce warrior with intricate, flowing royal robes and long dark beard. His skin and eyes are deep red, representing his ferociousness. As a dragon, the Dragon King is typically depicted in the Chinese dragon style, with a long snake-like body with four legs, many horns, a beard, and sharp claws.

Depending on the artist, the color of his scales change, but are most often presented as red. In the oldest Chinese texts, the Dragon King is described as having a horse like face with wings along its side.

Who is Dragon King in Chinese Mythology

In Chinese mythology, the Dragon King is the god of the seas and of dragons and receives his orders directly from the Jade Emperor. Long Wang is also revered as a weather and water deity and is honored as the giver of rain. The Dragon King is also the patron guardian of a number of Chinese coastal towns and bodies of water.

In Chinese myth, Long Wang has four younger brothers, also dragons who can shapeshift into human form – Ao Run oversees and guards the West Sea; Ao Qin the South, Ao Guang the Eastern, and Ao Shun over the North. As the Dragon King, Long Wang’s younger brothers answer to him. Long Wang lived in a great palace under the sea where he lived a decadent lifestyle eating gems and precious stones. His brothers each had their own smaller palaces, and when they visited one another, they would speak telepathically.

The Dragon King has many thousands of descendants, including a daughter named Sagara who becomes a Buddha in The Lotus Sutra. It was also common for early Chinese emperors to claim direct descent from the Dragon King to better establish themselves as fierce and powerful.

Most myths of the Dragon King present him as an aggressive and turbulent personality, quick to anger and reaction. As the yang persona, he was the opposite of the goddess Mazu’s (the female Chinese sea goddess known for her kindness and benevolence) yin.

The most famous legend of the Dragon King reveals how Long Wang achieved godhood through the methods of the Buddha.

The Dragon King fathered thousands of children, but only one of them became famous as a student of Buddha. Long Wang’s eight year old daughter, Sagara, once saw a beggar and felt compassion for him. Seeing his suffering, she gave the beggar a rare jewel as a gift. Unbeknownst to her, the beggar was actually Buddha in disguise.

After revealing himself and seeing her potential as a student, the Buddha took Sagara under his tutelage and taught her the dharma. Even though it annoyed the Dragon King greatly (due to his impulsive and impetuous personality) that his daughter was now a disciple of Buddha, he honored Sagara’s wishes and did not prevent her learning under the Buddha’s wing.

– The Ministry of Waters 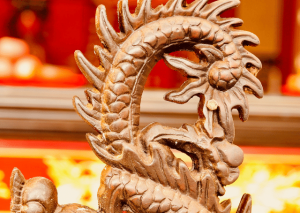 Long Wang and his brothers, the Four Dragons, oversaw the larger lakes, seas, and oceans of Earth. Working with four freshwater dragons (rivers and streams), the nine dragons served as the Ministry of Waters, with Long Wang as the head. As they ruled over all of the waters of the planet, they ruled over the weather as well. It is still customary in times of drought to call out for the blessing of Long Wang to release the waters from heaven.

While Long Wang is often represented by many colors, his four brothers each have the color that represents the four cardinal directions:

Although the Dragon King is considered the monarch over the Four Dragons, Long Wang does receive orders and decrees from the Jade Emperor.

In later Chinese myths, the name Long Wang came to represent the combination of the Four Dragons and the Yellow Dragon, Huang Long, with the latter representing earth. The Yellow Dragon also represented the Yellow Emperor, the first emperor of China and legendary Chinese sovereign.

Belief in the Dragon King today

The belief in Long Wang is still common today in China’s coastal villages and communities. His favor is especially sought after in times of drought. Like the goddess Mazu, temples to the Dragon King are commonly found along shoreline roads and are also found at the end destinations of seafaring travelers.

In Chinese mythology, the Dragon King (also known as Long Wang) is the lord of the waters and god of dragons. The Chinese Dragon King is revered as a god that can control the dragons of the underworld and seas, all the creatures in the oceans, and the weather.

The Dragon King is an enduring Chinese mythological figure who is still greatly revered in China. With legends of dragons going back over 7,000 years, the Dragon King is in no danger of being easily forgotten.